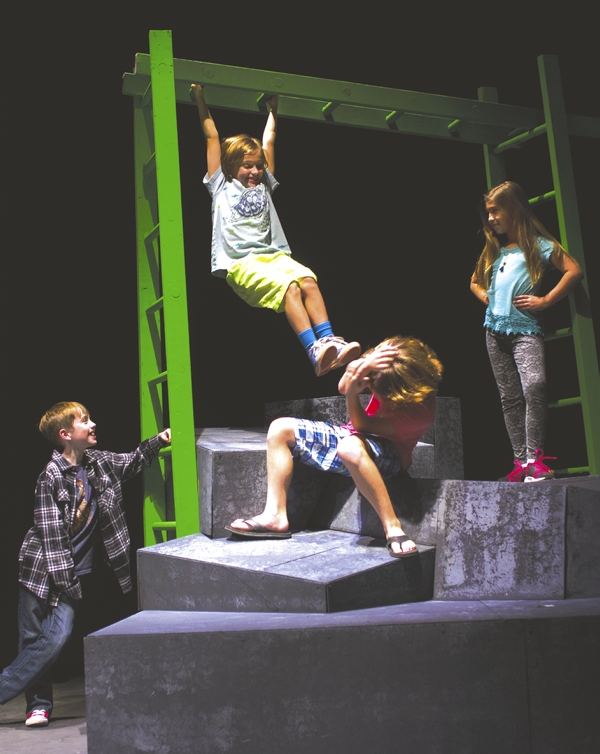 Cooper Thomason, back, as Fudge swings on the monkey bars in front of Clinton Efird, left, Eli Thomason, middle, and Jordan Dry, right, in Piedmont Players Theatre's youth production of 'Tales of a Fourth Grade Nothing'. KRISTI CRAVEN/ SALISBURY POST

Youth theatre is in Blume at the Norvell I can easily recall sitting in elementary school, book in hand, popcorn-reading Judy Blume’s “Tales of a Fourth Grade Nothing.” It’s been ages since I last laid eyes on a Blume novel, but sitting in the Norvell auditorium and watching this production made me feel as though I read it yesterday.

Not only was this production side splittingly-hilarious, it was by far one of the most endearing shows I’ve seen on the Norvell stage.

Clinton Efird, a Piedmont Players Theatre newcomer, walked the stage as if he’d been performing on it for years. He was a hilarious Peter Warren Hatcher, an older brother who is the glue in his chaotic family, and the narrator of the entire show.

Jordan Dry was an adorable and sassy addition as Sheila, a perfect representation of the little girls who run the world. And who could forget Fudge? Cooper Thomason becomes the epitome of annoying little brothers.

The story centers on a young boy, Peter, who is faced with a challenge of writing an essay for school. As he debates what his topic should be, he walks the audience through several significant storylines throughout the past few months. He occasionally pops into the story as his character, but Efird does a fantastic job of breaking the fourth wall appropriately to keep the audience in the loop with the chain of events.

Director/Designer Reid Leonard, with the help of PPT’s brilliant tech team of Allen Jones and Greer, have once again created a world that flows masterfully, allowing the characters to tell the story across several New York City locations. A large set piece displays the current scene, which is each a separate chapter in Peter’s essay, and each one is even better than the last. By the end of the show, audience members from 8 to 80 will be relating to the struggles of young Peter Hatcher.

With birthday party catastrophes, pet problems and nightmares of the pressures of growing up, Piedmont Players Youth Theatre has once again created a show with the most capable and wonderful kids to bring a beloved story to life. It’s certainly a tale of young actor something!