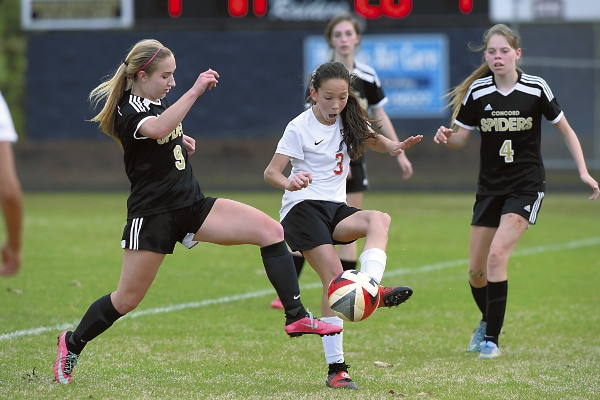 LANDIS — It appears the South Rowan girls soccer team has skipped all of the ugly growing pains and blossomed ahead of schedule.

The Raiders were supposed to be “next year’s team” after winning only three South Piedmont Conference matches last spring. But Friday’s 3-1 victory against visiting Concord was their seventh in 11 decisions this season — ornamenting a story that has surprised everyone but themselves.

“We talked about taking baby steps,” second-year coach Kyle Neal said after South scored two second-half goals and improved to 9-4 overall. “But this has been more than that. Really, we only added one player into the mix, but she’s Madison Henry, and she’s been a tremendous help.”

Henry, a freshman forward, has made all the difference. She contributed a goal and and a assist against Concord (4-10-1, 2-9) and has a team-best 18 goals this season. She also hit the crossbar twice and had a doorstep shot swallowed by Concord keeper Savannah Cooper.

“(Henry) hits the ball well and puts it on frame,” said Concord coach Taylor Strode. “She’s not only a goal-scorer, but someone who scores when it matters most.”

Henry assisted on South’s first goal at the nine-minute mark. She beat a defender and advanced the ball down the right side, then centered a pass for well-positioned teammate Rhiannon Kimmer. The sophomore tapped a short-range grounder past Cooper for her 10th goal.

“I didn’t hit as hard as I wanted to,” Kimmer said after netting her sixth goal in the past six matches. “But I was happy it found its way to the back of the net. Madison and I really do work well together.”

Concord answered midway through the first half when sophomore sniper Julia Patrum — runner-up in last season’s SPC Player of the Year vote — tied the score. She emerged from a scrum with the ball about 30 yards from the cage, dribbled through a seam and fired a shot that ricocheted off the right post and fell behind South keeper Michelle Rivera.

“We tried to keep the pressure on (Patrum),” Rivera said after making 10 saves. “I usually try to forget what’s going on, zone out and just focus on her. But on that one we had a bad clear and she got free. I tried to cut it off but just didn’t move fast enough.”

Halfway through, the Raiders had been outshot 10-4 and forced to play too much defense.

“We needed that halftime break,” Neal explained. “We needed to regroup because we weren’t executing at all. We needed better passing, better communication. That’s what I told them.”

It wasn’t Churchill’s “Fight Them On The Beaches” speech, but it did the trick. South regained the lead just 2:17 into the second half when junior Mary Jester redirected a low corner kick by teammate Katelyn Goodman and inadvertently deflected the ball past Cooper.

“It caught us off guard,” Strode said. “We expected that corner to go high into the box, but it went low to the front post. We were set up the way we wanted to be. It was just a lapse in concentration.”

Misfortune struck the Spiders with 13:11 remaining when Patrum — a 27-goal scorer this season — rolled an ankle while making a play near the Concord sideline.

“She makes a huge difference for them,” Neal said. “You have to know where she is at all times.”

With Patrum out of the game, South junior Taylor Mauldin no longer had to mark the all-region forward and joined the offense. “When Julia went out, it gave us more freedom,” said Neal.

South capitalized when Henry closed the scoring with 3:54 to play. Following a turnover, she gathered a loose ball and found herself alone in space about 25 yards from the net. But instead of attacking, she launched a high, wind-blown shot that floated over Cooper’s extended arms.

“After missing those three (shots) in the first half, I didn’t know if I should take that one,” Henry said with a post-game smile. “Now I’m glad I did. I especially appreciate Raquel (Landaverde) for helping me make that happen. She made the steal, did the work.”

It just added, Henry indicated, to the feel-good atmosphere at South these days.

“If we stay together and keep communicating, I think we can go far in this conference.”