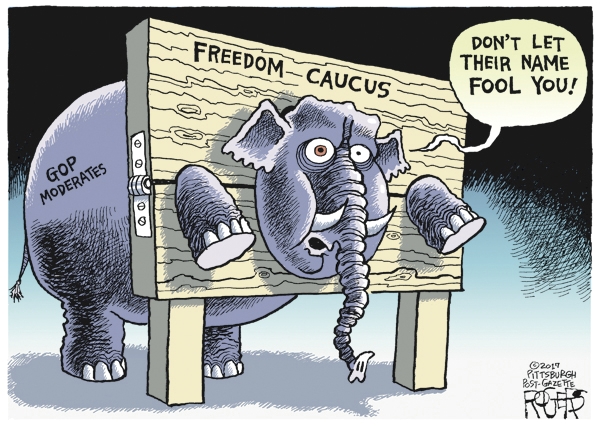 Is the Republican Party capable of governing?”

That question was posed on NBC by Mick Mulvaney, President Donald Trump’s budget director. So far, the answer is no. And until party leaders stand up to their own right-wing purists — Sen. John McCain once called them “wacko birds” — the answer will continue to be no.

The crushing defeat of the Republicans’ health care overhaul is just the latest symptom of a chronic condition that has crippled the House GOP for years. A determined band of about 35 ideologues, calling themselves the Freedom Caucus, has dominated party policy by opposing virtually any initiative that violates their narrow-minded orthodoxy.

Their adamant opposition was not the only reason the health care bill died — it was a poorly drafted, widely derided document that failed to generate public support — but the Freedom Caucus was the biggest factor in the measure’s demise.

Former Republican Sen. Judd Gregg summed up the problem facing his party for The Washington Post: “Most of the people who are in opposition to this have never governed, don’t know how to govern, and don’t want to govern. Unfortunately, Republicans now control the government and have to learn how to govern.”

They cannot govern if the crazies call the shots. This is a vast and diverse country, comprising countless economic, regional, political, racial, religious and ethnic interests. The only way to govern America effectively is through a spirit of compromise and consensus.

But that is the exact opposite of the Freedom Caucus’ theology. To its members, compromise is betrayal, and consensus is treason. Rep. Ted Poe of Texas resigned from the group after the health care debacle and blasted his former friends on CNN: “There’s some members of the Freedom Caucus, they would vote no against the Ten Commandments if they came up for a vote.”

Another Republican, Mike Coffman of Colorado, said of the caucus: “They vote as a bloc. And so you’ve got to penetrate that bloc … We’ve got to figure out how to do that.”

Coffman’s correct, but that will be very hard to do. For one thing, the Freedom Caucus has been highly successful, frustrating former Speaker John Boehner so badly on issues like funding the government and reforming immigration that he resigned in disgust.

Moreover, the group does not exist in isolation. It enjoys the strong support of outside pressure groups, like Heritage Action and the Club for Growth, which reinforce the rigidity and thrive on constant agitation. As a Wall Street Journal editorial noted, “Legislative compromises don’t help Heritage Action raise money for its perpetual outrage machine.”

That “outrage machine” is fueled as well by incendiary talk radio hosts and websites, who swell their audiences and incomes with incessant assaults on the whole notion of accommodation.

Caucus members are largely insulated from political accountability because they represent safe districts and have only one fear: a primary challenge from the right. And party leaders have lost many of the traditional tools they once used to keep members in line.

Withholding campaign funds as a pressure tactic no longer works, because members today can raise cash directly from wealthy donors like the Koch brothers or individual supporters around the country. And leaders cannot barter votes for “earmarks” — appropriations that favor projects in a member’s district — because they were banned years ago.

So the president and his congressional allies are left with a profound problem. Despite Poe’s defection, fragmenting the Freedom Caucus will be difficult. So what are the options for the rest of the GOP?

If they kowtow to the “wacko birds,” whatever bills they produce would be far too extreme to pass the Senate. If they defy the caucus, they won’t have enough Republican votes to pass anything. Which leaves a third option: working with the Democrats.

Sen. Lindsay Graham, a Republican from South Carolina, was talking about health care, but his words apply to a whole series of issues crowding the agenda: raising the debt ceiling, passing a budget, reforming taxes, refurbishing infrastructure.

“I don’t think one party is going to be able to fix this by themselves,” Graham told a town meeting. “So here’s what I think should happen next: I think the president should reach out to Democrats.”

Many Democrats, however —  pressured by their own hardliners on the left and encouraged by Trump’s plunging poll numbers — have decided that massive resistance to Republican rule is their best route to political revival.

Still, Mulvaney’s question hangs over Washington. If Republicans don’t at least try to work with Democrats, doubts about their ability to govern will continue to grow.