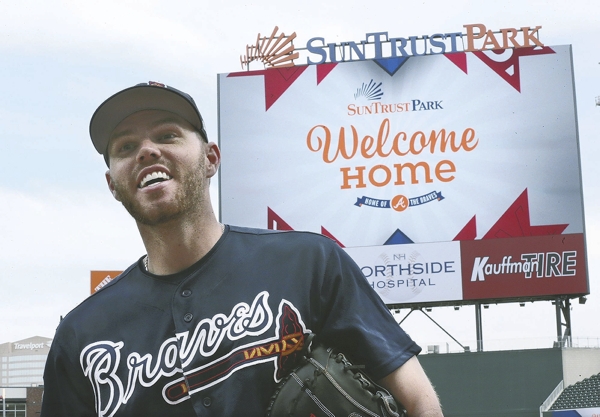 ATLANTA (AP) — Workers scurried around baseball’s newest stadium Thursday, screwing in a row of seats, stocking up the concession stands and hauling away construction debris.

In the surest sign that the first pitch was just 24 hours away — they also watered down the infield.

Amid the flurry of last-minute touches, the Atlanta Braves held their initial workout at SunTrust Park, tuning up for an exhibition game Friday night against the New York Yankees.

The $622 million stadium appeared largely ready for a game that will serve as a tuneup for the regular season, giving team officials a chance to discover any kinks and make adjustments where necessary.

The players certainly reveled in the chance to move into a brand new facility.

“I don’t care how much money they’re making or how long they’ve been in the game, it’s a fun thing,” manager Brian Snitker said. “For a lot of these guys, it’s their first time here.”

The exhibition game is limited to season-ticket holders, meaning the 41,500-seat facility will only be about half full. The first regular-season home game, April 14 against the San Diego Padres, is a sellout.

The Braves moved to the suburbs after 20 years at Turner Field near downtown Atlanta, taking advantage of a sweetheart deal from Cobb County that included some $400 million in public funding and the land to build a mixed-used development adjacent to the new stadium.

The massive complex, known as Battery Atlanta, includes restaurants, shops, a music venue, apartments, an office tower and even a hotel. But much of it remains a work in progress, scheduled to open in phases during the season and perhaps into 2018, which was apparent from the giant crane looming beyond the center-field scoreboard.

But Mike Plant, the Braves’ executive who oversaw the project, pointed out that the stadium was built in just 2 1-2 years and most parts of the complex will be completed within three years. He added that the first apartment residents were set to move in Friday, while that unsightly crane will come down before opening day.

“We’ve pushed the envelope on the timeline, which is very aggressive,” Plant said. “I made sure everyone that signed up for us understood there was no grace period here.”

Former Braves manager Bobby Cox was running the team when it moved into Turner Field in 1997.

He is impressed with the new stadium, which has four decks and a more intimate feel than its predecessor.

“I think it turned out beautifully,” Cox said. “I thought it would be hard getting one better than Turner Field, to be honest with you. But they did. They got it right.”

While a boost in attendance is expected in Year 1, there are plenty of concerns about how SunTrust Park will be received by the team’s fan base. Most of the uncertainty stems from Atlanta’s notorious traffic.

The new stadium — which is about 12 miles northwest of Turner Field — sits alongside two of the metro area’s most congested interstates and isn’t served by MARTA, the city’s mass transit system. Many fans, especially those east and south of the city, could be facing a nightmarish commute to games.

Nevertheless, the Braves are looking forward to a new era.

The team is optimistic about contending for the playoffs after a massive rebuilding job that led to consecutive seasons with more than 90 losses and a last-place finish in the NL East a year ago.

On a warm, sunny afternoon, the mood was certainly upbeat as the team took batting practice for the first time in its new digs.

When Freddie Freeman sent a pitch over the left-field fence, coach Eddie Perez quipped, “I’ve never seen anyone do that.”

Everyone got a good laugh.