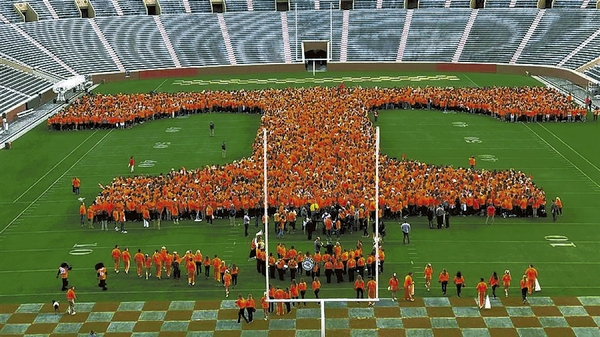 Photos courtesy of Joan Palmer Students and others — 4,223 people in all — formed a giant ‘T’ to set a world record at the University of Tennessee on Wednesday.

It was a day when a weatherman became a letterman, and Rowan County’s Sarah Ferguson was a part of it.

As the third stop on his weeklong “Rokerthon 3,” Al Roker, the longtime weatherman on NBC’s “Today Show,” showed up at the University of Tennessee on Wednesday morning and enthusiastically helped in the formation of the world’s largest human letter.

Students and others were among the 4,223 people dressed in orange who formed the giant “T” on the football field of Neyland Stadium in Knoxville. They held the “t” for a good five minutes.

Ferguson, a 2016 graduate of West Rowan High School, was in the middle of it all, and even found some face-time with Roker on television. Her proud grandmother back home in Salisbury, Joan Palmer, was able to take a photograph of Sarah on television during one of Roker’s live reports.

Ferguson is a member of the UT dance team. Ferguson’s mother is Amanda Ferguson-Davis, and her stepfather is Josh Davis.

“Sarah is a wonderful dancer and has won several state awards,” Palmer said Wednesday. “Amanda is from Tennessee, and UT was the only college Sarah applied for and, of course, made the dance team. It was quite an event this morning — fun and exciting.”

The power “T” serves as the University of Tennessee logo, and the marching band routinely forms the “T” during its football performances — but not one as big as Wednesday morning’s.

Roker’s Rokerthon had visited the University of Oklahoma on Monday and Northern Michigan University on Tuesday.

At Oklahoma, Roker helped the students set Guinness World Records for the largest human images of a cloud and lightning bolt. At Northern Michigan, he was part of the world record for the largest game of freeze tag.