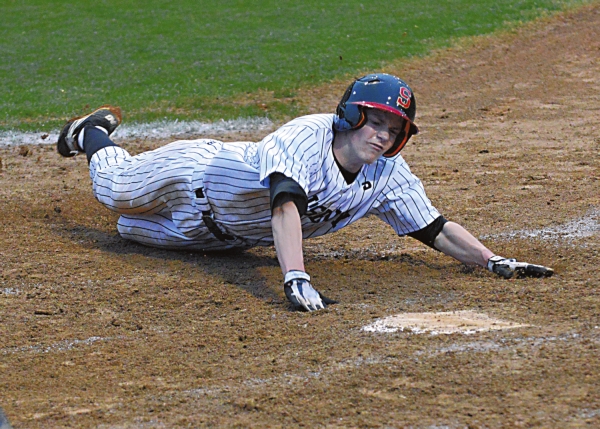 SALISBURY —  Chandler Lippard is seeing it so well right now that it’s like he’s taking his hacks at volleyballs.

Lippard went 2-for-3 in Thursday’s soggy 6-2 Central Carolina Conference win against East Davidson.  The out he made was on a well-hit fly ball to center. He’s batting .531 for the season, and when you’re batting .531, it requires a bit of luck as well as skill.

Lippard got a break on his first-inning line drive to right field. After a slip and a slide, a potential out evolved into a run-scoring triple that put the Hornets ahead to stay.

“Our guy looks like he’s got a bead on it, and  then he slips on the wet grass,” East Davidson coach Dan Patton said.

There was no good fortune involved on Lippard’s smash to left field for an RBI single in the middle of Salisbury’s decisive, five-run second inning. That hit was smoked.

“Lippard has hit it hard all year,” Salisbury coach Mike Herndon said. “It’s not like he’s getting a bunch of dink hits, and we’ve been facing some pretty good arms.”

Speaking of pretty good arms, Salisbury right-hander Joe Steinman (3-1) was stout for five innings against the Golden Eagles, who had edged the Hornets, 3-2, on Tuesday. Jack Fisher, a big lefty with a bright future, finished things off for the Hornets.

“I’m not a speed pitcher, so I just tried to spot the ball and let my defense back me up,” Steinman said.

Steinman was able to pitch with a lead after Griffin Myers whipped a double down the left-field line and scored on Lippard’s triple in the first.

Then, with buckets of rain falling at Robertson Stadium, the Hornets put together a big inning in the second. Will Taylor ignited it with a base hit and a steal. Steinman jumped on a high pitch from East Davidson starter Darin Spivey and whacked it for a run-scoring single. Myers bounced a single through the left side for a 3-0 lead. A throwing error made it 4-0. Lippard’s solid hit made it 5-0. A dropped popup and it was 6-0.

“Our starting pitcher wasn’t on like he can be, and we didn’t play very good defense, either,” Patton said. “And Salisbury played flawless. They threw a lot of strikes and made all the plays.”

Steinman had a no-hitter until the third, but the Hornets flirted with disaster in the top of the fourth. The inning opened with a walk to East Davidson’s .500 hitter Dylan Schultheiss. After a bloop single by Spivey and a solid single by Austin McIntrye, it was 6-1.

Adam Fore then lifted  a high drive to medium left field. It looked routine until Salisbury left fielder Jay Murphy suddenly slipped as he moved to grab it. Then it got very exciting. Fisher, the center fielder, saved the day. He sprinted over and was able to make the catch in the straightaway left field. It was a sacrifice fly, making the score 6-2, but it could have been a whole lot worse.

“Jack made a great hustle play, and it easily might have been a different game if he doesn’t make it,” Herndon said. “He was doing what he was supposed to be doing, coming over, backing up, and he was in position to make that play.”

Steinman, who struck out two, didn’t have any trouble in the fifth inning. Fisher allowed a couple of hard-hit fly balls in his two innings, but Murphy and Steinman, who had switched positions with Fisher, had no trouble running them down.

Fisher was hurt his freshman year, but he has a chance to be a difference-maker.

“We’re going to be careful with him,” Herndon said. “He’s going to be a very valuable arm.”

Salisbury managed six hits, including two each by Lippard and Myers.

“We hit the ball a lot harder tonight than we did against them on Tuesday,” Steinman said.

It was a vital early win for the Hornets (6-5, 2-1), who earned a split with a contender. The CCC race figures to be wide open.

“We’ve got experienced pitchers and we’ve got our 3-4-5-6 hitters back,” Patton said. “We expect to have a  solid chance in every game we play.”

But on Thursday, the Hornets were the more solid team. They struck out eight times, but they played errorless ball, while East Davidson (5-6, 1-1) made three miscues.

“It  just feels great to bounce back and beat them,” Lippard said.