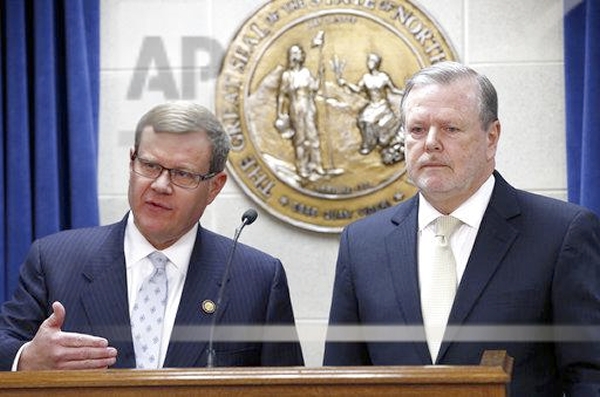 RALEIGH (AP) — The Latest on a compromise proposal to overturn North Carolina’s “bathroom law” (all times local):1:35 p.m.A bill rolling back North Carolina’s contentious LGBT “bathroom bill” has passed the General Assembly and is now headed to the governor’s desk.Democratic Gov. Roy Cooper has said he supports the measure. Republican legislative leaders announced a compromise with the governor late Wednesday night and the measure passed quickly in both the Senate and the House on Thursday.

Not everyone is pleased with the deal. Social conservatives would prefer to have House Bill 2 stay on the books. Gay rights groups believe the replacement bill still allows discrimination.

LGBT and civil rights activists in North Carolina are decrying a deal they say replaces one discriminatory law with another.

Sgro says the proposed legislation doesn’t change the fact that the law excludes LGBT people from state anti-discrimination protections. He says if the General Assembly’s Republican majority and the Democratic governor enact their negotiated deal, it will postpone LGBT protections for four years until local governments could be allowed to tackle changes.

North Carolina NAACP President the Rev. William Barber says the new bill is convoluted and is a furtherance of discrimination.

Two-thirds of the chamber’s 50 senators approved the bill Thursday. The bill will now go to the House for a vote.

One of the sponsors of House Bill 2, Sen. Dan Bishop, spoke out against the new deal.

A compromise to end North Carolina’s “bathroom bill” has crossed an early hurdle when it was approved by the state Senate rules committee.

After the committee’s approval, it will face a full vote Thursday by the Senate. Then the House will vote on it.

Social conservatives prefer keeping HB2 while gay rights groups say only a complete repeal will do.

A version of the bill released Wednesday night would prevent local governments from passing new nondiscrimination protections for workplaces, hotels and restaurants until December 2020.

A transgender man who works at the University of North Carolina, Joaquin Carcano, spoke against the deal during the committee meeting.

Carcano says this proposal doesn’t repeal House Bill 2 but only replaces it with a “new form of violence” against LGBT people and is sacrificing “our lives and our safety for the sake of basketball.”

Gay rights activists are across the street from the Executive Mansion, protesting a deal to repeal a North Carolina law known as the “bathroom bill.”

The demonstrators tried to get the attention of Democratic lawmakers as they made their way to a caucus meeting held by the governor. Others held placards and pleaded with lawmakers to oppose the measure.

One of the protesters, the Rev. Jimmy Creech, a longtime pro-LGBT activist, said the bill was just a repackaging of House Bill 2 and would still hurt gays, lesbian and bisexual and transgender people.

The new law would prevent local governments from passing new nondiscrimination protections for workplaces, hotels and restaurants until December 2020.

The ACLU issued a statement urging lawmakers to vote against the plan announced late Wednesday by Republican legislative leaders and Gov. Roy Cooper, a Democrat.

The statement issued Thursday says the proposal would keep anti-LBGT provisions of the law in place and continue to single out transgender people. The ACLU also says Cooper should veto the measure if the Republican-dominated legislature approves it.

Legislative leaders and Cooper hope the version to be voted on Thursday will remove obstacles to expanding business and attracting sporting events.

About a dozen protesters gathered outside the Executive Mansion in Raleigh early Thursday, calling on Democratic lawmakers to vote no. Cooper was hosting Democrats, urging them to support the plan.

Republican legislative leaders in North Carolina and Democratic Gov. Roy Cooper say they have an agreement to end the state’s “bathroom bill” that they hope removes any obstacles to expanding businesses and attracting sporting events.

But they’ll have to get enough votes for a proposal set for debate Thursday so the replacement measure for the law known as House Bill 2 can pass. Social conservatives prefer keeping HB2 while gay rights groups say only a complete repeal will do.

The agreement announced Wednesday night comes as the NCAA has said North Carolina sites won’t be considered for championship events from 2018 to 2022 “absent any change” in HB2. Decisions would be made starting this week.

HB2 has caused some businesses to halt expansions in North Carolina and entertainers to cancel concerts.