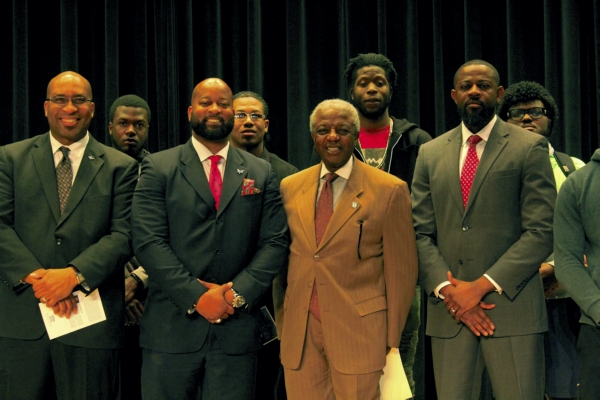 SALISBURY — There is an often-quoted saying by Livingstone College President Jimmy Jenkins: “A picture is worth a thousand words.”

Jenkins says he also believes a role model can serve that same purpose by giving his students an example of someone who took the right pathway to a better life.

On March 20, Jenkins invited men of the college to a “for men only” assembly to hear three young, high-achieving and successful men he met at the recent CIAA Basketball Tournament in Charlotte. Jenkins thought after meeting them that they could be good role models who could have a positive influence on the men of the college.

Richard Rolle, Abraham Cannon and Vernon Jones, great friends who now think of themselves as “three brothers,” accepted Jenkins’ invitation to share their stories with the men of Livingstone.

A chance meeting and a conversation during the basketball tournament led Jenkins to learn that the three men share similar backgrounds and experiences with the students of Livingstone. Despite the challenges they faced in their youth, they became successful in their careers. Jenkins asked them to tell their stories of how they overcame economic and social barriers.

Richard Rolle Jr. is an oral surgeon who lives and works in Charlotte. He serves in an official capacity under that title for the Charlotte Hornets NBA team, the regional hockey team the Charlotte Checkers, and the University of North Carolina-Charlotte. Abraham Cannon has his own insurance agency, and Vernon Jones is a vice president for Wells Fargo.

Rolle received his bachelor of arts degree in psychology from the University of Notre Dame, where he had success playing football under legendary coach Lou Holtz. Rolle then earned his doctor of dental surgery degree from Meharry Medical College’s school of dentistry in Nashville, Tennessee. He completed his oral and maxillofacial surgery internship at Harvard’s Massachusetts General Hospital in Boston and a residency at Nova Southeastern University in Fort Lauderdale, Florida.

Cannon was adopted at the age of 13. His name was changed, and his life changed too. Despite the perils of his youth and an unstable home environment, Cannon graduated from Clemson University. He attended on a full academic scholarship. In addition, he was a Bank of America Scholar and intern. Cannon is a marketing and branding expert whose clients include two of Charlotte’s top 10 fastest-growing companies.

His Allstate Insurance agency ranked No. 1 in Charlotte and No. 3 in North Carolina, and it was one of the fastest-growing agencies in the Southeast for new customer acquisition. Cannon also served for three years on an Allstate agency advisory board as an advocate for policies that helped improve Allstate agents’ profitability. When he’s not in the “lab” with his latest project, an insurance tech startup named Quotehub, he spends his spare time acting. He appeared in the Kendrick Brothers blockbuster film “War Room,” playing the role of Clyde Williams, and the independent film “Education in Love” by Trey Riley.

Jones was born and raised in Los Angeles. After high school, he joined the Air Force and served for six years in both the United Kingdom just outside London and at the National Security Agency in Laurel, Maryland. During his military assignments, he continued his education through the University of Maryland’s Overseas Division and Anne Arundel Community College in Arnold, Maryland. Upon completion of his military obligations, Jones was honorably discharged and was immediately hired by Ford Aerospace Corp. (now Lockheed Martin). Jones is currently partnered with Bank of America as a bilingual business consultant to small and midsize businesses that generate annual income ranging from zero dollars to $5 million. In addition to his business pursuits, he is an accomplished songwriter and musician.

At the men-only program, all three of the “brothers” shared experiences in their lives, periods of time when challenges were difficult and stories of how those circumstances were educational or horrible. Yet through all the times of challenge, these moments helped shape them to be what they have become.

“Someone always stepped in to smooth the way,” Rolle said. “What I had to realize is to look at what’s important now. It was a major lesson I learned from Coach Holtz.”

Cannon’s advice to the Livingstone men was to “go for the goal.”

“The men who came to this event today were impressed, they were moved, and they were engaged and engaging,” said Jenkins. “When I met them, I became excited about what a teaching moment this would be for the men on our campus.”