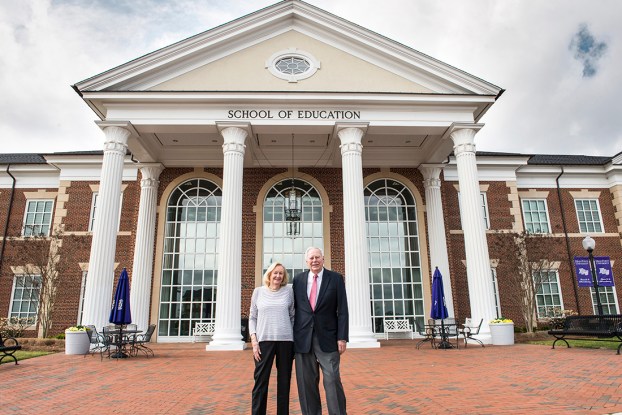 Pictured are Maggie and Robert “Bob” Stout in front of the Stout School of Education. Submitted photo

The Stouts, longtime business, civic and city leaders in the Piedmont Triad, have donated $5 million to the school.

Bob Stout is a lifetime High Point University board of trustees member who retired from Steel Bar Corp. in Greensboro. He served as chairman for Goodwill Industries, the Greater Greensboro Open (now the Wyndham Championship on the PGA Tour) and a number of other groups in the Triad. He graduated from the University of Tennessee, where he played football, and served in the U.S. Air Force.

Maggie Stout grew up in Kernersville and worked as a medical secretary. Her mother was a first-grade teacher at Forsyth Country Day School.

The Stouts have a long history of supporting High Point University and have previously established a scholarship for business students. They are also strong supporters of several nonprofit organizations, including the United Way of greater Greensboro. They are members of Sedgefield Presbyterian Church.

“Bob and Maggie’s stewardship exemplifies the caring spirit that we model on our campus,” says university President Nido Qubein. “The impact of this gift will benefit not only our future teachers but the lives of students in their classrooms.”

In recognition of the family’s commitment to the community, High Point University will name the school of education in their honor.

The school houses literacy and LEGO Education initiatives such as the “come build with us” LEGO events, which have welcomed more than 10,000 children to focus on creativity-based, problem-solving activities.

A new 31,000-square-foot facility opened in 2012 to house the education and psychology departments in technologically advanced classrooms, computer labs and offices. It features high-tech education equipment such as smartboards, a children’s book library, math and science touch-screen games, a methods lab designed to look and feel like a real elementary school classroom, a Mac lab, and psychology research booths.

More than 300 High Point University graduates are teaching in the Triad.

The university has raised more than $300 million since 2005 without a formal campaign.