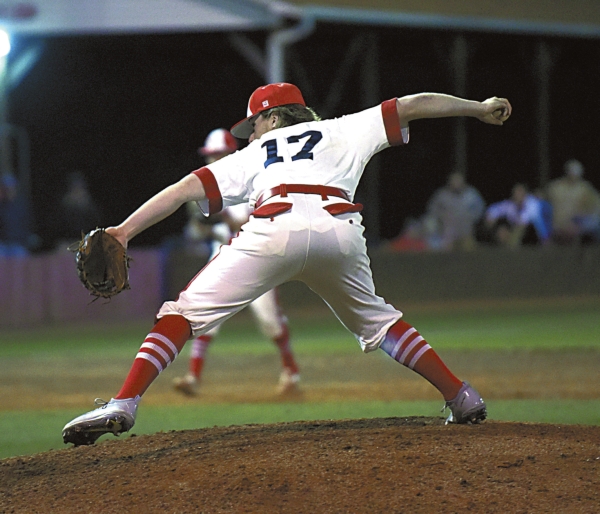 GRANITE QUARRY — East Rowan packed all of its offense into the early innings, then used a quartet of pitchers to make it stand Wednesday night at Staton Field, a key 4-2 league win against Cox Mill.

The Mustangs (8-5, 7-3 SPC) kept themselves close to the top of the South Piedmont Conference standings by notching their third win in a row.

With the SPC beginning the second half of the league season, East is now part of a three way tie for second (with West Rowan and South Rowan), one game back of leader Carson.

“Every win in this league is so big,” said acting Mustang head coach Brett Hatley. “You just can’t take anybody lightly.”

That was definitely the case last night as East scored three in the second to go up 4-0, then Hatley pulled all the right strings with his pitchers to hold off the Chargers (7-4, 6-4 SPC).

Pitching controlled the pace as well for both sides as the game was completed in an efficient one hour, 50 minutes.

Senior sidewinder Colby Myrick pitched three effective innings to start the game for East with freshman lefty Jake Davis (1-3) coming on to handle the fourth and fifth to notch his first varsity win.

Junior Corbin Moss nailed down the sixth with a pair of strikeouts then senior lefty Hayden Setzer dominated the seventh with two more strikeouts to earn his first save.

“We had to really compete against them,” said Moss.”They are a good fast ball hitting team, so we had to bear down.”

For the Chargers, sophomore Griffin Gardner (2-2) took the loss despite a strong outing which included eight strikeouts. But the decisive second inning proved his undoing as the Mustangs racked up three singles and took advantage of pair of walks.

Senior Chandler Blackwelder provided the big hit for East with a two-run single to make the score 4-0. Moss also brought in a run with a bases-loaded walk.

“We just have to get the hits at the right time,” said Blackwelder, who is batting well over .410 for the season with 13 RBIs. “We have got such a good pitching staff that if we get four or five runs, we have a good chance to win.”

Blackwelder gave the Mustangs the quick lead in the first inning, in an unorthodox fashion when he singled to lead off, went to second on a wild pitch, then stole third base. The catcher’s throw on the steal attempt sailed into left field, allowing Blackwelder to trot home for the 1-0 lead.

After the big second inning, East was unable to mount any further offensive threats against Gardner, as they managed just a pair of singles over the next four innings. But it didn’t matter with the solid pitching by the Mustangs.

“We pitched by committee tonight and that was the game plan going in,” Hatley said. “We have such a strong pitching staff and I trust the guys we’ve got on the mound this year.”

The Charger finally did get on the board in the top of the fourth with a single run. Singles by Justin Sponseller and Connor Ledet opened the inning against Myrick. Davis came on to pitch and induced three ground-ball outs but one run scored.

Moss replaced Davis in the top of the sixth when Sponseller led off with a single. Another single put runners at second and third, then Cox Mill made it 4-2 on a groundout by John Brosnahan. But Moss slammed the door with a strike out of Justin Fox to strand a runner at third.

Setzer, who is slated to get the start tonight when East heads to face the first-place Carson Cougars, took full control in the top of the seventh inning with two strikeouts and a groundout in just 13 pitches to nail down the win.