Column: NASCAR off to a fast start, but ratings still sink 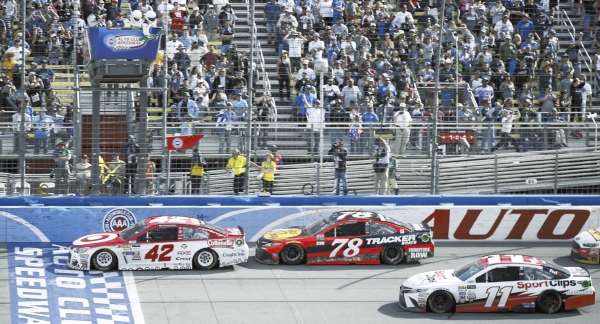 CHARLOTTE (AP) — Bad news first: The overnight television ratings for NASCAR’s race in California were down. The ratings were down for Phoenix, Las Vegas and Atlanta, too. Basically, nothing NASCAR does can stop this slide, it seems.

So what’s the good news?

Well, NASCAR really couldn’t have asked for a better start to its season.

Five drivers won the first five races. The lead changed in the waning laps each time.

Kyle Busch got into a fight on pit road that left him with a bloody gash on his forehead — generating all sorts of mainstream attention — and nobody was punished. Similarly, Austin Dillon avoided any penalty when he wrecked Cole Custer in retaliation.

Danica Patrick, for one, argued NASCAR did the right thing by withholding heavy-handed punishments.

“It makes for good TV,” she said, “and we handle it on the track ourselves.”

Professional partier — oh, and NFL star — Rob Gronkowski was the main attraction at the season-opening Daytona 500, and celebrities came out in full force to watch NASCAR on Sunday in Fontana, California. Among the many in attendance were Jada Pinkett Smith, Kaitlin Olson, Dean Cain, Terry Crews, Fred Savage, Scott Eastwood and Justin Hartley, “Kevin/The Manny” from NBC’s hit “This is Us,” who apparently caught NASCAR fever and attended various events over the last few months.

For all the hand-wringing over the ratings slump, NASCAR appears to be headed in the right direction.

Heck, even Clint Bowyer, one of the largest personalities in the series, is emerging from his lengthy slump. He finished third Sunday and wrote on Twitter: “first time in a long time I grabbed the bottle of Jack in the plane for the right reason.” Trust us, a happy Bowyer is good for everyone in NASCAR.

There’s parity among the manufacturers — Chevrolet, Ford and Toyota all have wins this season — and the younger drivers have found themselves in the mix every week. Kyle Larson, victorious Sunday, in theory could have five wins already this season. He ran out of gas while leading the Daytona 500, notched three consecutive runner-up finishes, then finally finished first at Fontana after several nail-biting restarts.

But the bad news always comes on Monday, when the TV numbers are released. The ratings become the main focus of the sport: Naysayers fixate on decline; excuse-makers trot out all manner of explanations.

How about this? NASCAR, no matter how many story lines or rule changes or celebrities lining the grid, is an underwhelming overall product. Even with its new stage format, events are too long in this day and age of instant gratification — even the NFL recently announced ways it is going to try to shorten games — and the racing itself often isn’t all that exciting until the end.

Another issue is that viewers are essentially being asked to tune in to watch colorful cars go in circles for 500 miles. When the cars themselves become the “stars,” it’s a lot harder to become emotionally invested in the product. It doesn’t help that Jeff Gordon, the sport’s biggest star for more than two decades, is now in the TV booth and Tony Stewart, the man of the people, is also retired.

The people left who need to be embraced are stuffed into cockpits, wearing helmets, and aren’t heard from until the end of the event. Their personalities are hidden, too. It’s so different from, say, the NCAA Tournament, which once a year makes celebrities out of basketball players few have heard of.

Gonzaga center Przemek Karnowski has a beard of Bunyanesque proportions that earned its own Twitter account and made him famous over the last two weeks. North Carolina forward Luke Maye hit the shot of his life — the game-winner Sunday over Kentucky to send the Tar Heels to the Final Four — then received a standing ovation when he showed up for his 8 a.m. class back in Chapel Hill on Monday.

Most other sports provide an opportunity for fans to feel the tension, see and hear the emotion, experience the highs and lows of the participants in real time. NASCAR hasn’t found a way to capture that, barring, of course, an angry Busch stomping down pit road at Las Vegas to take a swing at Joey Logano.

That’s as big a problem for NASCAR as the length of its races, its over-saturated 11-month schedule and the constant corporate-speak of its drivers. Figure out a way to show us more — take off the sunglasses, be engaging, give us energy and passion — and then maybe people will start watching again.