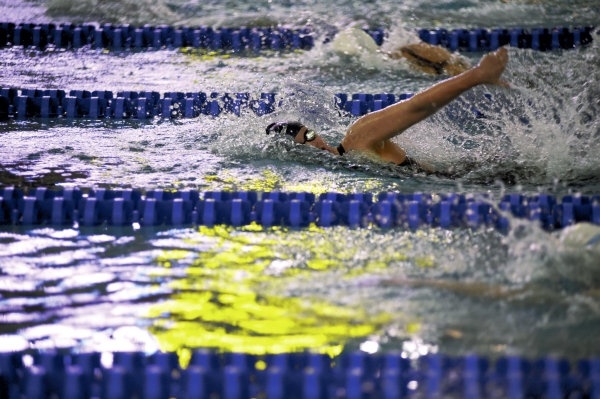 CHARLOTTE — Queens junior McKenzie Stevens just took two weeks off from swimming, but for the next 50, she’ll keep pushing herself, training at least 20 hours per week.

Stevens, a 2014 Salisbury High graduate, is an 11-time All-American now, with her latest four All-America medals coming during Queens’ push to its third straight Division II national championship in Birmingham, Ala., on March 8-11.

Individually, Stevens placed third in the 200 freestyle and 200 butterfly for the Royals. She added second and third-place finishes, respectively, in the 800 and 400 free relays.

Stevens has grown from contributor to leader and served as a team captain as a junior, but she’s still driven to accomplish more. She’s been a part of two national championship relay teams — one set the D-II record in 2015  in the 800 yard freestyle — but she hasn’t been an individual national champion yet.

She’s got one more shot at that.

“I know there are a lot of things I can improve on,” Stevens said. “I’ve reached a lot of goals, but definitely not all of them.”

Stevens won 1A/2A state championships in the 200 free and 500 free during her high school career, so it was a bit of a surprise when she signed with Division II Queens. But Stevens wasn’t looking for a big school, she was looking for a place that offered her academic interest (exercise and sports science) and had a chance to do special things. She wanted the close-knit team feel of a small school — and found it.

Queens didn’t even have a swimming program until 2010 and has no divers, but the Royals placed 10th in the nation in 2013, the first year they had a pool to call their own, and they moved up to third in 2014. They also had a coach in Jeff Dugdale, who is regarded as one of the best in the country.

It’s all worked out. Now Stevens is a three-time national champ.

“Things have gone as well I could ever have hoped,” Stevens said. “Choosing Queens was a great decision for me, and I’ve never had any reason to regret it. In high school and club swimming, you’re just working so hard for great times. But being part of national championship teams, that’s a totally different feeling  than an individual championships. It’s a great feeling.”

Academically, Stevens is a perennial All-America scholar. She plans to make applications to physical therapy school as a senior.

As a freshman, Stevens helped Queens win its first national title in Indianapolis. She was an All-American in the 200 freestyle and 200 butterfly as well as a national champion on that record-setting 800 freestyle relay unit.

After years of building a powerhouse, Queens lost a lot of talent after the 2016 championship season.

“I think that’s what made this third championship different from the others,” Stevens said. “In the beginning, at least, no one expected us to be able to win it again. Even the coaches didn’t think we had enough to do it, but we found different ways to get it done. We were able to pull it off.”

Stevens was one of the leaders, in and out of the pool.

“Our women were the little engine that could,” Dugdale said. “They were not going to be denied nor told that they could not. They did an excellent job in avoiding drama and bought into the message that championships are won in the locker room. Our leadership was stellar and the work ethic like I have never seen. Their legacy will be one that I talk about for a long time.”

This year’s championships in Birmingham were held in conjunction with the D-II wrestling and track and field national championships. Birmingham had the feel of a mini Olympic Games.

“With all those athletes from other sports there, supporting and cheering for each other, it was exciting,” Stevens said. “We had opening and closing ceremonies like the Olympics.”

Between those ceremonies, Stevens turned in a series of productive races, and Queens, in second  place after the first day of competition, roared back to claim another championship.

“There’s no secret,” Stevens said. “It’s just a matter of putting in the work, training with great teammates and great coaches.”

On the final day at the CrossPlex in Birmingham, Stevens was 10th in 50.80 seconds in the 100 freestyle for Honorable Mention All-America status in that event.

Then she swam the anchor leg on the 400 free relay, the final event of the Championships. Queens finished third for 32 points. Stevens was the last female Royal in the pool before another celebration started.

Stevens does some baby-sitting and coaching youngsters in addition to the time she puts into the pool herself, but she still managed another 4.0 GPA last semester.

Can she make it 4-for-4 as far as national championships next spring?