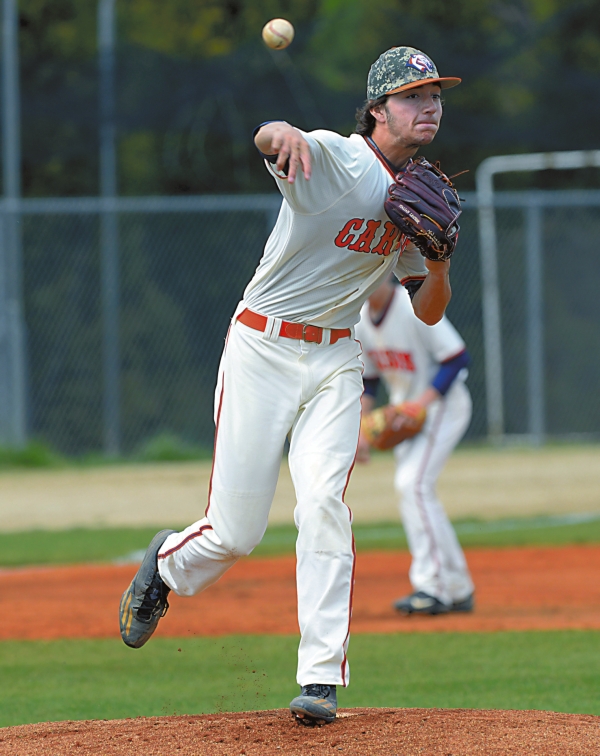 CHINA GROVE — There are still plenty of good seats available on the Carson baseball bandwagon.

“We’re glad to be where we are,” coach Chris Cauble said after Carson (10-3, 9-2) won for the ninth time in its last 10 outings and maintained a one-game lead in the conference standings. “We’d much rather be nine-and-two than five-and-four. We have to keep coming ready to play. We have to come with the same mentality we played with tonight.”

The Cougars used a take-what-they-give-you formula to beat East (8-6, 7-4) for the second time. Right-hander Owen White — the junior who spun a dazzling no-hitter when the teams met March 7 in Granite Quarry — pitched a complete-game four-hitter and out-dueled Mustangs’ lefty Hayden Setzer, who yielded only three hits in six innings and lost for the first time.

Carson secured the win with a pair of unearned runs in the last of the fifth.

“Coming into the season, we knew we were going to be a good team,” said Carson catcher Garrett Alewine. “Right now, we’re trying to stay humble, trying to keep ourselves in check. We still come into every game ready to fight.”

They had to fight back in this one. East put runners on base in every inning but the seventh and scored the game’s first run in the top of the first. It began when leadoff batter Chandler Blackwelder drilled White’s second pitch into the right-center field gap for a double. Setzer’s sacrifice bunt moved him to third base and John Owen’s sac bunt to the right side made it 1-0.

“Chandler hit a hanging curveball,” White said after fanning six, walking three and winning his fourth game. “He did what a batter is supposed to do — hit a pitcher’s mistake.”

When he returned to the Carson dugout, White said he and Alewine had a little pow-wow.

“I knew we had to fix it, somehow,” he noted. “So I talked to my catcher about eye levels and locating pitches and where to put his glove. We worked it out.”

“Yeah, but with him it doesn’t matter,” he said. “He’s consistent and he adjusts as he goes alongs. One thing Owen White does that goes unnoticed is how well he holds runner on and how good he is at fielding his position. He’s one of the best I’ve seen at that.”

White threw out four base runners, including East’s Jax Fitz at second to squash a fourth-inning rally. Including Blackwelder, the Mustangs put only four runners in scoring position. “Pitching for Carson — with a good defense behind you — it’s a lot easier than with most teams,” White said. “Solid defense. That’s what we preach and practice.”

Carson tied the score against Setzer, a four-game winner, in the bottom of the second. Luke Barringer lined a leadoff single into left field and Clayton Gilmore coaxed a walk. Both advanced on a wild pitch and Barringer scored on a sacrifice fly by sophomore Cole Hales.

“That’s called finding a way to score,” Cauble said afterward. “Both teams had plenty of opportunities to score runs, but neither one of us was very good at it. Cole managed to hit that ball deep enough to score a run.”

Hales also initiated Carson’s two-run fifth inning when he feathered a leadoff single to left. Pinch-runner Sollie Holshouser replaced him and advanced to second with none out on a misplayed bunt. White, batting with one away, struck the ball that determined the outcome — a groundout to East second-baseman Matthew Mathis. But when Holshouser stumbled rounding third base, first-baseman Corbin Moss unleashed an across-the-diamond throw that sailed into foul territory for a two-run error.

“With a wet field and a wet ball, I didn’t think he had enough to get him,” Hatley explained. “In that situation, you’ve got to be sure you can throw him out.”

The rest was up to White, who was as sure as a Bob Gibson fastball down the stretch. He retired eight of East’s final nine batters, four of them on strikeouts.

“The goal is to play as hard as we can every game,” White said. “Two games back-to-back is always a tough week, but the dugout was with us tonight. The dugout had a great game.”

NOTES: White, who threw 103 pitches, was more sturdy than spectacular. Setzer may have been sharper, collecting six strikeouts and two walks in an efficient 87-pitch outing. He allowed only three singles. … This marked the first time Carson has swept a regular-season series from East. …ER head coach Brian Hightower is expected back in uniform on Monday, when the Mustangs play at Concord. Hatley went 3-2 in his stead. Carson hosts J.M. Robinson the same night.