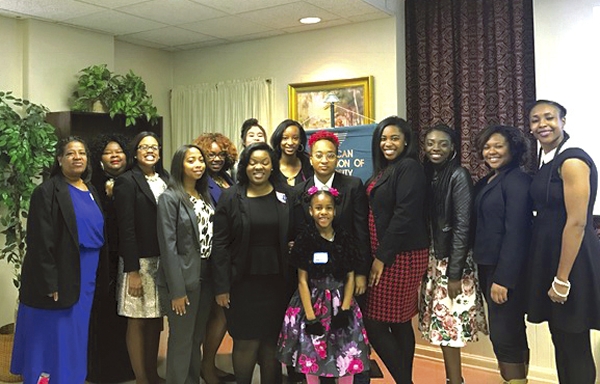 SALISBURY —“Education is power, and education changes lives,” according to Janet Spriggs.

She was the keynote speaker at the Women’s History Month brunch sponsored by the Salisbury affiliate of the American Association of University Women.

The celebration of women in education, held at First United Church of Christ on March 18, opened with music by local singer Theresa Moore-Mitchell, who sand “Witness” and “He’s Got the Whole World in His Hands.”

The audience included 50 women and men of all ages.

Moore-Mitchell is a vocal instructor at both Livingstone and Catawba colleges and has performed throughout the country and internationally for over 29 years.

Spriggs, who is chief operating officer at Rowan-Cabarrus Community College, gave a video presentation on the theme “The roots to grow and the wings to fly: Changing the world with the power of education.”

“Education gives us roots to support and nourish us,” said Spriggs. “Education also gives us wings so we can fly, making progress and changing the world.”

She went on to highlight two women who changed the world through education. In the early 1800s, Mary Lyon learned to read at age 3 and later fought to go to school, which was prohibited for women at the time. She went on to found Mount Holyoke Seminary.

The brunch was a benefit to send two Livingstone College students, Renae Moses and Tiaria Arnette, to the National Conference for College Women Student Leaders, which will be held at the University of Maryland in early June. Vincia Benjamin Miller and Shameika Stokes, representatives of Livingstone College to AAUW, introduced the two scholarship recipients. This is the seventh year that the Salisbury branch of the association has awarded scholarships to local students to attend the conference.

President Carol Cody and Patricia Trueblood, program vice president, also participated in the program, along with treasurer Eileen Hanson-Kelly. The brunch was prepared by Kelly’s Kitchen, under the direction of Kelly Varnager.

Since 1881, the American Association of University Women has been one of the nation’s leading voices promoting education and equity for women and girls. The Salisbury branch was founded in 1951. For more information, go to http://salisbury-nc.aauw.net or email hansonkelly@ctc.net.