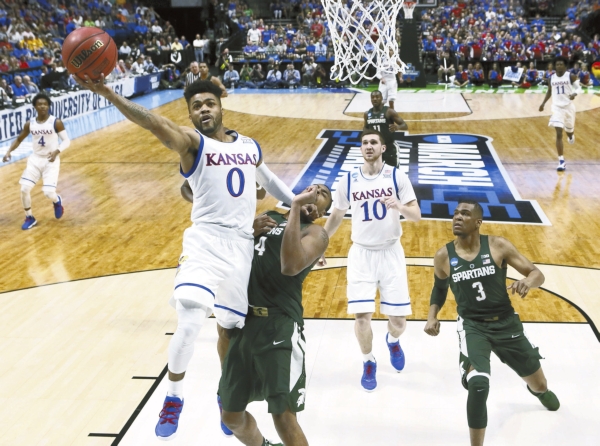 Frank Mason III was a last-minute recruit for Kansas. He turned into the Jayhawks’ latest All-American.

The senior guard was the only unanimous selection to the 2016-17 AP All-America team Tuesday, receiving all first-team votes from the same 65-member national media panel that selects the weekly AP Top 25.

“I love the kid and I think he knows how I feel about him, but I’ve never been more proud — not that he’s won a postseason award — but he’s done everything that he’s supposed to do,” Kansas coach Bill Self said. “He’s been a great teammate, he’s been tough as nails, he’s worked his butt off, he’s loved by everyone in the academic departments, graduated, and to see him reap these benefits after putting in so much time is an unbelievable honor.”

The rest of the All-America team includes guards Josh Hart of Villanova and Lonzo Ball of UCLA, plus forwards Caleb Swanigan of Purdue and Justin Jackson of North Carolina. Votes were based on the regular season and conference tournaments.

Mason is the first All-American from Kansas since Thomas Robinson in 2012.

Hart, a senior who was key to Villanova’s 2016 national championship, averaged 18.9 points and 6.5 rebounds for the Wildcats. He received 62 first-team votes.

Ball, who has already declared for the NBA draft, took the country by storm as a freshman. He averaged 14.6 points, 6.1 rebounds and 7.9 assists while putting UCLA back on the national map in a hurry. He received 54 first-team votes.

The last All-American from UCLA was freshman Kevin Love in 2008.

“He’s a better player overall,” North Carolina coach Roy Williams said. “He’s better defensively, better rebounder, he can score the basket and he’s just had a year for us.

“He’s been the leader of our team on the court, on the stat sheet. I couldn’t be happier for him because he’s really got it the old-fashioned way,” Williams said. “He’s worked, he’s put in the sweat.”

Nigel Williams-Goss of Gonzaga led the second team and was joined by fellow juniors Dillon Brooks of Oregon and Johnathan Motley of Baylor, sophomore Luke Kennard of Duke and freshman Malik Monk of Kentucky.

There has been at least one unanimous All-America pick the last four seasons.