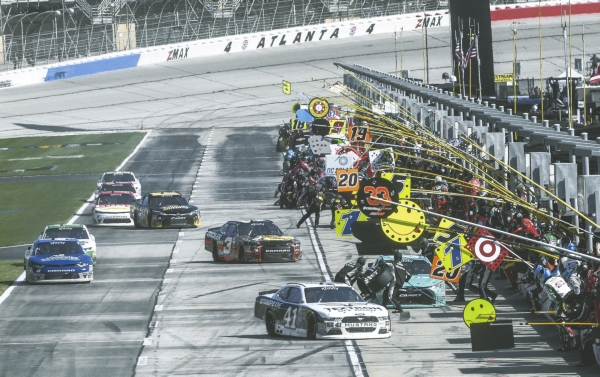 FILE - In this Saturday, March 4, 2017, file photo, Kurt Busch (41) pits along with other drivers during the NASCAR Xfinity auto race at Atlanta Motor Speedway in Hampton, Ga. Busch won the race. Atlanta Motor Speedway has postponed its plan to resurface the 20-year-old racing surface after numerous complaints from NASCAR drivers. Track officials have decided to delay the project at least until after the 2018 NASCAR weekend, providing another year of "high-speed slipping and sliding." (AP Photo/John Amis, File)

After numerous complaints from NASCAR drivers, the track announced Thursday it has postponed the repaving of the 20-year-old racing surface at least until after next year’s race weekend.

“We appreciate all of the input we have received from key individuals in the NASCAR industry, as well as our customers,” Clark said.

“The overwhelming majority have urged us to hold off on paving so that we can enjoy at least one more weekend of high-speed slipping and sliding in 2018 before the new surface is installed.”

The 1.54-mile surface was last paved in 1997 when the track was reconfigured into its current quad-oval layout. Since then, it has hosted 32 Cup races, as well as a total of 36 races in NASCAR’s other two national series. In addition, there have been eight ARCA Racing Series events, four IndyCar Series races and countless U.S. Legends and Bandolero car races on the quarter-mile circuit in front of the main grandstands.

After Atlanta’s NASCAR weekend this month, which featured races in all three major series, the overwhelming majority of drivers expressed a preference for the aged, abrasive surface, saying it make the racing more challenging and exciting.

“Drivers hate repaves,” Brad Keselowski said after his March 5 victory in the Cup race . “My hope is they can get another year or two out of it.”

But the longer the resurfacing is put off, the greater the chance that a race could be delayed by crumbling asphalt or water seeping up through the track, known as “weepers.”

Atlanta plans to continue its extensive maintenance program in an effort to prevent further deterioration. In addition, patch work on the current asphalt will be carried out where necessary.

Track officials will reevaluate its condition following the 2018 NASCAR tripleheader weekend and determine then whether to go forward with the resurfacing plans, which called for new asphalt to be poured on top of the current asphalt.

“I feel bad for those guys because all it takes is one race where there’s weepers or where the track comes apart and you’ve got red flags and delays and everybody gets mad at them,” Keselowski said. “The reality is that nothing last forever, and this surface had made it a really, really long time.”

Turns out, it will make it at least one more year.