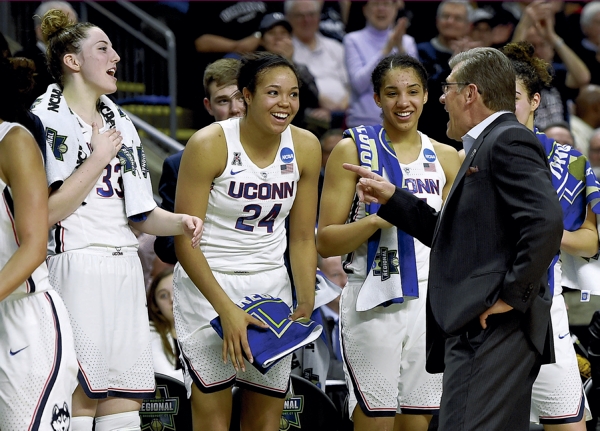 BRIDGEPORT, Conn. (AP) — Everything UConn lost to graduation made another Final Four even more special for Geno Auriemma and his Huskies.

Napheesa Collier scored 28 points, Gabby Williams had 25 and the Huskies advanced to the national semifinals for the 10th straight year with a 90-52 victory against Oregon on Monday night.

“There were a lot of question marks going into the season and maybe they didn’t have any in their own minds,” Auriemma said. “They seemed to answer every single one of those questions. They deserve to be in the Final Four. They earned it.”

The Huskies’ 111th consecutive victory moved Auriemma past Pat Summitt for the most NCAA Tournament wins. Auriemma now has 113 and counting.

Next up for top-seeded UConn (36-0) is Mississippi State on Friday night in Dallas. It is just two wins away from a fifth consecutive title and 12th overall.

“It means a whole lot, especially with this group because no one thought we’d be here and we worked so hard this year,” said Collier, who earned most outstanding player of the region honors.

The Huskies jumped all over 10th-seeded Oregon (23-14), stopping its impressive run through the tourney.

Leading 6-4, UConn scored 17 straight points. Saniya Chong got the game-changing burst started with consecutive 3-pointers. Nearly 41/2 minutes later she capped the burst with a layup that made it 23-4.

Oregon closed to 34-21 midway through the second quarter, but UConn put the game away by scoring 15 of the final 18 points of the half.

“They’ve owned the whole month of March, they weren’t just along for the ride,” Auriemma said. “It’s theirs and that’s a huge step. That’s a big step to go from riding in the backseat on a trip you’re going to, to all of a sudden you’re in charge of driving the bus you’re responsible for getting us there.”

With Breanna Stewart, Morgan Tuck and Moriah Jefferson gone to the WNBA, UConn has a new trio leading the way. Collier and fellow sophomore Katie Lou Samuelson were honored as AP All-Americans on Monday, with Williams, a junior, making the second team.

The Ducklings upset seventh-seeded Temple, No. 2 Duke and No. 3 Maryland to get to the Elite Eight for the first time in program history.

“I just think all of it is part of the process,” Graves said. “A run like this will make it easier to motivate our team in the offseason. Our goal is to host the first and second round and not to make two trips across the country. Those things will really help us and give these guys confidence that they can win in the tournament.”

Oregon: The Ducks were trying to become the first double-digit seed ever to reach the Final Four. Only 10th-seeded Lamar and 11th-seeded Gonzaga had made it this far. The Zags were also coached by Graves. … Oregon took advantage of Bridgeport’s proximity to New York and visited the Freedom Tower and Times Square on Sunday after practice.

UConn: The win was UConn’s 135th straight against an unranked opponent. The Huskies have won 310 of past 311 against non-Top 25 teams. The lone loss came against St. John’s in 2012. Since the 1993-94 season, UConn is 587-9 against unranked teams. … The victory gave Chong and Tierney Lawlor 152 wins at UConn, the most in the history of the NCAA for a senior class. They only have one loss.