Spirit: This is a good place to start 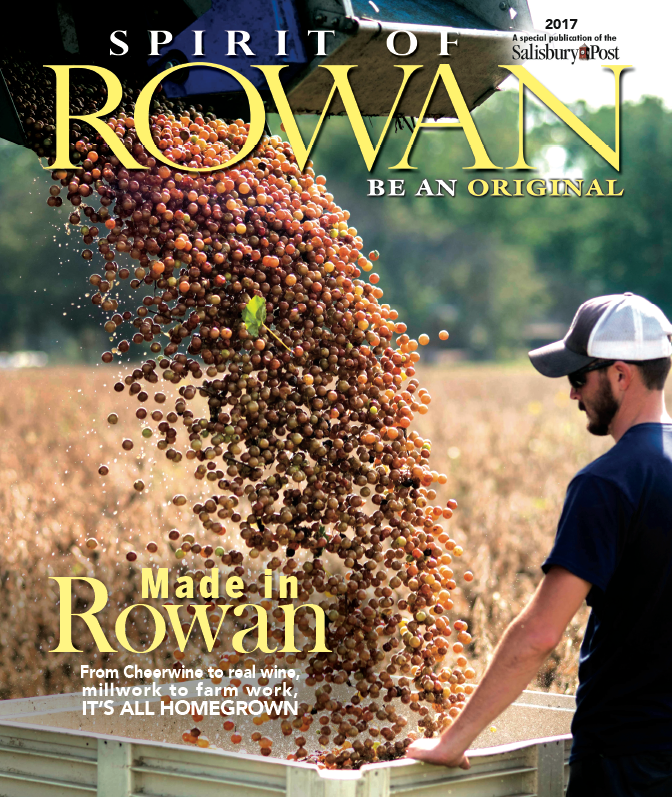 From Cheerwine to real wine, millwork to farm work, it’s all homegrown.

That’s one way to describe this section, the Salisbury Post’s third annual “Spirit of Rowan.”

Inspired by the “Be an Original” theme of the county’s rebranding campaign, we decided to take a look at the goods and products that have roots in Rowan soil — literally and figuratively.

We didn’t have to look far. Agriculture has always played a vital role in our rural community. This section includes stories on some of the newer twists.

The wine industry, for example, is a relative newcomer here, and it is thriving, as Deirdre Parker Smith writes in “Wines & vines.”

On the livestock front, Lee and Domisty Menius have plugged into the rising interest in animals raised in real pastures — “Fresh and local,” as the headline on that story says.

More than a third of the county’s acreage is farmland, and raising crops on that land is a little like a lottery, reporter Josh Bergeron learned. Find out more in “Golden harvest.”

Custom millwork from Salisbury can be found in some of the finest buildings in the state, thanks to the high standards of the folks at Goodman Millwork. Susan Shinn Turner shares their story in “Wood men.”

Bubbly and sweet, Cheerwine is one of Salisbury’s proudest claims to fame. With the fifth generation now involved, the company is celebrating “100 years of cheer.” Susan Shinn Turner tells their story.

Another kind of beverage is spawning new businesses here — craft beer. “Big things brewing” includes breweries and a new malt house, thanks to the reporting of Deirdre Parker Smith.

This county also produces college graduates. Rebecca Rider takes a look at two people who grew up in Rowan, attended Catawba College and went to work for the school system in “Homegrown.”

So goes the circle of life.

Consider this section a sampling of the countless good things that originate in Rowan County — and people who take pride in being homegrown.