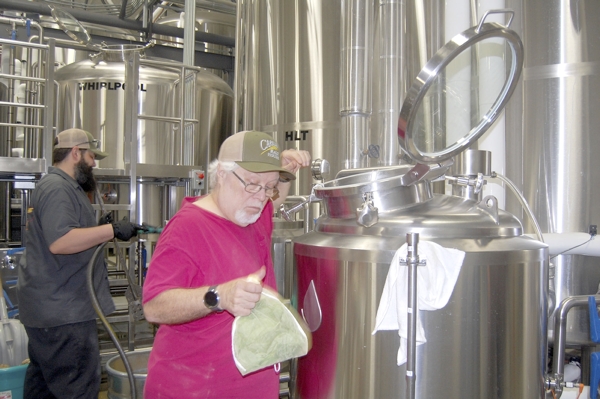 It was a hot and steamy morning at New Sarum Brewery Saturday.

Rich aromas of cooking malts wafted around the huge steel tanks, Steam rose to the ceiling from a smaller tank, holding the newest and very much limited edition of a new beer.

It’s a honey basil amber ale, yet to have an official name, and it’s going to be featured at New Sarum’s 1 Year AnniBEERsary Bash on April 29.

Homebrewer Rick Godby, won the contest sponsored by the Salisbury Homebrewers Club, his one entry was picked by 10 judges out of 18 submitted beers.

Andy Maben, the brewmaster and co-owner of New Sarum told the homebrewers that everything they tried tasted good. Judges ended up picking their top five beers, with Godby’s at No. 1.

You could say excitement was bubbling on Saturday as the brew came together. Brewing beer is an art and a science, and you could see both in action. On a table were three bags of basil leaves, a big bucket of honey, a cup of hops and a cup of Irish moss, which is a nice way to say, some seaweed, smelling of the ocean.

Ingredients had to be added at specific times, and quickly. When Maben said, “Go!” Godby tossed in the Irish moss. That had to cook for a bit, then the 3 pounds of honey went in and it was time for 1 1/2 pounds of basil. The leaves were in mesh pouches, so they wouldn’t gum up the works when the beer is pumped into the next tank.

As the engredients blended, the aroma became distinct — not just warm malt and hops, but the floral honey and the herby basil, too.

Godby was happy and excited.

He’s been brewing at home for three years, after a try about 20 years ago.

“I’m still amazed that I won. We have some really good home brewers.”

Along for the brew was Aaron Goss, who, with Steve Bauk, owns Carolina Malt House, which provided the malt for the winning beer.

Although the business is not fully operational, they can malt using an artisan method, and wanted to be part of this special brew.

Bauk had come to the homebrewers meeting where the winner was announced to talk about the malt business.

Salisbury’s homebrewers club has been meeting for about six years, exclusively at New Sarum for the last year, says President Don Rankin.

Everyone brings a glass to each meeting for tasting whatever bubbles up.

They decided to choose a charity to benefit from the sales of the winning beer, doing some research and then agreeing on Prevent Child Abuse Rowan.

Matt Freeze told the homebrewers about his organization’s three programs: the Terrie Hess House Child Advocacy Center, which provides services for children who have been abused sexually or physically; the Nurturing Parenting Program for parents of children from birth to five years to learn positive punishment techniques; and Stop-Go-Tell, a school-based prevention program for children in first through fifth grades.

Maben was pleased with the choice. “We talked about a lot of local charities and this is the one that rose to the top,” he said.

The brewing competition was the first of its size, with 18 entries.

Godby had brewed his winning concoction before and decided to try it again. It has a pleasant basil aroma and the flavor is crisp and refreshing, a good beer for any time, but especially on a warm day.

Maben’s goal for the brewing was to use 100 percent Carolina Malt House grain, and as much local honey as he can get his hands on.

“I called the Rowan Beekeepers Association and told them what I was looking for.”

Maben also wants to use local honey, or at least all North Carolina honey, for the Bell Tower Brown he plans to make in the fall. Maben and nine other judges tasted the 18 submitted beers.

“I had a great time tasting them all,” Maben said.

“I wanted those four to give balance,” he said, Maben and Edward Moscardini, another co-owner, have very different tastes in beer.

Each judge wrote a comment about every beer they tasted, and they ended up picking the five top beers, because, Maben said, they were all exceptional.

Tim Kelley came in second with his Mosaic Pale Ale, and won a case of New Sarum beer.

Troy Fink came in fourth, with his Winter Warmer, a beer Maben said had 8 percent alcohol (high for beer) and a burnt amber color. He won two six packs.

Steve Bauk of Carolina Malt House came to the reveal meeting to explain what the company will offer — local barley, malted in a number of styles.

Bauk and partner Goss will not grow the grains, but have contracted with growers to produce 800 acres of grain, mostly barley.

Carolina Malt House can also malt rye, which would be of interest to the distilleries which are popping up around the state.

Bauk estimated that when they are fully up and running, they’ll be able to do 17 tons of malt every five days. And they’ll have the ability to expand.

At New Sarum’s anniversary party, Maben plans to have separate tents for each component of Godbey’s winning beer.

Ester Marsh: How much sleep do teenagers need?

Most people know my son Andrew Burgess is a very talented runner. His successes range from national champ in the... read more