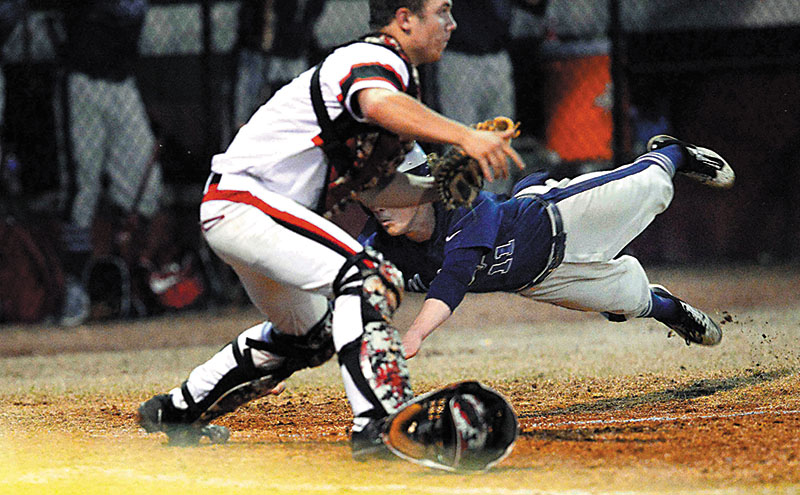 East's Will Brown 11 dives for the plate to score as South's Jarrid Nelson 6 waits for the throw. photo by Wayne Hinshaw, for the Salisbury Post

One week after suffering a 14-inning loss to West Rowan, the Mustangs needed eight last night to scratch out a 5-3 SPC victory at South Rowan.

“It’s crazy, but that’s us,” winning pitcher John Owen said after East’s Corbin Moss delivered a two-out, two-run single in the top of the eighth. “That’s what I love about East Rowan baseball. We’re always trying to grind it out.”

East (7-5, 6-3) won its second straight game and reached the conference season’s midpoint in good shape. South (8-4, 6-3) lost its second in a row, taking some of the shine off its brilliant start. Both teams are part of a five-way tie for second place in the league standings, one game behind pace-setter Carson.

“It was a big win. Our team showed a lot of fight,” said interim ER coach Brett Hatley, who filled in once again for head coach Brian Hightower. “South’s always been a scrappy bunch, but we fought with them. Then we fought back and got it done.”

They got it done behind Owen, the senior right-hander who struck out 12 batters, walked none and yielded two earned runs in 7 1/3 innings. He fanned at least one man in every inning but the seventh. Reliever Colby Myrick procured the last two outs and earned his first save.

“In that last inning they just made some really good plays,” said South coach Thad Chrismon. “The barehanded play was perfect and that last ball was hit on the button. East earned that win. They earned their way to it.”

Owen was a March Madman from the start, retiring South’s first 12 batters and recording his first seven strikeouts. The Mustangs took a 1-0 lead against lefty Dillon Norton in the third inning when Chandler Blackwelder doubled to right-center field, took third base on a flyout and scored when Owen lifted a sacrifice fly to right.

East made it 3-0 an inning later, when Jax Fitz coaxed a leadoff walk and Moss grounded a single into right. Both runners scored on Blackwelder’s two-run double to deep center field, but an unusual interference call prevented him from making it a stand-up triple. Fitz, who scored first on the play, inadvertently stepped on a live ball while trying to remove Blackwelder’s bat from the home plate area.

“The pitch was a 2-2 breaking ball, after (Norton) had already thrown me three breaking balls in the dirt,” Blackwelder said after boosting his average to .405. “I was just waiting for another one and he left it up a little.”

“(Owen) threw me an outside fastball,” Harrington said. “And I knew I had to go backside. I had to make them make a play, and somehow it dropped in.”

It took a two-out hit by South’s Austin Chrismon to tie the score in the bottom of the sixth. Joyce led off with a slow roller that Owen misplayed into a two-base error.

“Don’t know why I tried to barehand that ball,” he said after rifling a low throw past Moss, East’s first baseman. “I should have gloved it and thrown him out, but I kind of rushed it.”

Both teams threatened to score in the seventh inning. Facing South reliever Matthew Donahue, the Mustangs put runners on the corners before an inning-ending groundout doused the rally. South’s Chandler Norton singled and stole second with two away before Dawson Larimore flied out.

East broke through against Donahue in the top of the eighth. Bryson Wagner legged out a one-out infield hit and advanced to second when Fitz was hit by a pitch. Both runners moved into scoring position on a groundout before Moss — a .182 hitter before the game — paddled an opposite-field single into left.

“I was just looking for something to drive hard,” said Moss, who belted a three-run triple in Friday’s win against Central Cabarrus. “I at least wanted to put it in play. Luckily, it got through.”