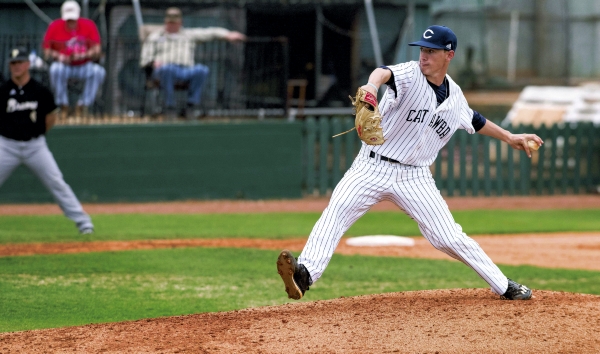 Catawba baseball’s home/road splits have been a little scary — 15-1 in the friendly confines of Newman Park but less than break-even on the road.

But on Tuesday, the Indians won an old-fashioned ballgame, 2-0, on the road against Winston-Salem at BB&T Ballpark. Freshman lefty Bryan Ketchie (5-1), who starred at West Rowan High and for the Rowan County American Legion team, pitched six sharp innings and the teams put nine in the books in 2 hours, 20 minutes.

High-scoring marathons have been the norm this season.

“It was just nice to have a ballgame decided by good pitching and good defense,” Catawba coach Jim Gantt said. “It wasn’t decided by the wind blowing routine fly balls out of the park. The park in Winston is set down in a hole, and wind wasn’t any kind of factor.”

BB&T has normal dimensions, 399 feet to center field, but Ketchie’s job was easier than it is at Newman Park, where the green wall behind him looms 39 feet closer.

“They hit a few balls that probably would’ve been out at Newman Park,” Ketchie said. “Our outfielders made some nice plays.”

Catawba’s offense was hindered by double-play grounders. The only runs came in the top of the third when Luke Setzer opened the inning with a single. After an error and a walk, the Indians (22-9) had the bases loaded, and they managed two runs on a passed ball and Kyle Smith’s sac fly.

“Those two runs took a lot of the pressure off,” Ketchie said. “I was locating my fastball well and mixing in some curves, but by my best pitch, by far, was my change-up. I had a good difference in speed between the fastball and the change-up, and I had the most movement on the change that I’ve had all year. It was really dropping between the knees and the ankles.”

Ketchie had five strikeouts and no walks. Officially, he allowed two hits, although Gantt felt a third-inning single credited to the Rams should’ve been ruled an error.

“Ketchie really had a no-hitter until the sixth when they got a double,” Gantt said. “He was getting a lot of swings and misses with the change-up. They’d started to time him a little bit in the sixth, and we got him out of there after that inning.”

Clay Young got the first out in the seventh. Then Connor Johnson got five outs, three with strikeouts. He was the bridge to closer Bryan Blanton for the ninth. Catawba ended the game with a sharp 6-4-3 double play. Shortstop Jeremy Simpson to second baseman Jacob Nester to first baseman Chance Bowden.

“That play alone was worth people coming to the ballpark to see the game,” Gantt said. “Simpson made a really good pickup going to his right and a good feed, and Nester made a nice turn.”

“They threw some good arms at us,”  Gantt said. “And they’ve got some guys in the infield who can really play.”

NOTES: Gantt said the Indians plan to shift this weekend’s home games against Augusta to Saturday and Sunday, as rain is almost certain on Friday. … Catawba is planning to be part of scrimmage next week with the Kannapolis Intimidators. … Catawba won for the sixth time without hitting a homer. Catawba is 9-1 when it plays errorless baseball.