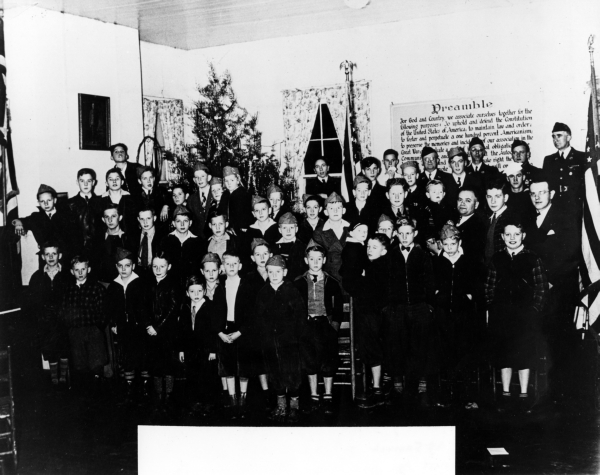 Dr. Norman Ray Sloop provided this photograph showing the Sons of the American Legion gathering for a 1937 Christmas Eve party. The party was held at the old Samuel C. Hart Post No. 14, which was then located on what would become the VA Medical Center property. Sloop, who is the fourth boy from left on the front row, was 8 years old at the time. The youngster next to him, five boys in from the left, is Edward H. Clement, today’s well-known preservationist. The only other boy who can be identified on the front row is Frank Buck, who is the seventh boy from the left. Thanks to the late Don Clement Jr., here are the other boys who can be identified, starting with the second row, left to right: Guy Poplin, unknown,  Reid Goodson, unknown, unknown, John Beard, unknown, Pat Beard, baby, Tommy Lingle (holding baby), three boys who are unknown and Jimmy Burch. Third row: Demont Roseman (under the flag), Harold McPheaters, Charles Parker, unknown, Carl Weaver, Robert Wingate, Haynes (no other name), Richard Russell, Baby Yantzious, Nick Yantzious, Bill Armstrong and George Shaver (with glasses). Fourth row: Unknown (by flag), Bryce Beard Jr., Donald Clement Jr., Vincent Fleming (sailor’s cap). Back row: (On the wall is a picture of Samuel C. Hart), Bill Weaver (at window), Council Weaver, unknown, Charles Shaver (with glasses) and Donald Clement Sr., Bryce Beard and Bob Wingate.