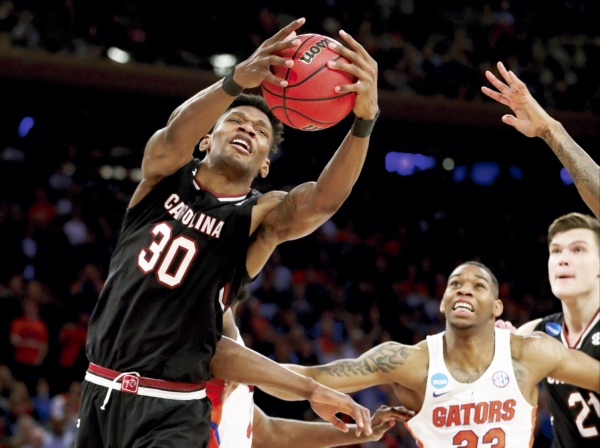 The school of Frank McGuire, Kevin Joyce, Brian Winters, Mike Dunleavy and Alex English is going to the Final Four for the first time.

Add the names Sindarius Thornwell and Frank Martin to the top of the list.

Thornwell’s 26 points and the Gamecocks’ swarming zone defense meant a 77-70 victory over Florida on Sunday and a berth in the Final Four.

Martin, he of the booming voice and terrifying faces, led the seventh-seeded Gamecocks to the biggest victory in school history and now they will face Gonzaga, the No. 1 seed from the West Regional, in the Final Four on Saturday at Glendale, Arizona.

“Anyone that’s in sports dreams of moments like this,” said Martin, who was doused with water and dancing as soon as he entered the locker room. “It’s not something that you start dreaming it the year you win 25 games. You dream it every single day.”

The game was as close as expected until the final minute. There were 14 lead changes and 10 ties. The last lead change came on two free throws by Thornwell with 2:24 left that made it 65-63. Fourth-seeded Florida managed just three field goals over the final 3:55.

Thornwell, the regional MVP, followed the deciding free throws with a nice assist to Maik Kotsar for a 4-point lead. It seemed Thornwell, who scored eight straight points for the Gamecocks, was always where he needed to be including making a steal with 40 seconds left that turned into a 73-68 lead.

“Plays needed to be made down the stretch and I stepped up and made plays,” Thornwell said.

“He’s capable of doing anything on both sides of the basketball. So it doesn’t surprise me,” he said. “His senior leadership just kicked in. He don’t want us to lose. He don’t want our season to end.”

“Thornwell was just being Thornwell,” Florida coach Mike White said of the SEC player of the year as voted by coaches. “He’s one of the best players in the country.”

PJ Dozier added 17 points for the Gamecocks, Chris Silva had 13 and Kotsar 12.

Justin Leon had 18 points for the Gators who managed a 40-33 halftime lead on 7-for-12 shooting from 3-point range. But that was it. Florida was 0 for 14 from beyond the arc in the second half, a lot like the 0-for-17 effort the Gators had in their first meeting with South Carolina this season.

“We still got our open looks, but they just, I guess they just went farther than what they were in the first half,” Leon said.

South Carolina, which forced Florida into 16 turnovers, finished 23 for 31 from the free throw line, including a 9-for-10 effort from Thornwell.

It was the third straight game the Gamecocks were trailing at the half and went on to win.

“We felt like we was doing the right things. We felt like everything was going good for us, it was just the ball wasn’t falling in, and we just needed a couple more stops,” Thornwell said. “So going into halftime we always just buckled in and locked in on what we needed to do to win and took it one possession at a time.”

Florida: This was Florida’s first NCAA Tournament game against a Southeastern Conference opponent. … The Gators entered the game with an all-time 44-24 record against the Gamecocks, including 1-2 under White. … The Gators were trying for their sixth Final Four appearance and that includes the titles in 2006 and 2007.

Among those in attendance at Madison Square Garden were Hall of Famer Rick Barry, whose son Canyon plays for Florida, Paul McCartney and Darius Rucker.

South Carolina will meet Gonzaga in the Final Four on Saturday.