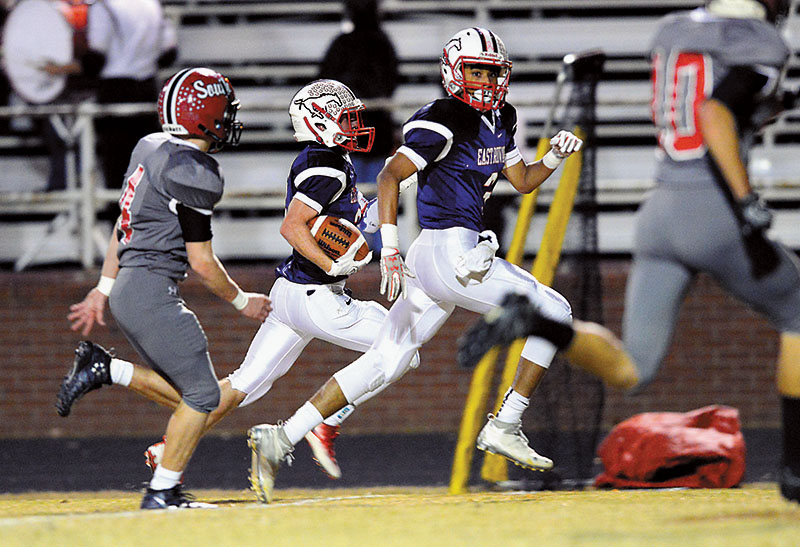 Wayne Hinshaw / Salisbury Post file photo East’s Wesley Porter runs for a touchdown during a game against South Rowan on Nov. 4, 2016. Porter will play football for Sewanee in Tennessee.

Porter hadn’t heard of it either until last fall.

Porter, a feisty defensive back, elusive receiver and exciting kick returner, made first team All-Rowan County three times as well as three All-South Piedmont Conference teams. He’s a heart-and-soul football player, but he’s about 158 pounds and he’s not tall. “Five-foot-8 on a good day,” Porter said. “But 5-foot-6 on a bad one.”

Due to his lack of size, there were never stacks of recruiting mail at the Porter household, but there was a letter one day from Sewanee, also known as The University of the South.

“I remember my dad saying there was some stuff for me from Sewanee,” Porter said. “I was like, ‘I got stuff from where?'”

The letter was from Jimmy Long, who was then Sewanee’s recruiting coordinator. Long was the starting nose guard on the Lenoir-Rhyne squad that played in the 2013 Division II national  championship game, so he knew this area. Long had watched tape, he liked what he saw, and he wanted to come to East Rowan to meet Porter in person.

Porter Googled Sewanee: The University of the South and his eyes widened as a an amazing story unfolded about the little school in central Tennessee, 50 miles west of Chattanooga and about 90 miles south of Nashville.

OK, big-time football was a little different in 1899 when 13 Sewanee Purple Tigers boarded a train for a memorable road trip. They beat Texas, Texas A&M, Tulane, LSU and Ole Miss in a span of six days. They shut out all five opponents. On the seventh day, the legend goes, the Iron Men of Sewanee rested.

The only team to score against Sewanee (12-0) that season was John Heisman’s Auburn club. Sewanee, basically a team of guys not much bigger than Porter, won that one, 11-10.

Sewanee was a charter member of the Southeastern Conference when it was formed in 1932, but by the 1940s, Sewanee had made the decision to de-emphasize athletics and to focus on enhancing its already glowing academic reputation. Since then, Sewanee has kept its football tradition alive, competing  in a series of non-scholarship conferences. Currently Sewanee plays in the Division III Southern Athletic Association.

“I’ve read all the stories,” Porter said. “And now I know all the history. It’s a great history.”

Once he knew where Sewanee was located, Porter realized Long was traveling more than six hours to see him, so he knew Sewanee was serious about recruiting him.

“Coach Long set up a visit to Sewanee and I went out there and took a tour of the campus and watched the homecoming game (on Nov. 3),” Porter said. “I’d seen pictures of the campus and I knew it was supposed to be one of the most beautiful campuses in the country, but I was still blown away. It was just awesome. I told my dad before we left that day that I knew where I was going to school.”

Around the first of the year, Porter made a return visit to Sewanee, met players and coaches, and gave a verbal commitment.

About a week after successfully recruiting Porter and several other North Carolina players, Long resigned, moving on to N.C. State as a graduate assistant.

Sewanee was 0-10 in 2016, and that usually means a new coach is on the way. Veteran Travis Rundle, who spent six seasons at Illinois Wesleyan, was hired on March 9.

“That just means everyone is starting with a clean slate,” Porter said.

Not much bothers Porter, who is fearless and started playing football when he was 4 or 5 years old. He was competing in pads at age 7, against guys two years older, and holding his own.

“Always the smallest, but usually the fastest guy on the field,” Porter said.

And always a playmaker and a creator of turnovers.

As a sophomore cornerback for the Mustangs, Porter intercepted four passes, pounced on three fumbles, blocked two punts and recovered three onside kicks. As a junior, there were four more interceptions, including a pick-six against Central Cabarrus, plus 579 yards on kick returns. As a senior, he accounted for five touchdowns, including a game-deciding pick-six against Northwest Cabarrus. While he was primarily a defensive player, usually employed as a safety as a senior, he accounted for 822 yards as a rusher, receiver and returner.

“He was our most versatile player,” said John Fitz, East’s defensive coordinator during Porter’s career and now the Mustangs’ interim head coach. “He helped us in a lot of different ways and he scored about every way you can score. He’s a great special teams player, and that includes coverage as well as returns. When our kicker got hurt, he even handled the PATs. He’s got some speed and he’s just so elusive with the ball. With a football in his hands, he can be electrifying, and that’s what really got Sewanee’s attention.”

It appears that Porter’s role at Sewanee is going to be a lot like it was at East. Cornerback and special teams, and possibly some duty on offense as a receiver.

Porter is going to a place with the look and feel of the Ivy League. The campus sprawls across 13,000 acres with a chapel that looks like a cathedral and classroom buildings that resemble museums. Sewanee is located on a plateau, 1,000 feet above sea level, and has equally lofty academic standards.

Porter’s goal is to be a football starter and winner at Sewanee, but during his senior year at East his life goals started to make adjustments.

“Every football player starts out with the hope and dream of the NFL,” Porter said. “But you also have to think about life after football is over. I’m going to get a great education at Sewanee.”

There have been upgrades and they’ve put in turf at Benjamin Humphreys McGee Field at Eugene Harris Stadium, but the Sewanee Tigers still play in the same stadium as the national champs of 1899. Built in 1891, it’s the oldest stadium in the South still in use.

Football at Sewanee now is on a small scale compared to the SEC  giants Sewanee used to take on. About 10 percent of Porter’s male classmates also are going to be his teammates on the field.

He’s ready to soak up all the tradition the old school has to offer.

“Wesley will be a good player for them,” Fitz said. “But the biggest thing is the degree. A degree from Sewanee is  like a degree from the Ivy League. It’s going to provide great opportunities for the rest of his life.”