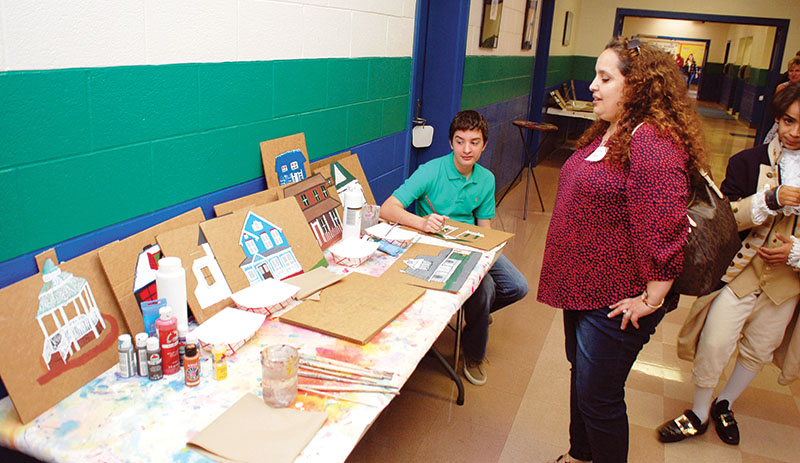 Mark Wineka/Salisbury Post Aicha Khatib, right, a North Rowan Middle School parent, looks over some of the panels Fresh Artist students such as Dalton Connolly, left, painted as part of their 'Silly City' project in Spencer.

SPENCER — So what do North Rowan Middle School art students have to do with a non-profit program in Philadelphia? Quite a lot, actually.

Students, teachers, administrators and volunteers involved in Fresh Artists held a community meeting Sunday afternoon and shared how student art becomes corporate art, then how those funds are used to buy art supplies for underfunded schools.

And that leads, of course to more student art, more giving back. It has been called “lateral philanthropy,” and North Rowan Middle School is all in.

And if things keep going the way they have this school year, North Middle could be a Fresh Artists model for the rest of the country.

“This is a big deal,” said Brown, who first learned about the Philadelphia-based program in her job as a senior program strategist for OFS Brands.

Brown, Lentz, Alexander and Williams traveled at their own expense to Philadelphia last summer and successfully made their case for North Middle’s becoming a pilot program. They left on their second Philadelphia trip today, this time to learn about the Fresh Artists “Cool Jobs” experience.

North Rowan Middle Principal Carl Snider told the good-sized gathering Sunday that Fresh Artists fits in with the community model for K-12 students, providing them with the skills and abilities they need to be well-rounded citizens.

The school learned that 100 percent of its artwork was accepted, and who knows, it could show up later, in much larger sizes, on the walls of corporate headquarters or as a community mural in Spencer.

Fresh Artists founder and president Barbara Allen personally called Alexander to congratulate the school and its work. Good examples of the Silly City approach can be found on the organization’s website.

The individual students sign a licensing agreement with Fresh Artists allowing their work to be sold. The money raised goes toward buying art supplies for under-resourced schools in which 70 to 100 percent of the students qualify for free or reduced-priced lunches — a common indicator of poverty.

Lentz would love to see all Rowan County middle schools participating in a “Silly City” project through Fresh Artists. She thinks it could lead to large panels and murals in Rowan communities, churches and businesses.

“What a building block this could be,” Lentz said. The North Rowan Middle kids, having already taken on Spencer and the N.C. Transportation Museum, next plan a Silly City take on places such as East Spencer and Dukeville.

Also at the community meeting Sunday were a display of $450 worth of art supplies, resulting from the money North Rowan Middle kids raised at the Pablo’s Clothesline Art Sale last year during OctoberTour.

Those art supplies will be distributed to four local elementary and two middle schools, Williams reported.

North Rowan Middle School already has seven Fresh Artists pieces of its own in the halls and cafeteria. The Fresh Artists organization recently donated the three mosaics in the cafeteria as a way of saying thanks to the school.

Allen and her son, Roger, founded Fresh Artists in 2008 as a way to keep art alive in underfunded public schools in Philadelphia, and they hit on the idea of making the children who would be served part of the solution.

Roger Allen discovered that creating large-scale digital reproductions of children’s artwork out of the smaller originals leads to pretty vibrant pieces that corporations, organizations and individuals will pay for. Mark Wineka/Salisbury Post A much bigger reproduction of this fourth-grade piece of art is an example of a Fresh Artist installation at St. John’s Lutheran Church in Salisbury.

So corporate and individual donors make financial gifts to Fresh Artists, then they are given their choice of high-resolution reproductions of student art to grace their headquarters or homes.

The funds donated go toward the delivery of art supplies to public schools that need them.

Artwork from kids in Fresh Artists has appeared in the board rooms of Fortune 100 companies and on the sides of city buses, according to the organization’s website.

“Receiving public validation for their gifts prompts young artists to see themselves as talented, capable and generous, with the ability to effect positive change,” Fresh Artists says.

In effect, Fresh Artists is becoming a curator of K-12 artwork from across the country. Since 2008, the organization judges it has affected the lives of 330,000 young people and delivered $500,000 in goods and programs to classrooms.

For Oriana Reed, an eighth-grader at North Rowan Middle, participating in the Silly City art project gave her a chance to better know a place where she has only lived for three years.

Reed said she understands now where her dad grew up, where her classmates are from, and it also helps her describe to friends who don’t live here what Spencer is like.

“It really made a big difference to me, and I really like it here,” Reed said.

As part of Sunday’s program, North Rowan Middle students wowed the crowd with their interpretive skit on literacy.

The audience also watched a 6-minute video on the Fresh Artists program.

While North Rowan Middle has taken the leadership role in Fresh Artists in Rowan County, Brown said she hopes the program can expand into other schools where new advocates will be needed.