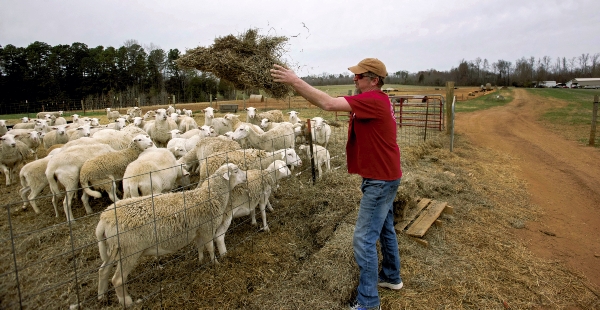 JON C. LAKEY / SALISBURY POST Lee Menius throws a flake of hay into the sheep pen. Menius and his wife Domisty are owners of Wild Turkey Farms in China Grove. The couple have been farmers in the pasture-raised meat market for several years. They are currently in the works of opening a meat market or butcher shop in the town of Davidson. The sheep are kept penned in the spring lambing time to make sure that the pregnant ewes birth in a more protected area. Monday, February 27, 2017, in Salisbury, N.C. JON C. LAKEY / SALISBURY POST Domisty (left) and Lee Menius , owners of Wild Turkey Farms in China Grove, have been farmers in the pasture-raised meat market for several years. The couple is currently in the works of opening a meat market or butcher shop in the town of Davidson. Monday, February 27, 2017, in Salisbury, N.C.

Lee Menius tosses hay into the sheep pen at Wild Turkey Farms. The flock gravitates in that direction, except for the sheep beside the fence. They’d rather stick their heads through the wire fencing to nibble hay piled up on the other side.

The hay is always tastier on the other side of the fence.

And, for Wild Turkey Farms of China Grove, business has become more inviting on the other side of the county line —  in the greater Charlotte region.

About 15 years ago, Lee and Domisty Menius started working his family’s 50-acre farm on Old Cress Roead with an eye toward tapping the local food movement. At first serving farmers markets and clients who came to the farm, they sold beef, poultry, honey and vegetables grown on the farm where Lee grew up.

Through the years, they experimented with different crops and livestock — goats, rabbits, turkey, geese, ducks, assorted vegetables and mushrooms. What didn’t work well was phased out.

Wild Turkey Farms turned its focus away from farmers markets about two years ago. Now Lee trucks goods directly to retailers and restaurants whose chefs insist on fresh, local food. Other than Sweet Meadow in downtown Salisbury, most clients are in the Charlotte area.

Wild Turkey’s biggest change is taking shape off I-77 in the town of Davidson, where Lee and Domisty are preparing to open a butcher shop, Carolina Craft Butchery. It will feature natural and pasture-raised meats from Wild Turkey and other small farms.

The shop will be beside an organic juice bar and across from the Harris Teeter supermarket in Davidson Commons.

The Meniuses believe the demand is there.

Lee says people in the food business are encountering more and more customers who are educated about food sources, cook for themselves or a restaurant and want the highest quality.

The sheep bleat their hellos and complaints. Baa-baa. Baaaaaa.

At the moment, the pen holds about 30 sheep ranging from 10-day-old lambs to ewes ready to give birth. Much of the year they graze out in the field, but Lee doesn’t want to risk losing newborn lambs.

These Katahdin and Dorper sheep grow hair. Lee says the farm started with wool sheep, but he hated shearing.

Domisty pets Pickles and points to Goody, sheep she bottle-fed as lambs when their mothers rejected them. The Meniuses don’t name all their sheep; just the ones they bond with.

Lee and Domisty met when they were both studying animal science at N.C. State. She had grown up in the Wilmington area; he had graduated from South Rowan High School.

Lee says he knew he would go into farming of some kind. When he graduated in 1996, though, returning to the farm that has been in his family since the 1800s was not the plan.

“At that time, small-scale, direct marketing was not on the radar,” he says.

High-volume, industrial farming dominated the food chain. Animals crowded into crates and pens were fattened up with growth hormones and synthetic feed. They died without ever roaming a pasture, eating grass or scratching the ground.

Eastern North Carolina’s struggle with hog farm waste lagoons helped open eyes to the environmental and animal-welfare aspects of these gigantic operations — aspects that aren’t pretty to people on the outside looking in, Lee says.

After college, he taught agriculture at Allegheny High School and began hearing about alternative agriculture. Working on a pasture-raised poultry project helped make him a believer.

Eventually, he went to work for the Center for Environmental Farming and started working the farm part-time. His parents, Alan and Bunny Menius, and grandmother Hazel Menius still live on the farm. He and Domisty and their two boys live down the road.

Now Lee farms full-time, and Domisty works for the Department of Transportation.

The locavore movement has grown exponentially in the last eight to 10 years, he says. Large producers such as Smithfield and Perdue have started touting the same claims as many small farmers, he says, such as antibiotic-free and sustainably raised.

Lee pats one of the 400-pound Berkshire sows in his hog pen. She was just bred for the first time and will litter in May, he says.

The “daddy pig,” as Lee calls him, nuzzles another sow who is lying nearby. She shows no interest.

Other hogs can be seen in a field in the distance. Market-size pigs weigh around 300 pounds, Lee says.

The farm has 150 pigs and is expecting more. When sows are ready to give birth this spring, they’ll be brought into a huge pig barn Lee designed. It provides protection and shade while remaining largely open.

Across the barnyard, laying hens and a rooster are strutting and scratching around in a fenced-in enclosure with a coop at the end. The white rooster crows, and the hens around him twitch their heads in unison.

Lee says the rooster serves as an alarm; he’s more observant when it comes to threats such as hawks, owls, raccoons and foxes. Once a coyote killed 48 of 115 chickens the farm had just bought.

The farm’s large dogs are good protectors, too — Annie, Roo and Juliet. They’re the graveyard shift.

These are Red Sex Link chickens, so named because you can tell the young chickens’ gender by their color — males are white, females are red.

They get non-genetically modified feed and all the bugs they can catch. The 200 hens lay around 165 eggs a day, Lee says.

There are no turkeys at Wild Turkey Farms. The name was inspired by Lee’s old truck, which a friend said sounded like a turkey. The farm raised turkeys for a while. The turkeys are gone and so is the truck, but the Wild Turkey Farms name and its initials stuck — WTF.

So does the desire to promote their style of farming.

“We try to keep everything local as we can and support small farmers doing what we’re doing,” Lee says. “We’re trying to extend the opportunity.”

Spirit: Grapes have brought a new kind of business to Rowan

By Deirdre Parker Smith deirdre.smith@salisburypost.com Wine has become a part of Rowan County’s economy, as it has all over the... read more