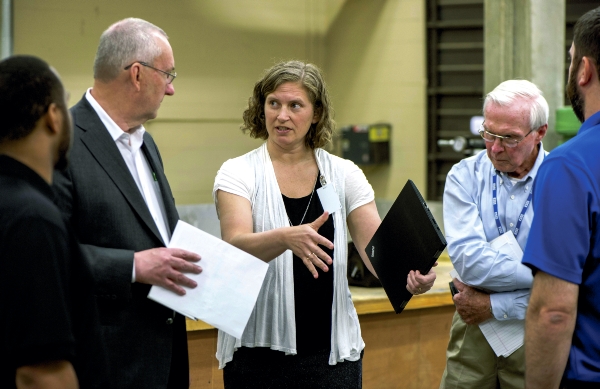 Mandy Mills and Carlton Jackson are two educators who didn’t fall far from the tree. Born in Rowan County, both grew up calling the walls of still-standing schools home. They graduated from the same high school — even ran on the same track team — and when they set their sights on a college degree, both chose to attend Catawba College.

And both found themselves working with the same schools they attended.

“I always said I was leaving but I never did,” Mills said.

Mills, 38, graduated from Salisbury High School in 1996. Before that, she attended Knox Middle School and Isenberg Elementary.

Now, she serves as the school system’s director of career and technical education, but she wasn’t always interested in school. Mills said that in high school she was always getting into trouble, and the assistant principal had her mother on speed dial.

After graduating high school, Mills worked as a restaurant manager for Waffle House and Ihop in town. But soon, she began to desire a change, and signed up for night classes at Catawba

Mills’s story is echoed by Jackson, who attended the same middle and high schools, and also didn’t seek a career in education — it found him.

Jackson went to Catawba to study sociology after graduating from Salisbury High in 1994. But he married young, and had a baby, so after earning his degree he got a job as a credit manager at a local Rent-A-Center.

It didn’t take long for the daily grind of the job to wear him down.

After seeking advice from a local professor, Jackson applied for a job in the school system. He’d worked with handicapped adults while at Catawba, so he put in for a job teaching math and a Salisbury High EC class as a lateral entry teacher. Jackson took to teaching like a fish to water, and said it was the first time he’d tried something that felt so natural.

But teaching at his old school was a strange experience. Jackson’s former high school principal, Dr. Windsor Eagle, was now his boss; and several of his former teachers were now his co-workers. But in a way, it was like coming home.

“’Whether you know it or not, we’re family,’” he said Eagle told him when he started.

And walking through campus, Jackson found he sometimes still thought of himself as a student.

“There were times where I was walking down the hall and the bell would ring and I would think, ‘Oh, I’m late for class,’” he recalls, laughing.

But he thought that perspective made him a better teacher.

Jackson said he always tried to teach students good morals, to teach them about life and to help them socially and emotionally when he could. He wanted, he said, to instill hope in every child he came across.

“On any given day, any kids going to give up,” he said, “and I didn’t want to be that factor.”

During his last year at Salisbury High, Jackson was named the school’s Teacher of the Year.

Mills’s life took a slightly different turn. After graduating from Catawba she took a job working as a computer support specialist at North Rowan High School. There, she realized her calling.

“Once I got in the school environment I realized I needed to teach,” she said.

Mills worked to get her teaching license, and taught technology for five years at North Rowan High. But she wanted to have a bigger impact — and eventually moved into the district’s career and technical education department.

The job requires a lot of partnership with local business leaders, a role that suits Mills well, as she’s familiar with the city’s history and local dynamics.

“I feel like it’s all advantages,” she said, of being local.

Now, she works with all of the county high schools, managing programs that will lead students to direct employment or career certifications — hopefully with local businesses and companies.

“We want our students to stay here,” she said.

And it allows her to visit her old high school, walking the halls and dreaming of the classes and opportunities she could help bring to students who are, like she once was, trying to find their way in the world.

Jackson also chose to move up, hoping he could inspire adults, as well as children. Now he works as a compliance specialist in the district’s EC department, providing supports to teachers, principals, parents and students with disabilities.

He said he still runs into people he knows — old teachers, classmates and students.

“’Why do you never leave? How are you still here?’” he said they ask him.

Jackson smiles and said it’s taken him 40 years, but he’s finally learning how “rich” Salisbury is, now that he’s older. He loves the art, the opportunities, the colleges and the way the city has grown over the years.

“You’d be surprised by how beautiful your community is,” he tells them.

And now, he and Mills have woven themselves into that tapestry, inspiring the next generation of teachers, artists and dreamers.

By Deirdre Parker Smith deirdre.smith@salisburypost.com Rowan County’s craft beer industry seems as if it sprouted overnight. But it has a... read more