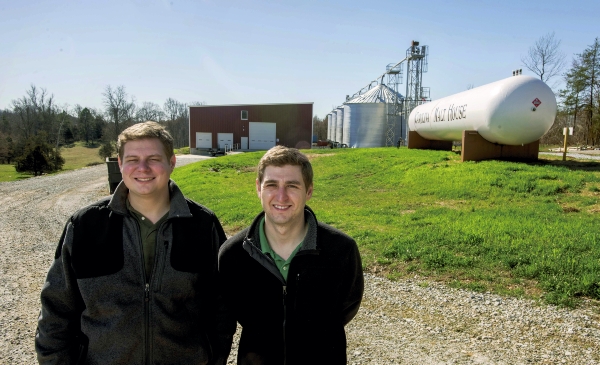 JON C. LAKEY / SALISBURY POST Aaron Goss (left) and Steve Bauk's new malting facility is an exciting new addition to the Rowan County landscape and nearly operational. There are several uses for malt but craft breweries will be a large part of the malt consumers. Friday, February 17, 2017, in Cleveland, N.C.

But it has a full head of foam now, with two craft breweries in downtown Salisbury and Carolina Malt House, a start-up that will provide malted grain locally and to craft beer makers throughout the state.

New Sarum Brewing renovated what was an old tractor dealership on Lee Street, behind the Gateway Building.

Going from a dirt floor and bare brick walls, members of the Moscardini family and brewmaster Andy Maben envisioned a state-of-the-art, large capacity brewing system and a tap room, complete with plans to self-distribute their products.

Maben had been making beer in an office space next to Salty Caper, and the small system meant they were constantly brewing. Demand and a business plan grew.

The Moscardinis own Salty Caper here and in Concord and La Cava restaurant. Maben’s skills fit their idea of making a product that would appeal to more than diners in their restaurants and the audience at Lee Street theatre, where it was also served.

Edward Moscardini, the chief operating officer, joined his brother Gian and father Gianni to plan the best way to make their idea successful and profitable. Edward had been watching the craft brew industry taking a bite out of the macro-breweries, the name brand beers that dominate the supermarket shelves.

When the Moscardinis and Maben saw that growing market, they decided to move forward.

At about the same time, Tommy Baudoin, who had added craft brews to his local wine at Morgan Ridge Brewhouse and Vineyard, was looking to expand, with an eye on craft brews and a restaurant.

Leasing a building on Railwalk in downtown Salisbury from the Ketners, he, too, started with a dirt floor and bare bricks. Again, he determined to get the best equipment and expand on what was a tiny brewing operation at the vineyard.

When Morgan Ridge, in Gold Hill, developed a wedding venue at the vineyard, Baudoin found that the male guests would rather have beer than wine. He added craft brews to the menu and demand increased. He, too, was constantly brewing to meet demand.

He and wife Amie consider themselves part of the hospitality industry and wanted a way to bring more people together for a good time.

With 16 taps and brewmaster Nikki Koontz, Morgan Ridge Railwalk Brewery & Eatery opened to a steady stream of customers, as well as a place for special events.

On trend with the growing interest in beer, Aaron Goss and Steve Bauk conceived Carolina Malt House, a facility on the western edge of Rowan County where barley can be malted — processed for use in making beer — and customized to the brewer’s desires.

Bauk and Goss had other interests, but Goss liked to make beer; Bauk had been working in soft drinks. They first planned to make beer, but with all the breweries popping up, they rethought the plan.

“Aaron had malted his own barley to brew,” Bauk said. Rowan and its five surrounding counties are part of the state’s grain belt, with barley, wheat and rye growing.

“What we’re doing now,” Bauk says, “is one step in the supply chain. We can support every brewery in the state this way.”

He believes that as breweries become more competitive, they’ll need more and different malts to make their beer distinctive.

Bauk said much of the beer brewed in the state now uses malt imported from the midwest, Canada and Europe. “It’s a very bulky item to ship,” he says. And you can’t make beer without it. “It provides the fermentable sugar” that makes the alcohol. Malting, Bauk explains, exposes the energy in the grain.

Having a malt house that can customize and can save on transport costs should appeal to beer makers in North Carolina and to people who want to buy local. A beer brewed in North Carolina with grains from Canada is not local, Bauk says.

And the farther that malt has to travel, the more expensive it becomes. “Breweries would love to have all North Carolina grain in their beer,” Bauk says, but their supply is limited.

That’s the niche Carolna Malt House wants to fill. Bauk ticks off the advantages of their location: “We’re dead center in the middle of the state, the big cities are all within a short distance” and another malt house in Asheville, uses a 100-year-old system for processing. It’s artisanal, but not fast and not consistent, Bauk says.

Carolina Malt House will be larger, able to produce a 22-ton batch.

Their system is not complete, Bauk says, because they are taking their time and using the best equipment they can find.