Spirit: Cheerwine: Born in Salisbury, raised in a glass 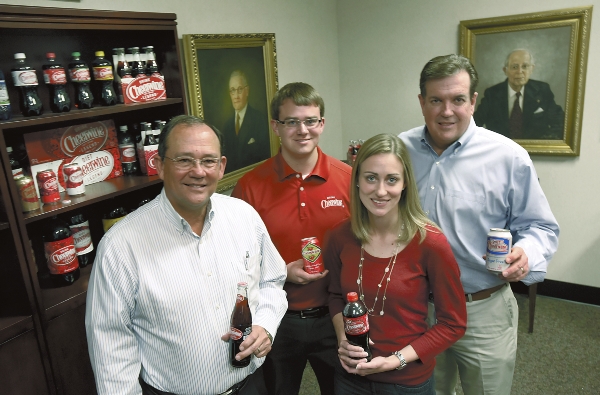 The family members who run Cheerwine are Cliff Ritchie, his daughter, Joy Harper, (In back), son Carol Ritchie, and Mac McQueen. They are standing in their conference room in front of a cabinet of their drink products and portraits of their founders on the back wall. photo by Wayne Hinshaw, for the Salisbury Post

In 2017, Cheerwine soft drink is celebrating its 100th anniversary. It’s a safe bet, however, that you won’t find Cliff Ritchie kicked back at his desk drinking a bottle of Cheerwine.

“We’ll see if we can do it again,” says Ritchie, president and CEO of Carolina Beverage Corp. and Cheerwine Bottling Co., who is guiding his family’s fifth generation in the business.

Ritchie and his wife, Amy, have three children. Their daughter, Joy Richie Harper, has been with the company for seven years and is now its director of marketing. Son Carl is a district manager, and their youngest son, Ben, is a student at UNCC.

If you look around Salisbury — and indeed, the country — you’ll see few companies that have made it to the 100-year mark, still fewer that are still family owned.

“I think we’re off the charts as far as the fifth generation,” Ritchie says. “I’ve heard that less than 2 percent of companies make it past the third generation.”

Ritchie’s great-grandfather, L.D. Peeler, started the company in 1917. His grandfather, Clifford Peeler, led the company thought the Depression and World War II. Ritchie’s father, Raymond Ritchie, spent his entire career there after serving in the Army.

“My great-grandfather would be pleased to see it’s lasted this long,” Ritchie says. “I don’t have any idea what his expectations were, but we do have a great sense of accomplishment and pride. We’ve been able to carry it on, and pass it on to the next generation.”

“It’s exciting to be part of a family business,” Harper notes. Her father is entering his 40th year of service, but many of the company’s 450 employees have 10, 20, and yes, even 40 years of service.

“People have made their careers here,” she says.

“We’ve always had lots of long-term, lifetime employees,” Ritchie says, “and we owe a lot of our success to them.”

Those employees are spread over eight distribution centers — one of which is in Salisbury — in North Carolina and South Carolina. Beyond that, the company franchises its bottling operations, Ritchie says.

Cheerwine’s expansion started occurring in the 1970s, when Ritchie and his brother, Mark, began working for the company. Mark Ritchie has since retired.

“My grandfather was happy to be a Piedmont Cheerwine distributor,” Cliff Ritchie explains, “but we had a desire to go beyond where we were comfortable. My grandfather ran the company through the Depression and World War II, and he became very conservative to survive through all that. We wanted to see where we could go, with his blessing. We always felt like the brand had a lot of potential to grow. We were young and we brought new energy.”

And grow it did. Cheerwine is now available in nearly all 50 states, and through specialty stores like World Market and Cracker Barrel. Each day, new customers discover Cheerwine.

“All ages, of course, drink Cheerwine,” Harper says, “but the Millennial demographic is our core market. That’s who we talk to on social media, and they want to have a conversation with us. Our fans enjoy talking to us. There’s a sense of pride in the brand.”

Harper doesn’t remember when she drank her first Cheerwine. It’s always been a part of her life, but she didn’t think about working for her family business until she went to college at the University of North Carolina at Chapel Hill.

“When I first came to work here, I wanted to show that I’m just like anyone else. I’m here to do the work. I started from the bottom. I didn’t feel any sense of entitlement.”

Neither did her father.

Ritchie worked at the company during the summers. “I did a lot of jobs nobody else would do. I did all types of things, and I didn’t think I’d want a career here. But like Joy said, you grow up, go to college and get a business degree, and you think about it differently and come back to it. It’s a great opportunity, there’s no question.”

In fact, Ritchie went to work for another soft drink company following graduation from Lenoir-Rhyne College, and gained experience that way.

“Then my grandfather offered me a job,” he says. “It was a point where they needed me, and ask me to come into the business and be manager of the Greensboro distribution center.”

Now, two of his three children have joined the family business.

“The reason it’s so rare is that you have to have the next generation that’s interested, and on top of that, they have to be capable,” Ritchie says. “That’s been our blessing.”

Cheerwine will host a 100th anniversary celebration on Saturday, May 20, in Downtown Salisbury, complete with live music, a barbecue competition, children’s activities, and, of course, free Cheerwine.