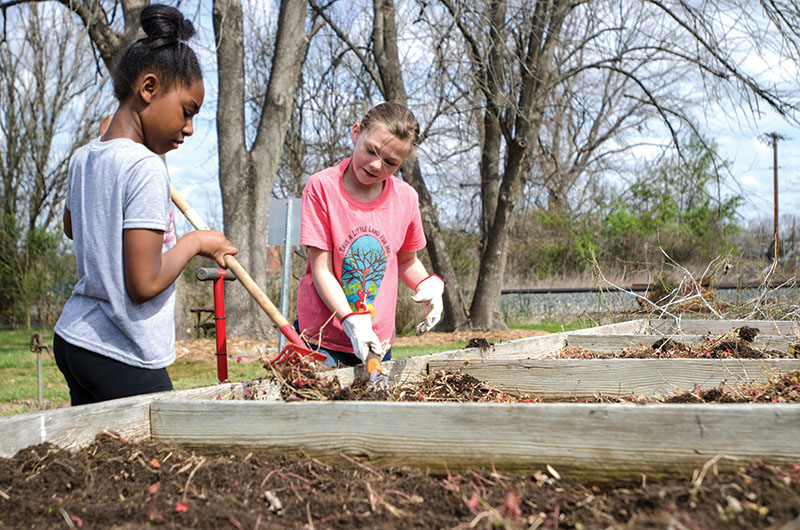 SALISBURY — As her long-handled hoe churned up the ground in a raised bed, Latoya Litaker stopped, bent down and pulled out a treasure.

“I can’t believe I’m digging up carrots from last year,” she said.

Litaker was part of the season’s first work day Saturday at the West End Community Garden on Brenner Avenue. There’s new hope for the garden this year, thanks to Happy Roots Inc., a newly established nonprofit, taking the garden on as one of its first projects.

The women behind Happy Roots — Stacey Carter and Ashley Honbarrier — know how to get things done. In years past, they joined with the LandTrust for Central North Carolina in organizing and promoting the popular Earth Day Jams, which they promise will be coming back next year.

With Happy Roots Inc., Carter describes their mission as “providing nature-based therapeutic and educational services to enhance the wellness of the community and the environment.”

More simply put for now, Carter and Honbarrier want to involve kids in the Salisbury Parks and Recreation Department’s after-school program to plant and tend the garden.

The kids’ involvement could start as soon as this coming Friday afternoon. The city’s summer camp programs also will take care of the garden and reap some of its rewards.

The garden will provide a great hands-on laboratory for discussing nutrition and food, and Happy Roots hopes the West End residents and possibly some of the patients/staff at the nearby Hefner VA Medical Center also will want to become involved in the garden.

Happy Roots also expects to be promoting programs in equine therapy (Carter’s specialty), possibly another community garden near the Civic Center, self-defense the natural way and the Earth Day Jam. The organization has a Facebook page and a website is being developed.

On Saturday, the small work crew was weeding out all the raised beds, adding soil and mulch and planting a couple of beds with sugar peas, which will help the kids see some quick results.

Carter envisions the garden as a whole growing tomatoes, corn, melons, pumpkins, sunflowers and squash, among other things.

As people drive by this spring and summer and see things growing again, Carter hopes the community will be excited and the garden “will pick up momentum.” The women think they are tapping into a growing national movement.

The Salisbury Parks and Recreation Department has been a big help in providing the mulch, preparing what will be the in-ground garden and mowing the grass.

“I’m excited,” Litaker said. “I know it’s going to be even better than last year.”

Litaker knows all about last year. She was a one-woman force of nature in trying to make the community garden productive in 2016, and she thinks it was almost destiny Happy Roots is now a partner.

Working at the VA as a nurse, Litaker drove by the garden daily and noticed how neglected it had become. “I just said to myself, ‘it’s just going to waste,'” Litaker said.

She posted a message on her Facebook page asking if anyone was interested in helping her with the West End Community Garden. She received a couple of positive responses, then she contacted Steve Brown with the city’s parks maintenance department and asked, “How can we get going on this?”

Brown and his crews helped a lot. Litaker assembled 10 to 12 people on her own. “This place looked like a jungle,” she said, guessing it had been neglected for about three years.

Jason Walser, former executive director of the LandTrust and someone who has been interested in a West End transformation initiative, stopped by one day, commended the group’s work and ended up making a significant donation to the project.

Litaker said her goals were to get the community, especially the kids, involved in growing things and ultimately making baskets full of produce that could be donated in the nearby community.

Her own children, 11-year-old Anaya and 15-year-old Talia, became involved with the garden. “They really enjoy being outdoors,” Laytoya said.

Some things were salvaged from last year’s efforts, such as carrots, cucumbers and peppers, but animals, including deer and rabbits, were the main beneficiaries of the garden otherwise.

The Happy Roots women and Litaker remember the days when most people had their own gardens and relied heavily on those back-yard patches for food they depended on year-round.

Litaker says her grandparents had a garden at their West End home, and she thinks today’s kids need to learn how to grow food and “get back to the natural order of things.”

“This is just a beautiful green space,” Litaker said Saturday. “It needs to be put to use. It’s so important, and it’s such a good cause.”