‘It feels bigger than you’: Author Laila Lalami talks about life as a writer 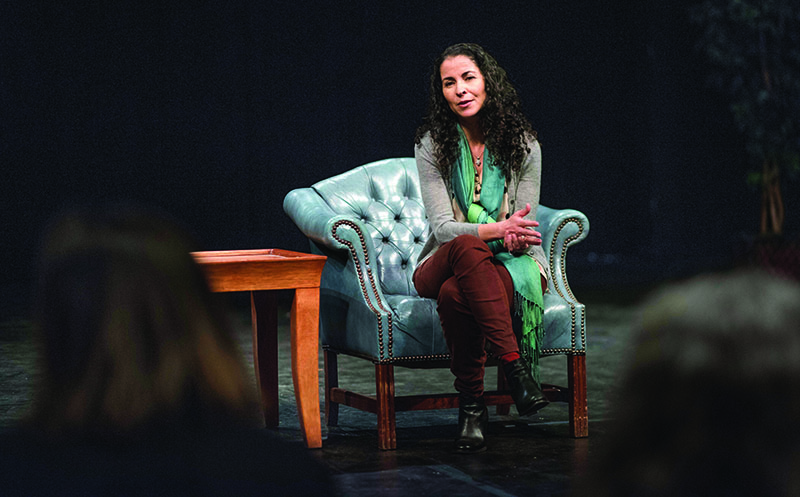 Laila Lalami has much more to offer her fans than her award-winning writing. Those attending this year’s Brady Author Symposium Q&A Session, heard valuable insight into her reading and writing habits – habits that could hold extreme value to the novice writer.

Lalami, at her surface, is an everywoman with whom many can identify. She’s a wife, a mother and a career woman who often struggles with insomnia. Her creator’s mind is revealed in the wee hours. In these moments of restlessness, she processes pieces of her work.

“It’s the book. You’re thinking about it all the time,” she noted as the cause of her wakefulness. “It feels bigger than you and it feels like you’re living inside it all the time.”

And she allows herself these moments, embraces, even, periods of quiet and inward contemplation of her writing work. In the morning, well-rested or otherwise, her structured routine begins.

Lalami begins her day at 7:30 a.m., taking time to answer emails and read the news. An hour later, technology in her workspace goes off the grid.

No emails. No social media. She has software that blocks the internet so she can focus on nothing but the task at hand for the next eight hours.

These hours are not spent behind a desk and at the keyboard alone. Lalami counts reading and doing research for the book as part of being an author. The key, she says, is to think of nothing else but what she is creating.

“You’d be amazed what you can do if your internet is not on,” she said with a laugh.

A second important part of her process, Lalami said, is to hold on to moments of validation, as they are few and far between for even the most established of authors. Lalami’s Pulitzer Prize finalist novel, “The Moor’s Account,” was sent to and rejected by 10 publishers before one final revision turned it into the award-winning, fan-favorite we see today.

The book’s critical acclaim is something she holds onto to motivate her writing.

“Having moments like this where there’s external validation, that’s something that can help you,” she continued, adding in jest, “For a few months you’re like ‘Well, I guess I should stick with this writing thing.’”

In terms of her own journey as a writer, Lalami said that she fell into writing naturally, following an early love affair with the written word.

“I started out writing because I was a reader,” she said. “Out of a love of books grew this love of telling stories.”

She said that the talent of the authors she reads has always felt bigger than her own. This, she said, is the driving factor behind her own dedication to her work – though it can be an additional source of frustration.

“The hard part is to keep going, because you know that the more you do it, the better you get at it,” Lalami said. “Books are written one word at a time, one paragraph at a time, one page at a time. There’s no other way to write them.”

Finally, as a writer of difficult and controversial subject matter, Lalami talked about letting her work follow its own path. Stories that portray violence or darkness are allowed for authenticity. Lalami knew this choice was a risk in “The Moor’s Account,” but said it was worth taking.