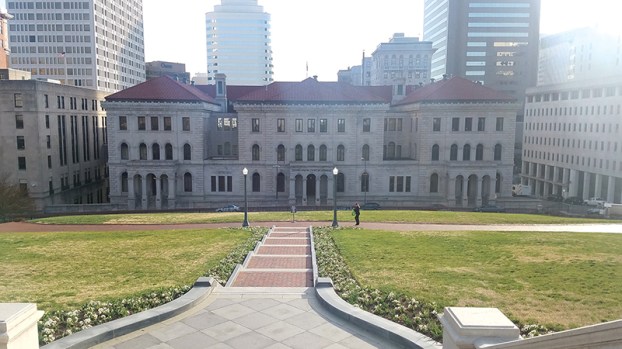 Drafting the language to describe the decision may not be a simple task, Marshall said in an interview with the Salisbury Post.

“I think it’s going to be harder to fashion an opinion that can attract a majority of judges than it might be in other cases,” Mashall said.

As the lawsuit works its way through court, commissioners have asked Rowan County Sheriff’s Office Chaplain Michael Taylor, or his son in some cases, to offer opening invocations at meetings.

In 2015, Judge James Beaty, who serves in North Carolina’s Middle District court, ruled previous prayer practices unconstitutional. By a 2-1 count, a three-judge panel for the 4th Circuit reversed that ruling in 2016.

Now, Rowan County’s suit has joined a minuscule portion of cases to be reviewed by all 15 judges for the 4th Circuit, known as an en banc review. The court’s decision about Rowan County’s case will require at least eight of the 15 to agree with one another about the constitutionality of past prayer practices.

As judges decide, the only certainty is that Judge J. Harvie Wilkinson’s dissent in the three-judge panel decision will influence the opinion of other judges, said Marshall and University of Richmond law professor Carl Tobias. Wilkinson’s past experience with such cases and stature as a judge are reasons for others to give credence to his opinion, Tobias said. It may have been the reason the court agreed to an en banc review.

Wilkinson, appointed by former President Ronald Reagan, is a long-serving member of the court. At various junctures, Wilkinson’s name has been mentioned as a potential pick for the U.S. Supreme Court.

“I do think that Judge Wilkinson, the fact that he dissented, led to an en banc review in the first place,” Marshall said.

In his dissent, Wilkinson warned against sectarian prayers becoming the “gateway to citizen participation in the affairs of local government.” During oral arguments last week, he frequently verbalized his opposition to Rowan County’s prayer practices.

“It does make a difference what the panel opinion says,” Tobias said.

However, Marshall and Tobias cautioned against using the party of the president who appointed judges as a determining factor for the final opinion.

“It’s a pretty crude instrument, which is my problem with it,” Tobias said.

Wilkinson, for example, was appointed by a Republican. Chief Judge Roger Gregory is an interesting case. Former President Bill Clinton nominated Gregory to the 4th Circuit Court during a congressional recess, which meant his tenure on the court lasted for a limited time. Gregory was renominated by former President George W. Bush and confirmed to the court.

Gregory excluded, the current composition of the court includes five judges appointed by Republicans and nine appointed by Democrats.

Once the en banc panel issues its ruling, there’s only one appeal left — to the U.S. Supreme Court.

Asked after last week’s oral arguments, neither Rowan County’s attorneys nor the ACLU would say with certainty whether an unfavorable ruling would result in an appeal to the Supreme Court.

Marshall said it’s possible that the Supreme Court would want to wait longer before taking up another case about public prayer. The most recent case was Town of Greece vs. Galloway — in which the court found it constitutional to allow volunteer chaplains to offer prayers at the start of meetings.

Rowan County’s suit is the most significant prayer case since Greece vs Galloway. Legal briefs in Rowan County’s case also borrow heavily from opinions in Greece vs. Galloway.

He said Supreme Court justices could also find it significant that the 4th Circuit Court of Appeals opted to hear the case en banc, which occurs in about 0.3 percent of cases where it’s requested.

The margin of the 4th Circuit decision could also influence whether the U.S. Supreme Court takes the case, Tobias said. If the margin is 8-7, Tobias said the Supreme Court might be more inclined to accept a request than if it’s 11-4.

There’s no deadline for the 4th Circuit to issue its ruling. In fact, there may only be one thing that’s certain about a ruling, Marshall said.

“It’s one of those cases that captures the attention of the public,” he said.