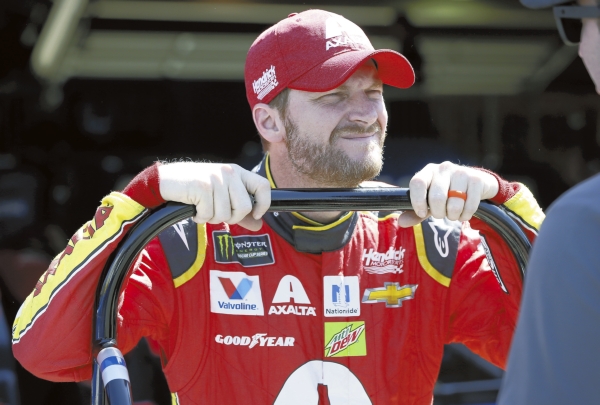 Dale Earnhardt Jr. waits in the garage area prior to the opening practice session for the NASCAR auto race at Auto Club Speedway in Fontana, Calif., Friday, March 24, 2017. Only 24 drivers in NASCAR history have started 600 races, and Dale Earnhardt Jr. joins the club Sunday. After a slow start to his first season back from a concussion, he would love to celebrate the milestone with his first win on the well-aged asphalt at Fontana, where he typically runs quite well. (AP Photo/Alex Gallardo)

He still recalls his conversation with Tony Eury Jr., his cousin and crew chief, as he sat on that starting grid in Charlotte in 1999.

“I remember telling Tony that I would switch with him for a million dollars so he could do this instead of me,” Earnhardt recalled Friday with a chuckle. “Because I was scared to death. … I was overwhelmed with the weight of the situation, and how much attention it was getting, and it made it really hard to soak in and enjoy it, I guess.

“We just wanted to do so well and not fail. It was fun. It was a wild time.”

The son of racing royalty once felt crushed by expectations, yet he persevered and established his own legacy in the sport. Along with being NASCAR’s most popular driver for most of his career, Junior has 26 victories, 252 top-10 finishes and two Daytona 500 trophies in his first 599 races.

“I just wanted to drive,” the 42-year-old Earnhardt recalled. “I wanted to race cars for a living. I wanted to do it well enough to be able to afford to make a living doing it. I didn’t have vision or assume that I was going to make all of the money and success that we have made, but all I really wanted to do was to do it long enough so I didn’t have to get a real job.”

Earnhardt has done it effectively and consistently for 17 straight years. Only 24 drivers in NASCAR history have started 600 races, and Earnhardt would love to celebrate his entry into the club Sunday with his first win on the well-aged asphalt at Fontana, where he has typically run well for most of his storied career.

Earnhardt hasn’t won a race since late 2015, and he has never won at Fontana in 24 starts despite finishing second twice and landed inside the top 12 in six consecutive outings at Auto Club Speedway.

He missed the second half of last season with a concussion, at least the fourth of his racing career. The absence was his longest break from competition since his debut season back in the 20th century, but he has returned with optimism and confidence, if not results: He hasn’t finished higher than 14th in the first four races of this season, leaving him 23rd in the standings.

Yet Earnhardt has evolved into an elder statesman of the garage, and his easygoing personality even allows him to squash most beefs with a smile — and some beer.

After Ryan Blaney cursed him out on the radio last week in Phoenix, Earnhardt played it off by texting with his young rival — and forcing Blaney to furnish the beverages whenever they hang out this spring.

Blaney incurred the wrath of Earnhardt’s legion of fans, particularly on social media, but Junior himself took it good-naturedly. Blaney had ample reason to make good with his neighbor in North Carolina.

“He owns the land that I live on,” Blaney said with a grimace. “So strategically, that may not have been the best thing for me to do that to him last week, but we’re good. He’s a great guy and a good friend of mine.”

While he crosses his latest historic mark, Earnhardt doesn’t appear to be done soon. He confirmed Friday that he intends to begin talks soon with Hendrick Motorsports about a new contract to replace his expiring deal.

“It’s only been a few races, but I feel really good and we have had some discussions about planning to get together,” Earnhardt said. “It’s not something that I put on the shelf, for sure. We’re getting closer and closer.”

Although he realizes some fans, including legendary driver Richard Petty, would have liked to see him retire for his health after that last concussion, Earnhardt is feeling new appreciation for the simpler aspects of this high-profile job.

“You get older, you start to understand how you prioritize the things that are most important to you about the sport,” Earnhardt said. “The camaraderie and the friendships that I’ve made kind of started down the list, and as I’ve gotten older, that has crept up the list. If it’s not No. 1, I don’t know what is.

“That probably is what you will miss the most once you are done driving, is the people.”

FONTANA, Calif. (AP) — Kyle Larson hopes his NASCAR Xfinity race victory will catapult him to a weekend sweep at Fontana.

The way this season is going for the overall Cup series points leader, it’s tough to argue against it.

Larson held off Joey Logano on the final lap to win another Xfinity race dominated by Cup drivers on Saturday.

Larson thrived out of a late restart with smart moves and a clever lane choice on Fontana’s five-wide asphalt. The native Californian won the Xfinity race at Fontana for the second time in his Chip Ganassi Racing Chevrolet.

“It was a lot of fun with Joey there late,” Larson said. “I hope it gives us some good momentum. We’ll start from the pole and hopefully be here again (Sunday).”

Larson earned his sixth career Xfinity victory when he kept Logano behind him off a late restart, winning by just over a car length.

Larson is also on the pole for Sunday’s race. He has finished second in three consecutive Cup races, propelling him into the overall lead without a victory.

Cup regulars Larson, Busch and Logano dominated on a cloudy day at Fontana. Busch led after each of the first two stages, but he brushed the wall in his Joe Gibbs Racing Toyota with 28 laps to go.

Larson overcame a speeding penalty on pit road that sent him to the back of the field midway through the race.

Logano twice rallied back from far behind and led five times for 70 laps.

He got an early speeding penalty on pit road. His car later fell off the jack during a long pit stop, but he passed 20 cars in less than two laps to get right back in it.

Despite the technical glitches, Logano had a blast.

“I vote for two races at Auto Club Speedway, I’ll be the first to say that,” Logano said. “What an awesome race track. It’s so much fun. You can run anywhere you want. The racing is great. There is tire falloff. There are bumps. There’s everything here. It’s the perfect race track. I wish we came here more often, because it’s the best race track we go to.”

Paul Menard’s car caught fire after hitting the wall with about 55 laps to go, slowing the race. About 12 laps later, Cole Custer ended up with a wrecked car for the second straight week when he hit the wall on Turn 1.

Custer blamed his wreck on “a clown move” by Ryan Sieg, who apparently got clipped by Custer on a side draft earlier. Custer and Austin Dillon got into a prolonged scrape last week at Phoenix, with Dillon running Custer into a wall under caution to retaliate.

“Last week it was all my fault, and I’ll take that all on me,” Custer said. “Today it was just a clown. I don’t understand what his reasoning was to pay us back that much, but that’s just a joke.”

Oregon on its way after win over Jayhawks