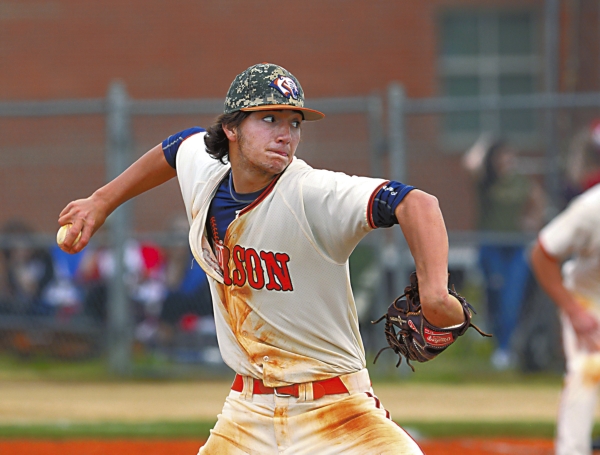 CHINA GROVE — When South Rowan’s Tyler Shepherd grounded out in the sixth inning to drive in a run, South fans roared, and a milestone was reached. It was the first earned run allowed this season by Carson ace Owen White in five starts.

There was some thought that White, a 6-foot-4 junior right-hander, might challenge the 0.00 ERA that lefty Randy Benson put up in 79 innings in the 1968 season for East Rowan, a year in which Benson fired three no-hitters and appeared in Sports Illustrated’s “Faces in the Crowd.”

But Benson’s mark is safe for another year, and White’s ERA climbed all the way to 0.24. Still, Carson won Saturday afternoon’s makeup game in front of a huge crowd, 6-3, and White felt good about that.

“It was a long, hard week,” said White, who hurled three innings on Monday. “I had a good night’s sleep, but I still felt a little sluggish. I tried to power through it.”

Carson concluded a 4-0 week that included two one-run victories. Now the Cougars (8-2, 7-1) stand alone atop the South Piedmont Conference standings. South (8-3, 6-2) resides in second place. A cluster of teams, including East Rowan and defending champ West Rowan, are in the race at 5-3. Everyone in the 10-team league still has 10 games left.

“Owen wasn’t sharp, but he was good enough, and I was pleased with our energy after a very tough game on Friday,” Carson coach Chris Cauble said. “Our energy for the first five innings was great.”

There are going to be times when Cauble can send White to the mound and go take a nap. Saturday wasn’t one of those times. White struck out 10, but the Raiders battled on every at-bat.

“South does a good job on the 0-and-2 and 1-and-2 counts,” White said. “They get up in the box, they choke up, they’re determined to put the ball in play. I knew I wasn’t going to strike out a ton of guys today, but we’ve got  a lot of speed and skill on defense. They had my back.”

Center fielder Brycer Holshouser had White’s back in the fourth, making a tumbling, game-changing catch in left-center. Austin Chrismon had just shocked everyone by smacking a White delivery to the wall in right for a double, and Shepherd followed by whipping a liner toward the gap. The ball was hooking away from Holshouser, but he had the wheels to run it down, and he held on as he crash-landed.

South starter Walker Joyce, who fired a no-hitter with 16 strikeouts on Monday,  had a his wipeout curveball working and struck out eight Cougars in five innings.

“Walker did well,” Austin Chrismon said. “We just didn’t help him out as much as we needed to defensively. We’ve got some things we can clean up.”

South lost the game mostly because it didn’t execute on two pickoff plays. Twice, Joyce caught White leaning toward second, preparing to steal, and both times he had him hung out to dry. But White avoided a rundown long enough in the first inning for Logan Ridenhour to dash home from third base with the game’s first run. Then White was able to scramble back to first safely after he was picked off in the third.

“We had chances to get out of both innings and that turned out to be Carson’s two big innings,” South coach Thad Chrismon said.

Carson’s two loudest hits were doubles by Luke Barringer, a tall sophomore. Barringer’s two-run rip to left-center in the third pushed a 2-1 Carson lead to 4-1.

“I’d never faced Walker Joyce, but everyone was talking about how good his curveball was and they told me to look for a fastball to hit,” Barringer said. “Both the doubles I got were on fastballs.”

Carson picked up two runs on infield dribblers, with Ben Shoaf getting a run home in the first and Cameron Prugh plating one in the third.

Clayton Gilmore socked a solid single in the fourth for Carson’s sixth and final run.

White struck out five in the first two innings, but South was making more contact by the third. Dillon Norton reached  on an error to start the South third, and Dawson Larrimore’s single put runners at first and third. Austin Hyde laid down a nice bunt, and the Raiders were on the board.

After a one-out single by Joyce in the sixth, Austin Chrismon creamed his second double, this one to left-center, to put runners at second and third.

“It was the first time I’ve faced White,” Chrismon said. “I had some clean swings at fastballs on both of the doubles. He supplies all the power you need. You’ve just got to make contact.”

Matt Donahue pitched the bottom of the sixth for South and struck out the side.

Devin Gay pitched the seventh for Carson. A double by Jarrid Nelson, Larrimore’s groundout and a run-scoring single by Hyde made it 6-3, but Gay calmly got the final out on a routine groundball.

“We battled all day, took some good swings,” Coach Chrismon said. “We made them work for it. We got better this week.”

It was a long week for both teams, but this is the SPC. That means they’ll be right back on the field Monday, as another three-game grind begins.

South will host East Rowan.  Carson, with a team ERA of 1.06, travels to Cox Mill.

“We like where we are right now,” Cauble said. “We know our best baseball is still ahead of us.”