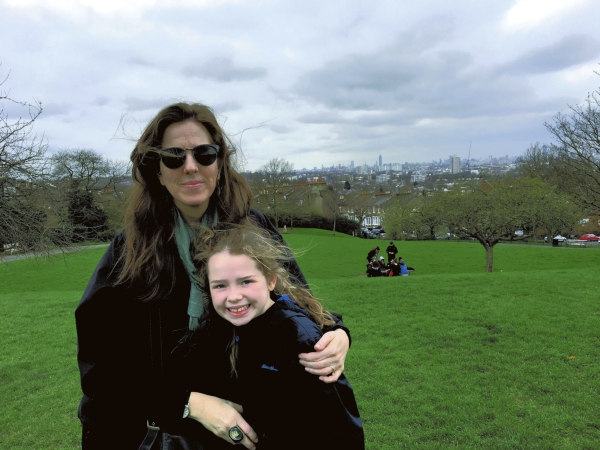 Submitted photo Anne Hoffman and her daughter, August, on Telegraph Hill in London.

First off, the Hoffmans are safe.

Salisbury’s Marc and Anne Hoffman and their daughter, August, have been visiting London this week. They were a couple of miles away at the Natural History Museum when Wednesday’s terrorist attack occurred on the Westminster Bridge and inside the gates of Parliament.

The Hoffman family had walked over the bridge several times during their visit, but not on Wednesday. They report that a strong police presence, along with many helicopters and numerous speeding emergency vehicles, were immediately evident after the attack.

“We are now seeing police officers in pairs everywhere we go,” Marc Hoffman said in an email to the Post on Thursday night. “I have been visiting London for years and have seen this heightened security in the past.”

Three pedestrians died on Westminster Bridge when a man purposely drove his car into a sea of people, many of them tourists. Later, the same knife-wielding assailant stabbed an unarmed police officer to death inside the Parliament gates before killed himself.

In all, three civilians, the police officer and the attacker died. In addition, three officers were among the 40 injured on the bridge. Parliament was locked down for several hours after the attack, along with the adjoining Westminster subway station.

The Westminster Bridge links Parliament to the south bank of the River Thames.

“As you know, the English are resilient and not to be intimidated,” Marc Hoffman said Thursday. “It’s amazing to see how quickly the streets return to normal, with the exception of the cordoned-off areas and increased police presence.”

Hoffman, an accomplished jazz musician and founder and artistic director of the Salisbury School of Music, said he first heard of Wednesday’s attack in a text from his brother, Sandy.

“After following the story on the BBC website,” Marc said, “we knew our travel plans for the day would have to be altered. We were able to take the tube (subway) as planned, but we changed lines and stations as Victorian Station was inaccessible.

“Needless to say, we have avoided that area today (Thursday).”

On Friday afternoon, however, the Hoffmans planned to be within a block of the attack site when they attended a concert at St. Martin-in-the-Fields. In a later email, Hoffman said they also were able to return to the bridge and Parliament area Friday evening.

Over the years, in prior visits to London, Hoffman has witnessed heightened security after the Iranian embassy was seized. He also was in London when there was an Irish Republican Army bombing outside Harrods department store, “where a friend of mine was working and was injured,” Hoffman added.

He also recalls a time when tensions were high between the United Kingdom and France and travel between the nations was difficult.

“This time,” Hoffman said, “it seems the response is more extreme, and that is comforting.”

The Hoffmans have close connections to London.

Marc has a good friend, Andrew Ball, who is a professor of keyboard at the Royal College of Music. The two men have visited back and forth for many years. Ball was in Salisbury about two-and-a-half years ago, “so it was our turn,” Hoffman said.

Marc began visiting London when he was 18 and has been to the city many times. He studied for a term at Darlington College in Devon, where he met Ball, who was conducting master classes.

“We became fast friends and soon after he premiered a piano piece of mine at the Wilde Festival in Bracknell,” Marc said. “I have several other musician friends here including mezzo soprano Fiona Kimm.”

Anne Hoffman, a teacher, lived in Dulwich Village in London for three of her grade-school years while her father was attache for the Army at the U.S. Embassy.

“She attended Dulwich Hamlet School, and we were able to visit there today and take a tour,” Marc said. “We wanted our daughter, August, to experience London around the same age as Anne was when living here and are so glad we were able to make that happen this trip.

Marc said the family visited with the owner of a stationery shop in Dulwich who remembered Anne and her family. They also saw the house where Anne had lived and met the current owners, “quite by accident,” Marc said.

Marc and Anne said they have shown August as many museums and historic sites as possible. They have attended a BBC Concert Orchestra performance at Royal Festival Hall, checked out the Tower of London, saw a play in the West End, rode the London Eye, and visited Harrods, the Royal College of Music, the Dulwich Picture Gallery and St. Paul’s Cathedral, where they took communion.

“It’s the best city in the world for us,” Marc said, “and we are so grateful to have experienced it now through the eyes of our 10-year-old.”

By Mark Wineka mark.wineka@salisburypost.com CONCORD — Proceeds from an April 1 “Walk for Childhood Cancer” will benefit Aria Blackburn, a... read more