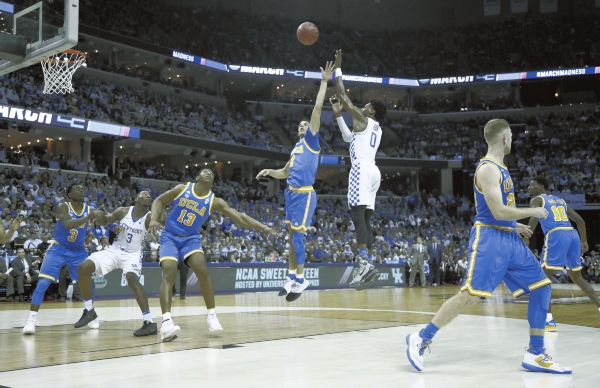 MEMPHIS, Tenn. (AP) — De’Aaron Fox scored a career-high 39 points as the Kentucky Wildcats beat UCLA 86-75 Friday night in a showdown between two of college basketball’s goliaths for a spot in the South Regional final.

The only No. 2 seed to advance to the Elite Eight, the Wildcats (32-5) won their 14th straight game. Now the NCAA’s winningest program will play another of basketball’s titans Sunday in top-seeded North Carolina with a trip to yet another Final Four on the line.

The third-seeded Bruins (31-5) still have the most national titles. Yet they leave their third Sweet 16 under coach Steve Alford short of the Elite Eight.

Fans lustily booed Kentucky coach John Calipari in his first game in Memphis since leaving in April 2009 for the Wildcats. Calipari’s latest crop of talented freshmen put Kentucky into a regional final for the sixth time in seven years.

This was the fourth time these powerhouses have met in the past three seasons, and UCLA upset then-No. 1 Kentucky in Rupp Arena with a 97-92 win on Dec. 3.

Fox didn’t play his best in that game, taking 20 shots to get 20 points. That wasn’t a problem with Kentucky fans making the FedExForum as comfortable as Lexington. Fox scored the first eight points for Kentucky and was all over the court forcing turnovers or diving to the floor to force a jump ball.

He outplayed UCLA freshman Lonzo Ball, who finished with 10 points on 4 of 10 shooting.

Ball handed out eight assists but also had four turnovers.

Freshman TJ Leaf and Isaac Hamilton each had 17 points for UCLA.

Kentucky shut down the nation’s top scoring team, holding UCLA well below its average of 90.2 points a game and just a point off its season-low.

Maybe it was nerves or so many freshmen, but Kentucky led 36-33 at halftime after a first half that wasn’t close to the fast-paced pace expected.

By the second half, the Wildcats at least were running up and down the court.

Monk also started scoring. The Southeastern Conference player of the year had only seven points in the first half. He hit four of his first five shots, including a pair of 3s, within the first five minutes of the second. He scored off the fast break, and his second 3 with 15:52 gave Kentucky a 50-44 lead.

Thomas Welsh hit a short jumper, then Bryce Alford hit a 3 to pull UCLA within 50-49. That was as close as the Bruins would get as Kentucky pushed its lead to as much as 14 in the final couple minutes.

UCLA: Six different Bruins averaged in double figures during the season, and four got there. But Welsh fouled out with 5:58 left. The Bruins turned the ball over 13 times, and Kentucky outscored UCLA 14-2 off the mistakes.

Kentucky: Wildcats won despite not getting much from another freshman, Bam Adebayo. The 6-foot-10 forward had been averaging a double-double during Kentucky’s winning streak, but he finally scored his lone bucket off a dunk with 3:17 left.