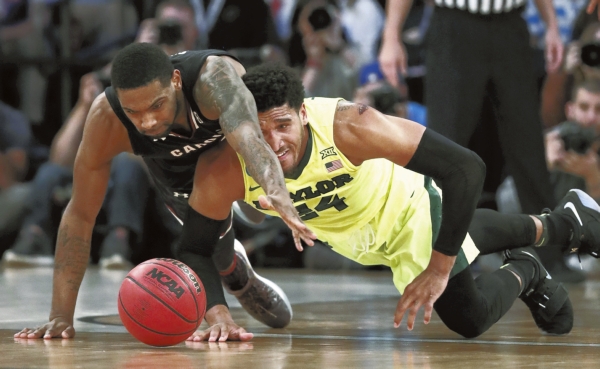 The Gamecocks, who hadn’t won a tournament game since 1973, got their third this year. One more and it’s on to the Final Four.

“It’s a great win for the program,” Gamecocks guard Duane Notice said. “It’s a good feeling when we continue to make history and I think once we get a taste of it, we kind of get addicted and want to continue doing it.”

The Gamecocks (25-10) were in control from the middle of the first half on, mixing defenses and hustling all over the Madison Square Garden court to advance to the Elite Eight for the first time.

“We have been real good defensively all year, we were on point definitely today,” Gamecocks coach Frank Martin said.

South Carolina will meet the winner of the Wisconsin-Florida game on Sunday with that trip to the Final Four at stake.

DJ Dozier and Chris Silva had 12 points each and Notice added 11 for the Gamecocks.

Johnathan Motley had 18 points, 12 in the second half, for Baylor (27-8), which just couldn’t get any offense going. The Bears, who were ranked No. 1 for one week this season, missed 11 of their first 13 shots from the field and it didn’t get a whole lot better the entire game. They finished 17 for 56 from the field (30.4 percent), including 3 for 13 from 3-point range.

“We stayed aggressive and made his catches hard and we knew that he likes to score in the paint and let his catches be extended outside, that way he got to take more than one dribble to score; he can’t just turn and shoot over the top of you,” Thornwell said.

“That’s what they game-planned for. And they did a great job of executing their game plan. We couldn’t, really couldn’t buy a basket.”

Baylor was able to close to 11 points but that was as tight as the game would get.

The Bears shot just 25 percent from the field in the first half (8 of 32) and committed seven turnovers.

“What they do is a great job of making it difficult and then basketball’s such a game of momentum and after you get off to a bad start, sometimes it’s hard to get in a rhythm or hard to get in a flow,” Baylor coach Scott Drew said.

Martin is glad the rest of the country is getting to see the Gamecocks and their intense defense.

“It’s beautiful to us. Which is what matters,” he said. “I’m sure there’s people don’t like it. That’s their prerogative.”

Baylor: The Bears came into the NCAA Tournament having lost four of seven. … This is the Bears’ fourth straight tournament appearance. They were trying for their second Elite Eight appearance. They lost to Duke in the round of eight in 2010. … Baylor was 9-1 against the Southeastern Conference since 2012-13. … Baylor’s previous worst loss in the NCAA Tournament was 69-52 to Wisconsin in the Sweet 16 in 2014. … The 22 points matched Baylor’s low for a half this season.

South Carolina will face Florida in the Elite Eight on Sunday.