David Shribman: The price of power is division 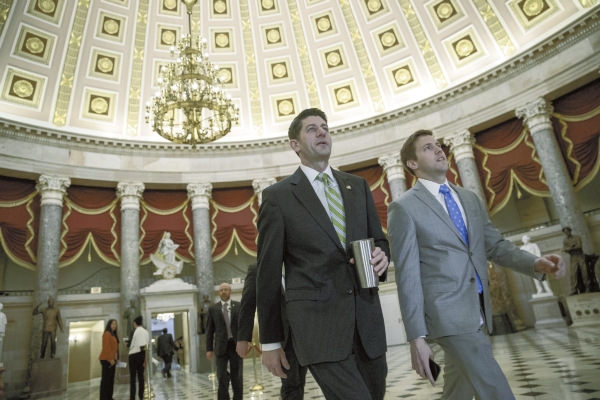 Republicans spent much of last week struggling with one another over details of the measure to overturn and replace Obamacare. House members looked warily across the Capitol to their Senate Republican colleagues, knowing that the handiwork in one chamber will be unacceptable in the other. Members of the House Freedom Caucus argued that the GOP bill doesn’t go far enough. More moderate lawmakers worried it was going too far. Ultimately, the bill was pulled.

Amid all the talk of reserve funds, tax credits, budgetary plus-ups, House rules and Senate rules, one thing was clear: The majority party in Washington is not a unified party.

Part of this is the weakness that always accompanies strength; the larger the party — the bigger its majority — the more likely it is to have schisms and factions. This is a matter of psychology as much as politics, and above all it is a matter of physics.

The Democrats who ruled the House for 40 years through 1995 were riven with divisions, some over foreign policy (the party had hawks and doves on Vietnam), some over civil rights (the party had integrationists and segregationists), some over economics (the party had profligate spenders and stingy budget-cutters). Nature abhors a vacuum, but it also abhors a majority.

In earlier periods, party divisions were of less importance than they are now. The Democrats, for example, were able to pass the Civil Rights Act of 1964 and the Voting Rights Act of 1965 on the strength of Republican crossovers — civil-rights moderates like Everett Dirksen of Illinois in the Senate and Bill McCullough of Ohio in the House — who more than compensated for the opposition of such giants as Sen. Richard B. Russell of Georgia and Rep. Howard W. Smith of Virginia, both devout segregationists.

But today there are few if any crossovers. Not one Republican voted for Obamacare in 2010, and not one Democrat will vote to repeal it in 2017. That is a reflection both of the hardened ideological profiles of the two parties and of the polarization of politics, two factors that mutually reinforce each other even as they make our politics less supple and less civil.

And while compromise has always been a controversial concept — remember how divisive was the Compromise of 1850, transforming Daniel Webster from a visionary into a villain among his own Massachusetts constituents — it is especially devalued now. With lawmakers increasingly coming from districts drawn to reinforce their ideological inclinations rather than to broaden them, there are fewer incentives to find common cause with partisan rivals than there were a generation ago. The gerrymander has become a viper.

For peculiar, perhaps inexplicable reasons, Republicans have been particularly susceptible to partisan divisions.

The divisions that pitted President William Howard Taft against his mentor, former President Theodore Roosevelt, in 1912 were far more injurious to the Republicans than were, for example, the divisions that produced essentially three Democratic Parties in 1948, the Henry Wallace acolytes, the Strom Thurmond Dixiecrat dissenters and the party regulars who supported Harry Truman. Taft finished third in the 1912 election that sent Woodrow Wilson to the White House, while Truman managed to prevail over GOP nominee Gov. Thomas E. Dewey of New York.

But the Republicans have had many schisms that prompted deep anxieties — in 1940, when they nominated a politically untested business executive, Wendell Willkie; in 1952, when the party split between supporters of Sen. Robert A. Taft of Ohio and Gen. Dwight D. Eisenhower; in 1976, when President Gerald R. Ford had to fend off a strong challenge from Gov. Ronald Reagan of California; and in 1992, when President George H.W. Bush was forced to defeat conservative commentator Pat Buchanan. Throughout the end of the 20th century, Republicans faced an identity crisis, struggling with the role of religious conservatives, once a Democratic group, in their party.

Most conventional party leaders abhorred Trump, whose passage from a Democrat supporting abortion rights to a Republican opposing them, horrified them even though a similar passage — of Ronald Reagan from ardent New Dealer to conservative avatar — filled them with pride and pleasure. As a candidate, Trump’s manners and language were an assault on the party’s polished traditions.

The Republicans may have had a plutocratic image, buttressed by nominees like the two Bushes, but in truth it more often embraced candidates from far more modest backgrounds — Willkie and Nixon, for example, or Robert J. Dole of Kansas, all from poor families.

Trump’s glittery lifestyle was a jarring departure. Ronald Reagan’s supporters may have been dripping in diamonds, but no one thought the onetime lifeguard from Dixon, Illinois, grew up with privilege, just with the perspective (shared by Nixon and Dole, especially) that comes with relentless striving and struggle.

So now it is the divisions among the Republicans as much as their shared determination to obliterate Obamacare that define them. Are they the party of conservatives, as their natural progression beginning in the Reagan years suggested? Are they better suited to opposition than to governing? Are they master politicians, or simply master pugilists?

In 1954, amid the McCarthy scare, Adlai Stevenson, who had been the Democratic presidential nominee two years earlier and would be the party’s nominee again two years later, looked at the rival party and described it as “hopelessly, dismally, fatally, torn against itself.” He went on to say that the Republican Party was “divided against itself, half McCarthy and half Eisenhower.” The echo of Lincoln’s 1858 speech at the Illinois state capitol — “A house divided against itself cannot stand. I believe this government cannot endure, permanently, half slave and half free” — was intentional and unmistakable.

Today the divisions endure, and the role of the president in healing or papering over them remains uncertain. “I’m gonna come after you,” Trump vowed on Tuesday as House conservatives asserted their independence and their opposition to the health care bill that House Speaker Paul D. Ryan of Wisconsin had shaped. It is entirely possible is that these conservatives, more than the president, hold the balance of power in the party.