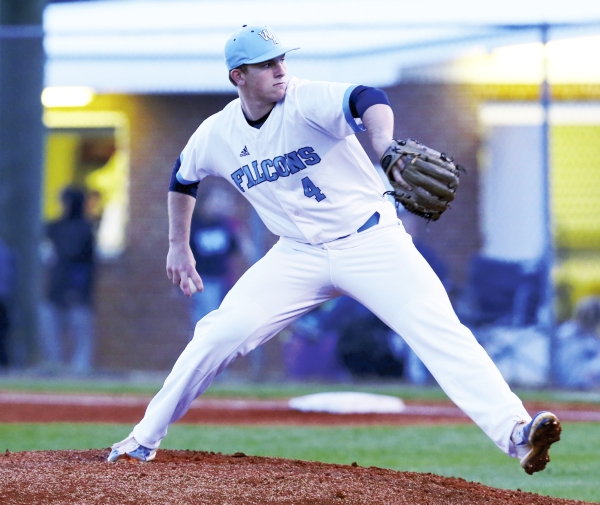 MOUNT ULLA — All of a sudden, West Rowan is a baseball team with the wind at its back.

“We’re finally getting some timely hitting,” coach Seth Graham said after West (7-3, 5-3) collected 12 hits, drew seven walks and stayed busy on the base paths. “That sums up the first part of our season. We lost games because we didn’t get the big hit. Tonight we did.”

The Falcons are tied for third place in your Saturday morning paper, log-jammed with three other schools behind co-leaders South Rowan and Carson. The season will reach its midpoint on Monday.

“You never know in this conference,” Love said after yielding one run on one hit in five innings. “But we’re really playing better. People seem to have more energy in practice and in games.”

Love brought a microscopic 0.62 ERA into the game and was sharp from the start. He fanned seven batters, walked one and induced seven groundouts in a commanding, 66-pitch outing.

“His fastball had a lot of movement,” said Atwood, Love’s catcher for the third season. “And he was able to throw a lot of curve balls late in the count. That’s an advantage when you can do that on any pitch, and tonight he did.”

Cox Mill coach Brandon Taylor tossed Love a compliment after the Chargers (6-3, 5-3) managed only two base runners and were retired in order five times.

“He works down in the (strike) zone very well,” Taylor said. “A lot of guys with his velocity pitch up, but he knows how to pitch down. That’s his comfort zone.”

Atwood and Love called their own pitches, while Atwood provided West’s offensive mojo. One night after going 4-for-4 in 12-0 victory at Concord, the senior battered Cox Mill starter Griffin Gardner for three straight hits. He added a double and a flyout against reliever Justin Fox, finishing an eight-straight-hits sequence when right-fielder Michael Lewis made a diving catch in foul territory.

“He can hit and we need him to hit,” Graham said after Atwood boosted his average to an even .400. “All our guys were pressing early, but it’s a long season. We’re just coming around.”

West scored the only runs it would need to prevail on one third-inning swing. It was delivered by first-baseman Pearce Wilhelm, who steered a 1-2 pitch into center field for a two-run single.

“Pearce is trying to simplify things,” said Graham. “He’s a pretty big guy who can hit for power. But striking out doesn’t help him. Right there, the infield was in and he punched one through the middle. That’s something we worked on in practice (Thursday).”

West cracked the game open with six runs — five of them unearned — in the last of the fourth inning. The Falcons sent 12 batters to the plate against three Cox Mill pitchers and cashed in on two errors, including a dropped fly ball in center field that plated two runs. Atwood had a two-run single, Daniel Durham added an RBI-hit and Love coaxed a bases-loaded walk that made it 9-1. The game’s final run crossed on Brandon Walton’s sixth-inning sac fly.

“We didn’t underestimate them at all,” Taylor said afterward. “The games they’ve lost were all by one run. You always expect a tough fight here, especially against Love. There’s always that two or three runs will win the ballgame. I think West will have a really good second half.”

NOTES: Wilhelm, Dunham and Walton each had two hits for the Falcons. … West has allowed only 14 runs in 10 games. … Kayne Pfeifer had Cox Mill’s only hit, a fourth-inning single to left. He scored on a passed ball. … West relievers Brett Graham and Payne Stolsworth each pitched a perfect inning. … West’s SPC game at Hickory Ridge on Monday has been moved to Northwest Cabarrus High School, due to wind damage at the Bulls’ field.