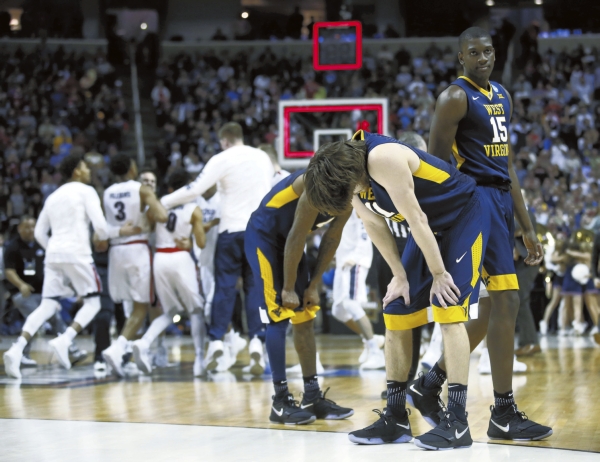 SAN JOSE, Calif. (AP) — Jevon Carter fired up two potential tying 3-pointers only to see them go off-target and Gonzaga didn’t allow West Virginia to get off a third.

A defensive stop was a fitting way for this offensively challenged Sweet 16 matchup to end.

Jordan Mathews hit the go-ahead 3-pointer with under a minute to play and top-seeded Gonzaga survived a rough shooting night all around to beat No. 4 seed West Virginia 61-58 Thursday night to advance to the West Regional final.

The Bulldogs (35-1) needed that defense to make their third Elite Eight in school history on a night that featured 51 fouls and only 34 made baskets. They also needed someone to make a key shot and Mathews delivered with the 3-pointer that made it 60-58.

“We had never come across that throughout the season. It wasn’t frustration. It was more like, I don’t know, confusion, trying to figure it out,” Mathews said of the shooting woes. “But just staying the course and just rallying around our guys and just thinking about the defensive end, helped my offense in the end.”

West Virginia (29-8) had three shots to tie the game but Tarik Phillip missed a shot from the lane and Jevon Carter missed two 3-pointers after Silas Melson made one foul shot. The Mountaineers rebounded both misses but couldn’t get another shot off in the final 13 seconds.

“To know you were so close and you gave everything you had and to come up sort, it hurts,” said Carter, who had a game-high 21 points.

Despite shooting 26.7 percent for the game, West Virginia stayed close and took a 58-55 lead on a 3-pointer by Carter with 1:47 to play. But the Mountaineers didn’t score again and went down to a crushing loss.

Nigel Williams-Goss answered with two free throws. After Daxter Miles Jr. missed two fouls shots and Nathan Adrian was blocked by Josh Perkins on the putback, Williams-Goss found Mathews in the corner for the open 3-pointer that proved the game-winner.

“You tell me another team in the country who can shoot 26 percent from the field against a No. 1 seed, 21 percent from 3 and still could have, should have won the game,” coach Bob Huggins said. “That says a lot about what kind of guys we have.”

Mathews, Przemek Karnowski and Johnathan Williams all had 13 points to lead the Bulldogs.

West Virginia: The Mountaineers could get nothing going offensively most of the night but a pair of 3-pointers by Carter in the second half helped them fight back from an eight-point deficit to briefly take the lead in the second half. The rest of the team made just 10 baskets.

Gonzaga: The Bulldogs struggled to get into their offense all game. When they managed to beat the Mountaineers relentless press, they couldn’t capitalize in the halfcourt. WCC Player of the Year Williams-Goss was held to 10 points on 2-for-10 shooting with five turnovers.

Gonzaga as made it to its third regional final to go along with eight Sweet 16 trips and 19 straight tournament appearances. All that’s missing is a trip to the Final Four.

“I don’t know that I have a monkey on my back. I certainly don’t wake up with one or walk around with one,” Few said. “I don’t think these guys think I have one. I don’t think my wife thinks I have one or anybody in my family, close friends. Fishing buddies never talk about it. So those are the only people that really matter to me.”

Carter’s go-ahead shot came after a lengthy replay review that gave West Virginia a second chance. Adrian appeared to go out of bounds under the basket in transition but the officials reviewed the play and determined that there was an inadvertent whistle.

The first half was far from an aesthetic masterpiece with 27 fouls and just 16 baskets. The teams combined for 29 percent shooting, including 2 for 16 from 3-point range as the game went into the break tied at 30.

Gonzaga plays the winner of the game between second-seeded Arizona and No. 11 seed Xavier for a spot in the Final Four.