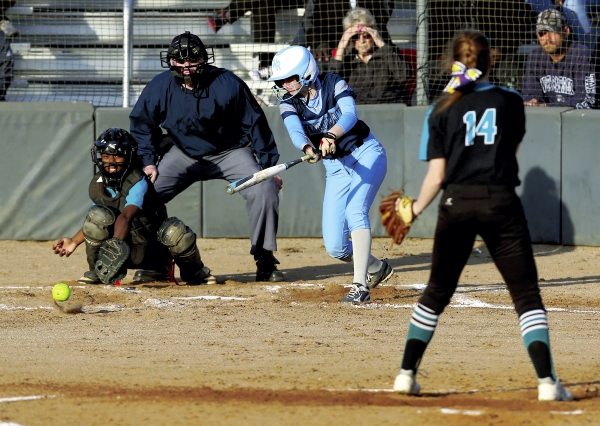 MOUNT ULLA — Through four innings, Cox Mill had bruised some softballs but had nothing to show for it.

But the Chargers didn’t get frustrated, and that was the key to Friday’s 5-1 South Piedmont Conference road win at West Rowan.

“West’s pitcher (Hannah Roberts) has a lot of movement and she was doing a very good job of keeping the ball away from our power,” Cox Mill coach Holly Harris said. “When we did hit balls hard, they were making some unbelievable defensive stops.”

West’s defense, anchored by shortstop Mary Sobataka, was stout early on, and Sobataka gave the Falcons a 1-0 lead in the bottom of the first when her oppposite-field single to right drove in leadoff batter Alexandra Linder.

“They were pitching me outside,” Sobataka said. “I knew I needed to go with the pitch, and I did.”

Roberts made that 1-0 lead stand up a long time, but Cox Mill’s Claudia Riddle singled to start the fifth, one of her three hits. Bailey Johnston’s double tied the game, and No. 9 batter Kayla Smith smacked the tie-breaking, two-run double to right that put the Chargers on top, 3-1.

“Cox Mill has got a lot of good hitters,” Sobataka said. “We knew we’d have to play really good defense to stop them.”

Cox Mill added a run in the sixth inning when Paysia Reed boomed a double to the right-center gap and Johnston delivered another clutch hit, stroking a single through the left side for a 4-1 lead.

West freshman Tori Hester relieved Roberts and got the last two outs in the sixth.

West (5-2, 5-2 SPC) had a chance to break through against Cox Mill’s sophomore hurler Madison Michael in the bottom of the sixth. The Falcons loaded the bases with two out, and Hester whacked a ball hard up the middle, but the Chargers smoothly handled the 6-4 force play, and a sliding Hannah Pratt was out in a close play at second base.

Cox Mill tacked on another run in the seventh inning on another double by Smith and a smash to left by Cameron Shaffner for a 5-1 cushion.

Michael only struck out three, but she made the Falcons swing the bats and the defense was sharp behind her.

“Michael is a sophomore who acts like a senior,” Harris said. “She’s a commander out there.”

Camryn Nooner hammered a long flyball to center in the bottom of the seventh, but Michael got the Falcons out 1-2-3, and the Chargers (8-1, 7-1 SPC) owned the victory.

“Our youth showed up a lot in our hitting tonight,” West coach Jimmy Greene said. “She was pitching us away to start, and then working in. We needed to just stay calm and hit the ball the other way, but we were getting too excited. We didn’t have very good at-bats.”

Cox Mill’s only league loss was to Central Cabarrus. West beat Central — badly — but that’s the dog-eat-dog nature of the SPC, where at least eight teams are dangerous.

“You have to respect every team in this league, or you’ll get beat,” Harris said. “West has a great team, and this is a good win for us.”