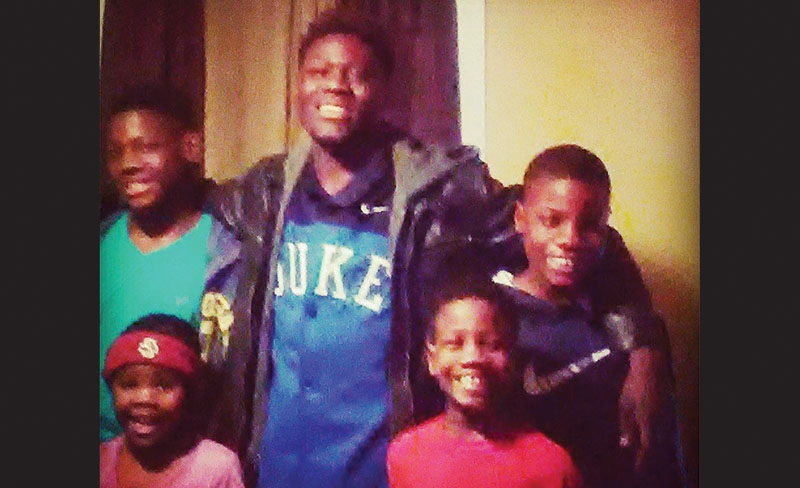 Myron Riley, center, is pictured with his siblings in this Facebook photo. He was shot Monday on South Fulton Street and remains in the hospital where he is stable. Submitted photo

SALISBURY — Valerie Benjamin is grateful today that the conversation she had with a Salisbury police officer on Tuesday turned out the way it did.

She’s thankful to God because the officer was telling Benjamin that her son had been shot in the back.

Benjamin, a single mother of five, said she realizes the conversation could have been to inform her of her son’s death.

“I’m saying, ‘God, all the glory belongs to you,’ because my son is still alive,” she said.

Benjamin moved to the Salisbury area from South Carolina a little over a year ago, seeking a better life for herself and her children.

Her son Myron Riley, 17, was shot once in the back in the 100 block of Ridge Avenue after what Salisbury police say was a confrontation. Police have continued to investigate but said the teen has not been cooperative.

Police officials said Riley on Tuesday had left Salisbury High School, where he is a student. After he was shot, he ran to nearby Mean Mug coffee shop, where patrons inside helped him before emergency responders arrived.

Local community organizer and pastor Antony Smith and others inside the shop prayed with Riley before he was taken to the hospital.

Benjamin said the plan God has for her son’s life is already written, but she’s thankful for how the situation turned out. She’s thankful for the people who prayed with him while in the coffee shop.

“I am grateful that his life wasn’t taken. He’s still here for a reason,” she said.

Benjamin said Thursday her son took a test at school then left for a nearby store. She said her son told her that someone followed him. Someone called his name or asked if his name was Myron, she said. He walked up to that person and asked what he wanted.

At some point, one person in the group who had a gun in his pocket pointed it at Riley. He swiped at the gun, and the person fired twice, missing him, Benjamin said. Riley turned and ran into the coffee shop. He had been shot once in the back, and the bullet exited his chest.

Benjamin said her son told her he didn’t think the person was going to use the gun.

Riley is still in stable condition and is working with a physical therapist to get him up and moving. He is talking with family and healing already, Benjamin said.

“He’s strong. I raised him to be strong,” Benjamin said.

Benjamin said she questioned God, asking him what he would have her do right now.

Right now, she’s spending time with her son in the hospital and also monitoring how the situation has affected her younger children.

Benjamin said she wants her son to know she’s there for him and that he has been her primary focus.

Anyone with information about the shooting is asked to contact the Salisbury Police Department at 704-638-5333 or CrimeStoppers at 866-639-5245. Tips may also be submitted online at http://tips.salisburyrowancrimestoppers.org/.