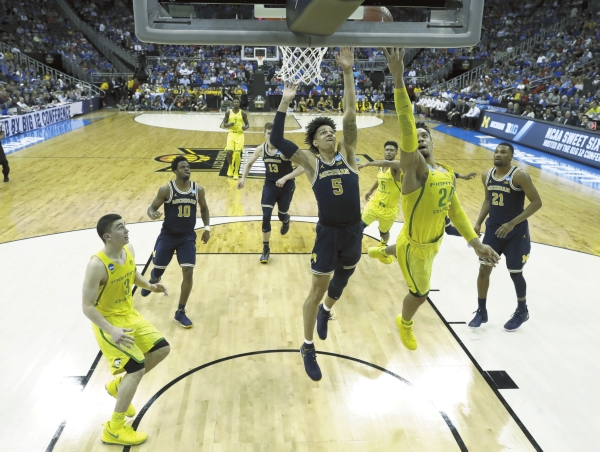 Oregon forward Dillon Brooks drives to the basket ahead of Michigan forward D.J. Wilson (5) during the second half of a regional semifinal of the NCAA men's college basketball tournament, Thursday, March 23, 2017, in Kansas City, Mo. (AP Photo/Charlie Riedel)

Dorsey scored 20 points and made the go-ahead layup with 1:08 left, and third-seeded Oregon held on to end No. 7 Michigan’s dramatic postseason run with a 69-68 victory in a Midwest Regional semifinal on Thursday night.

“We lean on him right now,” the Ducks’ Dylan Ennis said. “He’s playing his best basketball, and it’s coming at the right time.”

Dorsey’s recent surge has been timely, for sure. He’s scored 20 or more points in six straight games, a stretch that has seen Pac-12 player of the year Dillon Brooks struggle with his shot.

Oregon didn’t have the win secured until Derrick Walton Jr., who had carried the Wolverines the last three weeks, was off with his long jumper just before the buzzer.

For the Ducks (32-5), it’s on to the Elite Eight for the second straight year.

“The kids fought their hearts out this whole season,” Michigan coach John Beilein said, “but particularly this last six weeks to be more than a story. It was a great team. They were becoming a great team before the story. We weren’t sharp as we would have liked to have been today, but you have to credit Oregon with that.”

Jordan Bell had a double-double for the Ducks, with 16 points and 13 rebounds. Brooks added 12 points and Ennis had 10.

Walton led the Wolverines with 20 points, eight assists and five rebounds. Zak Irvin had 14 of his 19 points in the second half and DJ Wilson had 12 points.

The Ducks’ run to the regional final has come without big man Chris Boucher, who went out in the Pac-12 Tournament semifinals with a season-ending knee injury. Oregon had plenty of inside game without Boucher, outscoring the Wolverines 34-16 in the paint and outrebounding them 36-31.

Its biggest play in the post came after Walton had made a jumper to give Michigan a 68-65 lead. Ennis got fouled and went to the line for a one-and-one. He missed, and Bell swooped in for the offensive rebound and put it in to make it a one-point game.

“We have a play that we practice on, if one of us misses a free throw. We executed it perfectly,” Bell said.

After Walton missed a layup on the other end, Dorsey gave the Ducks the lead.

Ennis missed another free throw with 15 seconds left, giving Michigan one more chance. Oregon had two fouls to give and wanted to use them so Michigan would have to inbound the ball. The Ducks couldn’t get it done, though, and Walton was able to put up one more shot.

“We were supposed to foul,” Oregon coach Dana Altman said. “Dylan Ennis had an opportunity there. I was a little upset that he didn’t. Fortunately the ball didn’t go in.”

Michigan: The Wolverines have gone through a lot, with their plane skidding off the runway as they tried to fly to the Big Ten Tournament and advancing to the Sweet 16 as a No. 7 seed. Ultimately, fatigue might have caught up to them. They shot just 39.3 percent against the Ducks and didn’t seem to have that special ingredient they showed last week.

Oregon: The Ducks set the school record with their 32nd win and are off to the Elite Eight for the second straight year thanks to a big-time performance from Dorsey.

Michigan’s Moe Wagner scored a career-high 26 points in Sunday’s win over No. 2 seed Louisville. But he missed six of his first seven shots against the Ducks and finished with seven points after going 3 for 10.

Oregon won despite making just 9 of 16 free throws. The Ducks came in shooting 71 percent from the line. “Nine for 16 usually spells disaster at this time of year,” Altman said.

Michigan’s season is over.

Oregon plays Kansas or Purdue in a regional final Saturday.

This story has been corrected to show that Oregon player Dillon Brooks’ first name is spelled Dillon, not Dylan.