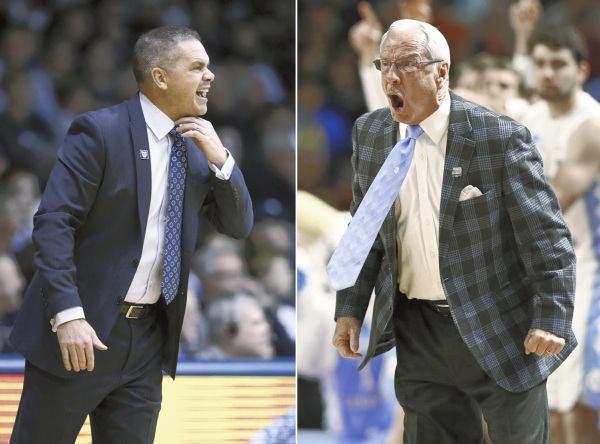 FILE - At left, in a Jan. 4, 2017, file photo, Butler head coach Chris Holtman yells in the first half of an NCAA college basketball game against Villanova in Indianapolis. At right, in a March 19, 2017, file photo, North Carolina head coach Roy Williams shouts at his team during the first half in a second-round NCAA men's college basketball tournament game against Arkansas in Greenville, S.C. Butler and North Carolina meet in an NCAA college basketball tournament regional semifinal game in Memphis, Tenn., on Friday, March 24. (AP Photo/File)

MEMPHIS, Tenn. (AP) — Three of college basketball’s blue bloods, along with a blue bulldog from Indiana that has had lots of success of its own, have gathered in Memphis for a marquee showdown in the Sweet 16.

North Carolina, Kentucky and UCLA are joined by upstart Butler in the South Regional — the only region where the top four seeds all advanced after the opening weekend. Top-seeded North Carolina plays Butler Friday night, followed by No. 2 seed Kentucky and third-seeded UCLA facing off in the second game.

At stake is a spot in the Elite Eight and chance to earn a berth in the Final Four.  These iconic programs have plenty of championship banners hanging from the rafters as they look to add yet another, with Butler hoping to capture its first.

UCLA (31-4) has the most national championships with 11 — 10 from legendary coach John Wooden. Kentucky (31-5) of the Southeastern Conference has eight — a quartet from Adolph Rupp with one each from Joe B. Hall, Rick Pitino, Tubby Smith and John Calipari. North Carolina (29-7) of the Atlantic Coast Conference is tied for third with five championships and has been to more Final Fours (19) than any other school.

And then there’s Butler (25-8) of the Big East. The Bulldogs may lack titles, but they have become the tournament darlings in recent seasons reaching the national championship game in 2010 and 2011.

“I happen to think right now, Butler is better than any of them, and that’s the team we’re getting ready to play,” Williams said.

The Bulldogs’ battle against the trio of historic programs is only one of the subplots of this region. There are well-established coaches, like Calipari and Williams. Then there is Steve Alford, who hopes coach UCLA to its 12th title, but won a national crown playing at Indiana.

There is Chris Holtmann, 45, in only his third year as a head coach at Butler.

Here are some other things to watch in the South:

CHALK BRACKET: “Obviously there’s opinions and arguments, but we feel like this is obviously the toughest region,” Alford said. “And you’re probably going to have to play to play very good basketball because all four of these teams are capable of advancing to the Final Four.”

PRESIDENTIAL TIES: Vice President Mike Pence might in attendance for the first semifinal to watch Butler play North Carolina. Pence was governor of Indiana before becoming President Donald Trump’s running mate and worked in Indianapolis— home of the Bulldogs. Oh, and Pence’s wife, Karen, attended Butler, and the family lived near campus. “Anytime you have an elected official come to a game and support your program, you’re excited about that,” Holtmann said.

HIGH-OCTANE POTENTIAL: There’s a possibility of some high-scoring games Friday night with three of the top 10 teams in points scored part of the South Region. UCLA leads the nation in scoring at 90.2 points a game, while Kentucky is ninth at 85.2, only slightly ahead of North Carolina at 85.1. Butler averages 76.2 points a game – 105th in the nation. But North Carolina players know there is a balance.

“I remember the scouting report, they told us early, they was like: ‘Don’t think you’re not going to be guarded,’ “ junior swingman Theo Pinson recalled. “Every time you catch the ball, they’re going to be there. It’s just how they are.”

GONE FISHING: Butler guard Avery Woodson transferred for his final season of eligibility after graduating from Memphis.  Woodson didn’t immediately respond when Butler called to recruit him. “I was actually fishing with one of my friends from here in Memphis,” Woodson said. “I looked at the phone, and it had a 317 area code, and it said Indianapolis, Indiana. I thought about it: ‘Well, that could be Butler.’ But, I was fishing, so obviously, I’m not going to answer the phone.”

GOOD MEMORIES: This isn’t North Carolina’s first time in Memphis for a regional semifinal as the No. 1 seed. In 2009, the Tar Heels beat Gonzaga and Oklahoma on the way to their last national championship. “Memphis is one of my favorite places,” Williams said with a big grin.