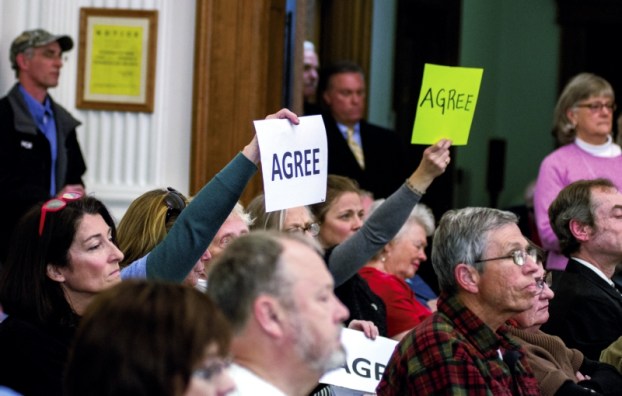 People show their agreement with a constituent's criticism of legislators during a town hall meeting with Rowan County legislators in Salisbury on March 16, 2017. Kristi Craven/Salisbury Post

My Turn, Jimmie Moomaw: You call that a town hall meeting? At a time in our country when congressmen seem to be doing everything they can to avoid meeting with their constituents, I found it heartening when I read that state Rep. Harry Warren, R-77, state Rep. Carl Ford, R-76, and state Sen. Tom McInnis, R-25, were coming to Salisbury to hold a town hall meeting.

“Town hall meetings in the United States have long served as important political rituals for leaders to maintain their legitimacy … candidates seeking political office have used such rituals of political communication to display deference to ordinary people as the ultimate power in representative government.” (Lind, Colene J. “Democratic Deference in a Republican Primary.”)

As it turned out, the Republican town hall strategy was simple. Talk as long as possible in order to defer and avoid audience participation for as long as possible. According to Post reporter Josh Bergeron, “The lengthy period without audience questions drew the ire of some in the crowd.” My conversations with frustrated attendees affirmed Bergeron’s observation.

Bergeron also noted that “when audience members expressed displeasure with a statement, the legislators often became visibly frustrated.” Given that only one hour was devoted for a town hall, few questions were ever asked and fewer answered.

I address the following comments and questions that should have been asked and answered Thursday night as an open letter to Messrs. Warren, Ford and McInnis.

• House Bill 2: HB2 continues to be detrimental on many levels: (1) It is polarizing and divisive. (2) It is an economic catastrophe (costing the state $560 million so far and counting. (3) The “Department of Justice has said that HB2 violates seven federal laws including Title IX of the Education Amendment, Title VII of the Civil Rights Act and the Violence Against Women. And (4) state regulation of bathroom usage represents a wholly unwarranted government intrusion into personal lives (contrary to Republican claims to favor less government).

Given these negatives, my question is what is your justification for supporting HB2?

• Governor’s powers: On its face, the package of bills designed to strip the governor’s appointment powers seems petty, punitive and partisan at the lowest level. Since the people of North Carolina elected a Democrat as governor, there is no mandate for Republicans to reduce the governor’s power. I would think that at some point in the future Republicans would anticipate electing a Republican governor again. In that light, this measure seems not only unnecessary, but also short-sighted.

What is your personal rationale for supporting these measures?

Since the current method of electing local school board members isn’t broken, what is it that you think you are fixing, and what result will it produce that is superior to what we are doing now?

• Redistricting: It is no secret that the current process of partisan gerrymandering of districts has been a disaster, been ruled unconstitutional and thrown out in federal court. HB 200 calls for the creation of a bipartisan commission. Instead of lawmakers drawing their own districts for partisan advantage, a nonpartisan legislative staff would create congressional and legislative maps without political consideration.

Can we count on you to support the creation of a bipartisan commission to eliminate unconstitutional racial gerrymandering? (If not, why?)

• Peaceful protests: I trust that legislators Warren , Ford and McInnis agree that participating in protests is a basic constitutional right guaranteed by the First Amendment. I understand that there is now a bill in the N.C. House that defines “economic terrorism” as “a criminal offense that impedes or disrupts the regular flow of business.” The bill would also designate the penalty for economic terrorism as a Class H felony, “which typically carries a prison sentence of 4 to 25 months.”

Can we count on you to oppose any legislation that criminalizes peaceful protest or labels protests as a form of “economic terrorism?”

At the end of the article about the meeting, Warren is quoted as saying he plans to hold more town hall meetings this year. I urge him to begin by coming back to Salisbury and doing the next one right by allowing more time for questions and listening carefully to the concerns of the constituents who elected him. That’s how representative government works!

What message do signs send? Is there anyone out there that is interested in banning tobacco at the RoCo parks?... read more