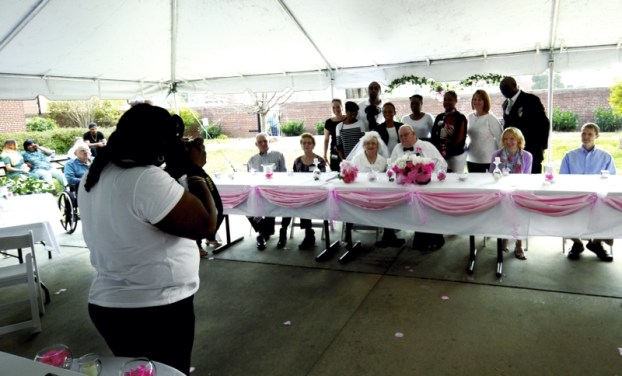 KRISTI CRAVEN/ SALISBURY POST Angie Bell, front, takes a picture of the Wedding Party at Bruce and Nancy Bolick's 50th Wedding Anniversary where they also renewed their vows in Salisbury on March 21, 2017. KRISTI CRAVEN/ SALISBURY POST Nancy Bolick, left, smiles after getting a kiss from her husband Bruce at their 50th wedding anniversary where they also renewed their vows in Salisbury on March 21, 2017.

SALISBURY — As she and husband Bruce were escorted to the head table at their courtyard reception Tuesday afternoon, Nancy Bolick  had a question:

“Am I supposed to throw the bouquet?”

Just minutes earlier, in the lobby of the N.C. State Veterans Home, Bruce and Nancy Bolick had renewed their wedding vows, the same ones they used almost 50 years ago when they were married Aug. 12, 1967, at Trinity United Church of Christ in Conover.

Thanks to the activities staff at the rest home, the ceremony and reception had all the trappings — an official wedding photographer (Angie Bell), a minister (chaplain Bill Ragsdale), a live band (Darrell Connor’s group), catered food, a wedding cake, flowers, Bruce in his white shirt and bow tie, and Nancy in a smart white suit and veil.

Nancy’s father walked her down the church aisle a half century earlier. This time, with a recording of the wedding march playing, Nancy strolled in with her son-in-law, Scott Lykins, who was attending from Raleigh with Bruce and Nancy’s daughter, Stephanie.

“It’s a celebration of their life together,” Stephanie said, taking in everything Tuesday.

Ragsdale took a moment away from the vows to insert a personal note. He said he thought it was important to witness and be thankful for a renewal ceremony honoring a couple married 50 years, especially during a day when  so many couples divorce or “shack up.”

Because they were already married, Ragsdale asked Bruce and Nancy to answer “I have” to the vows instead of the traditional “I do” or “I will.”

“We’re going to skip the ring,” Ragsdale also told Bruce and Nancy. “You already have the rings.”

But the couple did not skip a kiss at the end. After the smooch, Nancy lay her head on one of Bruce’s big shoulders. They then shared another kiss.

“That’s right, Bruce!” someone shouted from the crowd.

Bruce Bolick has been a resident of the N.C. State Veterans Home since 2013, Many years ago, he suffered a stroke, and today he depends on a motorized wheelchair. Nancy drives from Conover and visits him every other day, so she is a familiar face to residents and staff.

Their wedding renewal ceremony and reception represented the Committed to Caring Committee’s annual “Second Wind Dreams” project, in which the Pruitt Health staff tries to create a special experience for a resident or the rest home as a whole.

When the activity staff members first broached the idea of the wedding and reception to Nancy, they had no idea the Bolicks were approaching their 50th wedding anniversary.

“That made it even more special,” Nancy said. “I think’s it’s wonderful and we’re very honored. … So many people worked on it.”

Before his stroke, Bruce Bolick was vice president of an environmental consulting firm and an avid hunter — his room at the rest home has many mounted animals. His education in wildlife biology at N.C. State University was interrupted by a stint in the U.S. Army.

Nancy lived with him when Bruce was serving in Army medical services and stationed at Fort Sam Houston in Texas and Fort Lewis in Washington state. They have two children and six grandchildren.

As kids, Nancy and Bruce grew up in Conover and attended the same high school. But they didn’t start dating until he was in college and she was attending business school. Until Bruce had finished at State, Nancy had to be the breadwinner.

Much of the lobby and courtyard was decorated in pink and white Tuesday. There was a huge, heart-shaped arrangement of flowers stationed behind the couple’s head table. Staff, residents, family and friends attended.

“Oh, my goodness, y’all have outdone yourself,”  Nancy said when she first saw the elaborate setting.

Ragsdale also gave high praise to the activities staff: “They have busted a gut.”

Ragsdale has served as chaplain since 2004, the year the rest home opened, but it was his first wedding renewal ceremony at the facility.

The cake Tuesday included a photograph of Bruce and Nancy from their wedding in 1967. Their wedding album from 50 years ago also was close by.

What attracted her to Bruce back in the day? Nancy said it was pretty simple: Bruce came from a good Christian family, and she liked that he was preparing himself so he would be able to support a family.

And he’s a good kisser. Now throw the bouquet.

By Mark Wineka mark.wineka@salisburypost.com GRANITE QUARRY — While one person said he didn’t know “how in the world the people of... read more