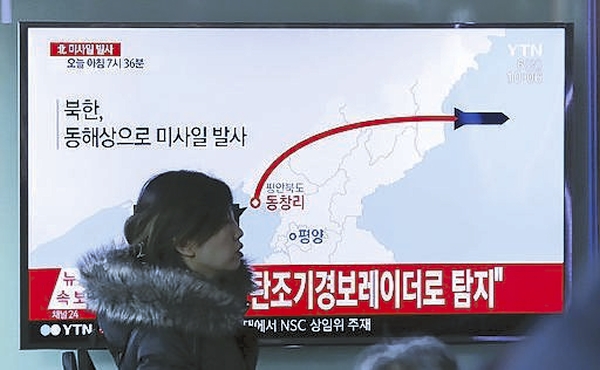 It’s not just that Kim’s outlaw North Korean regime has accelerated its nuclear weapons capacity and delivery capability, or that Kim sees nuclear weapons as his insurance policy against adversaries.

It’s also that Trump has displayed little appreciation of history or knowledge and a compulsion to show that he’s tough.

Trump has called Kim a “madman,” one of the few things he has gotten right about North Korea. Dealing with him, though, requires measured patience and smart diplomacy — not Trump’s forte — and a reliance on alliances and relationships that he has dismissed.

On his Asia trip, Secretary of State Rex Tillerson said that diplomacy with North Korea hasn’t worked and that there’d be a “new approach.” That sounds like just talk. More important, Defense Secretary James Mattis impressed Asia experts during his visit last month to Japan and South Korea, in essence assuring the allies that U.S. commitments were unchanged despite Trump’s “America First” oratory.

There are few Asia specialists in this slow-to-form administration. But if Trump listens to Mattis and H.R. McMaster, his national security adviser, there will be a sense of relief in Tokyo, Seoul and Washington about the approach to North Korea. Let’s hope the president doesn’t revert instead to his penchant for relying on gut instincts or his nationalist Svengali, Steve Bannon.

Trump did advocate a greater nuclear presence in Asia during the 2016 presidential campaign. He declared that China has “total control” over North Korea and has hinted that he’s going to tell China’s President Xi Jinping to bring the North Korean dictator to his knees or else.

But China doesn’t have anything close to total control over Kim Jung-un. It has contempt for his recklessness and alarm at his nuclear development. Above all, Beijing fears collapse of the regime, which would bring millions of refugees pouring across the border. The Chinese want to tamp down Kim, but their interests aren’t the same as America’s.

“China’s influence is limited, but it has practical leverage if it chooses to use it,” said Tony Blinken, deputy secretary of state in the administration of President Barack Obama. For example, the Chinese did suspend coal imports from North Korea  in line with a United Nations resolution. But the “or else” — Trump has suggested he could punish China on trade — won’t scare Beijing.

The dilemma on what to do is compounded by political instability in South Korea, whose hard-line President Park Geun-hye was just thrown out of office in a corruption inquiry. A new leader will be elected in May.

A fear expressed by some experts is that Trump, who fancies himself a masterful negotiator, would agree to offer less resistance to China’s ambitions in the South China Sea in exchange for a promise by Xi to bring more pressure on North Korea.

The other fear is that the megalomaniac North Korean dictator could goad Trump into a mano-a-mano exchange that starts on Twitter and ends who-knows-where.

Economic sanctions are hurting North Korea. Cyber attacks may temporarily impede its nuclear-weapons program. And to China’s consternation, the U.S. is deploying an anti-missile system in South Korea. But over a quarter century, with Republican and Democratic administrations alike, neither carrots nor sticks have effectively constrained the outlaw regime. With no good solution, the least bad approach would be to try to negotiate some interim agreement in cooperation with China, Japan and South Korea that freezes North Korea’s nuclear weapons programs, with guaranteed verification, in return for lifting some economic sanctions while seeking a longer-term deal.

There is a parallel: the nuclear treaty Obama negotiated with Iran, which Trump called the “worst deal” in history.