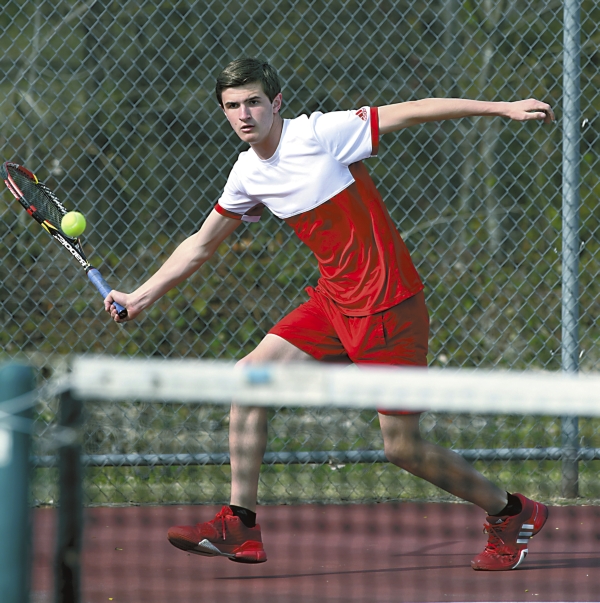 Wayne Hinshaw/for the Salisbury Post ... Salisbury’s Roarke Burton, playing No. 2 singles, makes a return to his opponent during Wednesday’s high school tennis match against Lexington. Burton won and the Hornets won the match, 7-2. SALISBURY —  The Central Carolina Conference boys tennis season has about a month to live, but already Salisbury has assumed its usual perch atop the league standings.

Three matches into a 10-match schedule, the Hornets are unbeaten in conference play and honing in on their eighth consecutive championship.

“That would be nice,” fourth-year coach Milton Griffith said Wednesday, moments after Salisbury collected a 7-2 win against visiting Lexington. “There’s a long way to go and a lot can happen, but this was important. Everybody felt the pressure today. We have a lot to live up to.”

Despite losing four of its top six players from a year ago and boasting no seniors, Salisbury (7-1 overall) bested a Lexington (6-3, 2-1) team expected to be its closest rival.

“Nobody thinks we can do this again,” junior Adam Drye said. “We’re a different team. We had to come out here and start proving that we can.”

“They put up more of a fight than we expected,” said Burton, who also won his second-singles match in two sets. “They played well, but today, we played better.”

Lexington’s Varner Sink — enjoying the third year of his second stint as coach —  had to agree.

“We played as well as we could,” he said. “But Salisbury is impressive. We’ve had them in our sights since the first practice. They’re young like we are, but still the team to beat.”

No one had a longer day than sophomore Ethan McGee, Salisbury’s first-singles player. He battled Lexington’s Seth Worley for nearly 90 minutes before falling 4-6, 7-5 (3-10), suffering his second loss in eight matches this season.

“I lost all my serves,” he said. “Then I lost the first set and tried to come back harder. It was tough.”

Salisbury’s only other loss came at sixth singles, where German exchange student Paul Weitz fell 4-6, 6-3 and 1-10 in a tiebreaker to unbeaten sophomore Liam Blackerby. Weitz rebounded at third-doubles, where he paired with Sean Archer for an 8-5 decision over Blackerby and Andy Casados.

McGee fared better at first-doubles, teaming with the ever-enthusiastic Jander Rodas-Palacios for an 8-5 nod over Worley and Jacob Carlson. Earlier, Rodas-Palacios quickly dispatched Inabinett, 6-0 and 6-2, at third singles.

“My shots were consistent and my serves were going in,” Rodas-Palacios, a sophomore, said after improving to 8-0. “It’s been a pretty good season considering I didn’t get any court time last year. But I practiced a lot. Every weekend I’d go out and hit with anyone who wanted to.”

Griffith called Rodas-Palacios “the team jokester,” and added: “There’s such a big difference in his game from last year to this year. He’s so determined to do well. He doesn’t always play real pretty, but he hustles. That’s what we want.”

Archer’s 6-0, 6-4 win against Burke at fourth-singles completed the scoring sheet. It left youthful Salisbury — next year’s team on paper — looking down at rest of the conference. The Hornets have three CCC road matches scheduled next week, including another pivotal one at Lexington next Thursday.

“This was a good match, but we’re still coming together,” Griffith concluded. “We have the potential to be this year’s team. Once they realize that, once they get that killer instinct, they’ll be dangerous.”

Prep football: Austin Chrismon to get his chance at UNC

By Mike London mike.london@salisburypost.com LANDIS —  No one has promised Austin Chrismon anything — other than a walk-on spot on... read more