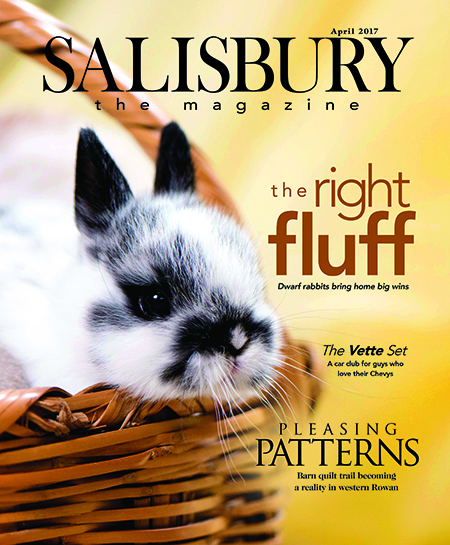 April 2017 SALISBURY the magazine, now available at the Salisbury Post and other local businesses

The April 2017 edition of SALISBURY the magazine is now available
A Note from the Editor, Mark Wineka

Helen Brown has told the story many times — about 4-year-old Ricky Weiss who had cystic fibrosis.

Without his mother’s knowing, Ricky listened to her on the telephone, calling people on behalf of the Cystic Fibrosis Foundation. She was trying to raise funds for research — all three of her sons had CF.

One day Ricky told his mother he knew about the calls. Confused, because she thought she had kept her telephoning secret, the mother asked Ricky what he thought the calls were about. “You are working for 65 roses,” he said.

Today, “65 roses” is a term to help young children put a name on their cystic fibrosis, and it has become a registered trademark of the CF Foundation.

Salisbury’s Helen Brown is not unlike Ricky’s mother. Her two grandchildren, now grown, have lived their whole lives with cystic fibrosis, and Helen has done her part in raising money for research. Instead of calling people on the telephone, however, Helen has held huge community yard sales and other events to raise funds for the CF Foundation since 2001.

Along the way, she and her husband, Ralph, have assembled quite a team of dedicated CF volunteers.

“It may not be tattooed anywhere,” volunteer and friend Brenda Zimmerman said, “but rare is the day that volunteers do not think about the importance of Helen’s mission and the impact her life has on each and every person who has stepped in to help.”

The yard sales are sanctioned by CF, and the research foundation sends shirts each year for the volunteers to wear. Local eateries donate some of the food for the local CF team, from the setup on Thursday until the end of the sale on Saturday. The Browns take care of the rest.

“I have always been a goal-oriented person in both my personal and professional life,” says Helen, now 83. “I feel that measurement of my success is through attainment of goals. … Thanks to many wonderful people who have touched my life, I have met most of my goals.”

Helen Brown is our “Rowan Original” this month. I invite you to read the Q&A with Helen to learn just how much her biannual yard sales have raised for cystic fibrosis research. You will be blown away.

Elsewhere in this issue of Salisbury the Magazine, you’ll learn about the growing number of beautifully painted barn quilts that are dotting the Rowan County countryside, especially in the western and southwestern ends.

A dedicated group of people — the painters, Mount Ulla Preservation Society, the Salisbury-Rowan Quilters Guild and the Rowan County Grange — are combining forces to put together a trail that could someday become an important asset to Rowan tourism.

In a nod to the Easter holiday coming later in April, Amanda Raymond and photographer Jon Lakey bring us wascally-wabbit cuteness in the form of Netherland Dwarf rabbits, raised in Rowan County by Tamie File. Do not bunny hop over that story.

When he’s not playing tennis for the Catawba College men’s team, Salisbury High grad Christopher Derrick spends time with his camera, shooting some impressive landscapes throughout North Carolina. This issue shares some of his photographs.

You might have seen members of the Vette Set Corvette & Old Chevy Club with their cars in parades, at shows and as the drawing card for fundraisers. The core group of these car enthusiasts has been together now for 20 years, and the club has some beautiful cars, as you will see.

Deirdre Parker Smith introduces us to the saucy side of Joel Hail. Rowan-Salisbury Teacher of the Year Anthony Johnson offers a great message in our ‘Salisbury’s the Place column, and back on the subject of cuteness, you’ll want to read Rebecca Rider’s story about Dollie, the therapy dog at Partners in Learning.

Helen Brown’s CF volunteers used to kid her about never being able to settle on $10 or $15 for certain items at her yard sales. So her favorite price always turned out to be $12.50.

We think this issue of Salisbury the Magazine has $12.50 worth of cuteness alone.

By Sara Hill For the Salisbury Post It only takes a word like “biscuits” to take me back to my... read more