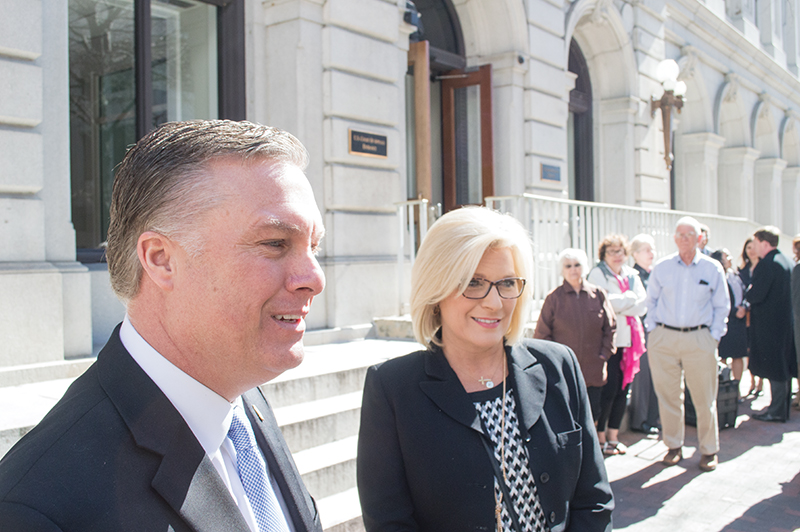 RICHMOND, Va. — Rowan County’s prayer lawsuit got a second shot in the 4th Circuit Court of Appeals on Wednesday when a panel of 15 judges heard oral arguments.

The lawsuit — known as Lund vs. Rowan County for the three residents who filed the  suit, Nan Lund, Robert Voelker and Lisa Montag-Siegel — centers on whether county commissioners can offer sectarian prayers at the start of their meetings.

In question is a specific period of overwhelmingly Christian prayers said at board meetings from 2007 to 2013. Last year, attorneys argued in front of a three-judge panel, which found the prayer practices constitutional. On Wednesday, arguments were in front of all 15 judges for the 4th Circuit Court of Appeals in what is known as an en banc review.

In the suit, the North Carolina ACLU represents Lund, Voelker and Montag-Siegel.

Texas-based National Center for Life and Liberty, which has brought in other attorneys to help with the case, is representing the Rowan County Board of Commissioners at no cost.

With the courtroom filled to capacity, most of Wednesday’s oral arguments centered around the content of prayer and the identity of those offering prayers — the commissioners.

“Sectarian references are part of that tradition,” Ho said.

Later, Judge James A. Wynn challenged the idea that long-standing traditions alone could dictate what’s constitutional. Slavery would still be legal if that were the case, Wynn said.

Early and often, judges challenged Ho about the content of prayers and whether commissioners’ past actions were an attempt to proselytize or convert people attending their meetings. Some prayers may stray close to an unacceptable level, but they don’t rise to the level of exploiting attendees, Ho said.

Judges asked Ho if county commissioners could legally and repeatedly recite well-known Christian prayers such as the Apostles Creed. She contended that commissioners could, as long as the prayers remain solemn and respectful in tone.

She was also asked about whether people might be implicitly coerced to participate in prayers. They might feel uncomfortable leaving a meeting with relatively few attendees, all of whom stood for prayers, said Judge J. Harvie Wilkinson.

“Those feelings do not rise to the level of constitutional coercion,” Ho responded.

Often, judges on Wednesday engaged in offering bits of opinion with questions. Judge J. Harvie Wilkinson was a frequent example.

“If this practices stands, I really don’t know where we go from here,” said Wilkinson, who wrote the dissent in the prior 4th Circuit opinion.

“We’re on our way to making your willingness to pray a test for public office,” Wilkinson said.

Shortly after that, Judge Dennis Shedd jokingly asked Brook if he would like the court to order that Rowan County voters elect some non-Christians to the Board of Commissioners. Alternatively, he asked Brook if it would be easier to simply eliminate prayer from meetings altogether.

Throughout his oral argument, Brook stressed that the identity of prayer givers ranks as the primary complaint about commissioners’ prayers. The content of prayers, however, is relevant, Brook said. He said there is no long-standing tradition of the types of prayers offered before the Rowan County meetings and asked the court to uphold a District Court ruling that found commissioners prayers unconstitutional.

After oral arguments, attorney David Gibbs, who represents Rowan County, said arguments were well put together by both sides. Depending on the ruling, Rowan County’s case could have wide-reaching implications on local government meetings, Gibbs said. Governing bodies from zoning boards to the U.S. Congress offer prays in a similar manner as Rowan County, he said.

“If the 4th Circuit Court of Appeals were to say legislators cannot pray and they issue some ruling to that effect … that would be an act of judicial decision that would have huge impact on the face of government in America,” Gibbs said.

Neither Gibbs nor County Commissioners Chairman Greg Edds would say with certainty that the county would appeal to the Supreme Court if it receives an unfavorable ruling from the 4th Circuit en banc panel.

In addition to attorneys for both sides, West Virginia Solicitor General Elbert Lin on Wednesday also argued in front of the en banc panel. Lin represents a consortium of states that signed on to the lawsuit in support of Rowan County. In addition to West Virginia, states supporting Rowan County include Alabama, Arizona, Arkansas, Florida, Indiana, Michigan, Nebraska, Nevada, Ohio, Oklahoma, South Carolina and Texas.

In a news conference after Wednesday’s arguments, Brook reiterated statements made in court. A broader issue than Rowan County’s prayers, he said, is whether people can participate “in the most direct form of government, self-governance, without having religious beliefs pressed on you by your elected officials.” Elected officials should seek to make it easier to participate in government, he said, rather than putting up “burdensome, theological hurdles.”

Brook said the Supreme Court “is always an option” if the 4th Circuit returns an unfavorable ruling. Brook was joined during the post-court news conference by Lund, Voelker and Montag-Siegel.

There is no deadline for the 4th Circuit Court of Appeals ruling. In 2016, the court heard oral arguments for four en banc reviews. The court has returned opinions in three of those four cases. In one case, judges took four months to rule. Another took slightly more than nine months. The third took about two months.